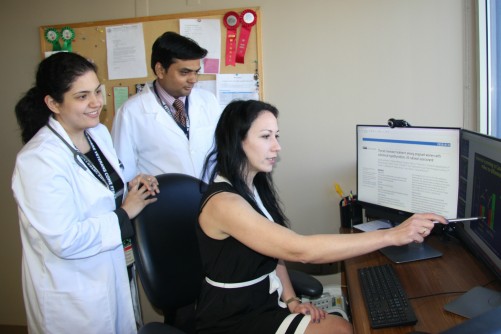 Newswise — Feb. 23, 2017 | In the first national study on the topic, a University of Arkansas for Medical Sciences (UAMS) researcher found evidence to suggest that fewer pregnant women with a mildly underactive thyroid should be treated than previously recommended.

UAMS’ Spyridoula Maraka, M.D., published the findings recently in The BMJ, an international peer-reviewed medical journal published since 1840 and ranked fourth in impact among general medical journals. She is an assistant professor in the Division of Endocrinology and Metabolism in the UAMS College of Medicine’s Department of Internal Medicine as well as a staff physician at the Central Arkansas Veterans Healthcare System and research collaborator at the Mayo Clinic.

“This is a groundbreaking study that has received international attention and is likely to change how doctors decide which women to treat for subclinical hypothyroidism,” said Stavros C. Manolagas, M.D., Ph.D., director of the Division of Endocrinology and Metabolism. “We are very pleased and proud to have Dr. Maraka at UAMS and are confident that this very talented clinician and investigator will continue to make major contributions to the health of Arkansans and patients around the world.”

Physicians use bloodwork to look for elevated thyroid-stimulating-hormone (TSH) levels as an indication of subclinical hypothyroidism. It is commonly treated with the thyroid-hormone therapy levothyroxine.

When Maraka began her study, the Endocrine Society recommended that pregnant women with TSH levels from 2.5 mlU/L and higher be treated. Maraka estimated that if this guideline was consistently followed, it would have a wide impact, applying to 15 percent of pregnant women in the United States, or about 600,000 a year. In fact, Maraka and her team found that only 16 percent of patients diagnosed with subclinical hypothyroidism received treatment – an indication that the guidelines are not being followed widely, either because there is not widespread awareness or because physicians were reluctant to follow the guidelines.

“The previous guideline to treat all pregnant women with subclinical hypothyroidism within a certain range was controversial because many physicians felt it was not based on good data. There were associations, but not studies that looked at causality or specific treatments and their effectiveness or side effects,” Maraka said. “And we don’t want to over treat patients, especially if the treatments have side effects.”

The study used information from a national insurance database that included patients with private insurance and Medicare Advantage enrollees, Maraka said, noting that researchers think the database provides a diverse sample population suitable for studies of this kind. Maraka and her team found 5,405 pregnant women in the database with subclinical hypothyroidism, 843 of whom received treatment.

In the second stage, the researchers divided the treated women into two groups depending on the severity of their subclinical hypothyroidism and compared each group to the women with subclinical hypothyroidism who were not treated. The women with TSH levels of 2.5-4 mlU/L were the “mild” group, while the women with TSH levels of 4.1 mlU/L or higher were the “severe” group. The researchers found that the severe group saw the biggest drop in pregnancy loss compared to untreated women, without the increase in complications.

“When we looked deeper into the data and divided the patients based on the degree of thyroid dysfunction, the patients who really benefitted where the ones with the higher TSH – and without having the adverse effects,” Maraka said. “Our conclusion is that women with the TSH level of above 4 should be started with the levothyroxine treatment because we see that they experience so much less pregnancy loss, but we should still do other studies to make sure we are doing the best thing for patient safety. The fact that some patients are still experiencing these complications indicates that there still may be issues at play that warrant further study.”

The guidelines for treating subclinical hypothyroidism in pregnant women have been controversial and there has been significant medical interest in Maraka’s findings. Her study was completed in June 2016, accepted for publication in December, and by the time the article was published on Jan. 25, the American Thyroid Association had issued new guidelines, raising the TSH level threshold before treatment is recommended.

“The guidelines have moved in the same direction suggested by our study, and while disagreement remains prevalent in this area, everyone agrees we need more studies to determine the best guidelines for improving patient outcomes,” Maraka said.

The next annual meeting of the American Thyroid Association will be in Oct. 18-22 in Victoria, Canada, and Maraka is scheduled as one of the presenters.

Maraka earned her medical degree from the University of Athens School of Medicine and a master’s degree in clinical and translational science from the Mayo Graduate School in the Mayo Clinic College of Medicine. She remains a research collaborator with the Mayo Clinic and came to UAMS and the Central Arkansas Veterans Healthcare System in October 2016.