University of Minnesota College of Science and Engineering 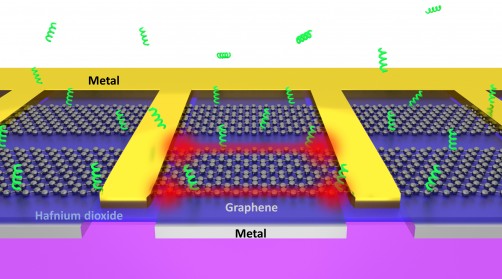 Atomically sharp edges of electrically driven graphene can act as “tweezers” that rapidly trap biomolecules from the surrounding solution. 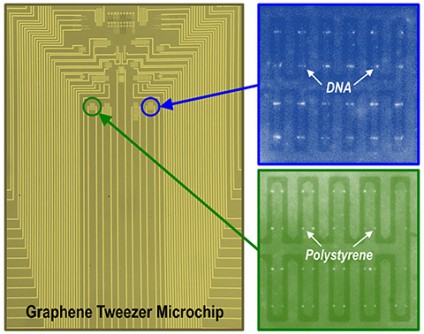 Newswise — MINNEAPOLIS/ST. PAUL (11/30/2017) — Researchers from the University of Minnesota College of Science and Engineering have found yet another remarkable use for the wonder material graphene—tiny electronic “tweezers” that can grab biomolecules floating in water with incredible efficiency. This capability could lead to a revolutionary handheld disease diagnostic system that could be run on a smart phone.

Graphene, a material made of a single layer of carbon atoms, was discovered more than a decade ago and has enthralled researchers with its range of amazing properties that have found uses in many new applications from microelectronics to solar cells.

The graphene tweezers developed at the University of Minnesota are vastly more effective at trapping particles compared to other techniques used in the past due to the fact that graphene is a single atom thick, less than 1 billionth of a meter.

The research study was published in Nature Communications, a leading journal in the field of nanomaterials and devices.

“Graphene is the thinnest material ever discovered, and it is this property that allows us to make these tweezers so efficient. No other material can come close,” said research team leader Sang-Hyun Oh, a Sanford P. Bordeau Professor in the University of Minnesota’s Department of Electrical and Computer Engineering. “To build efficient electronic tweezers to grab biomolecules, basically we need to create miniaturized lightning rods and concentrate huge amount of electrical flux on the sharp tip. The edges of graphene are the sharpest lightning rods.”

The team also showed that the graphene tweezers could be used for a wide range of physical and biological applications by trapping semiconductor nanocrystals, nanodiamond particles, and even DNA molecules. Normally this type of trapping would require high voltages, restricting it to a laboratory environment, but graphene tweezers can trap small DNA molecules at around 1 Volt, meaning that this could work on portable devices such as mobile phones.

Using the University of Minnesota’s state-of-the-art nanofabrication facilities at the Minnesota Nano Center, electrical and computer engineering Professor Steven Koester’s team made the graphene tweezers by creating a sandwich structure where a thin insulating material call hafnium dioxide is sandwiched between a metal electrode on one side and graphene on the other. Hafnium dioxide is a material that is commonly used in today’s advanced microchips.

“One of the great things about graphene is it is compatible with standard processing tools in the semiconductor industry, which will make it much easier to commercialize these devices in the future,” said Koester, who led the effort to fabricate the graphene devices.

“Since we are the first to demonstrate such low-power trapping of biomolecules using graphene tweezers, more work still needs to be done to determine the theoretical limits for a fully optimized device,” said Avijit Barik, a University of Minnesota electrical and computer engineering graduate student and lead author of the study. “For this initial demonstration, we have used sophisticated laboratory tools such as a fluorescence microscope and electronic instruments. Our ultimate goal is to miniaturize the entire apparatus into a single microchip that is operated by a mobile phone.”

Tweezers that can 'feel'

Another exciting prospect for this technology that separates graphene tweezers from metal-based devices is that graphene can also “feel” the trapped biomolecules. In other words, the tweezers can be used as biosensors with exquisite sensitivity that can be displayed using simple electronic techniques.

“Graphene is an extremely versatile material,” Koester said. “It makes great transistors and photodetectors, and has the potential for light emission and other novel biosensor devices. By adding the capability to rapidly grab and sense molecules on graphene, we can design an ideal low-power electronics platform for a new type of handheld biosensor.”

Oh agrees that the possibilities are endless.

“Besides graphene, we can utilize a large variety of other two-dimensional materials to build atomically sharp tweezers combined with unusual optical or electronic properties,” said Oh. “It is really exciting to think of atomically sharp tweezers that can be used to trap, sense, and release biomolecules electronically. This could have huge potential for point-of-care diagnostics, which is our ultimate goal for this powerful device.”