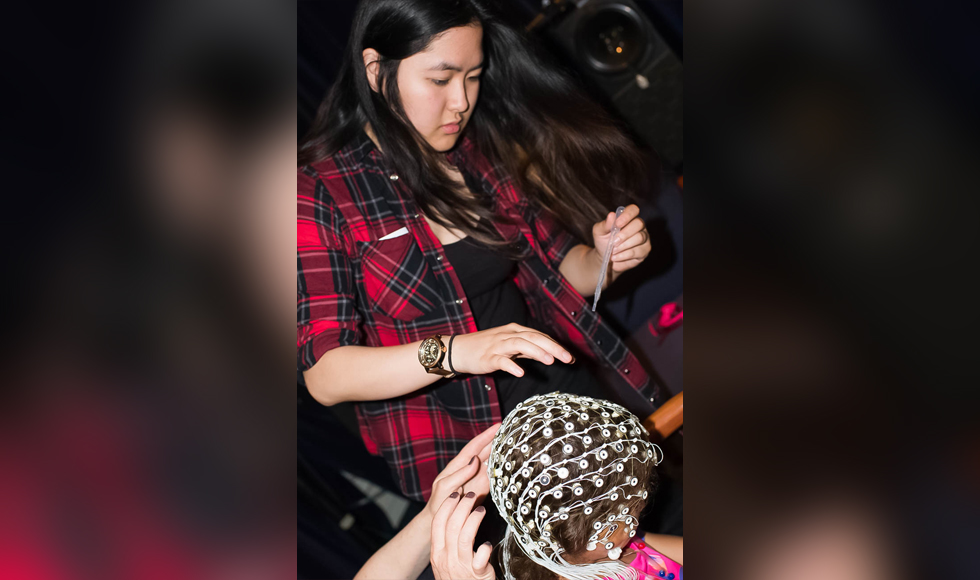 A researcher helping a child participant wearing an EEG cap, a non-invasive approach to measure the brain waves. 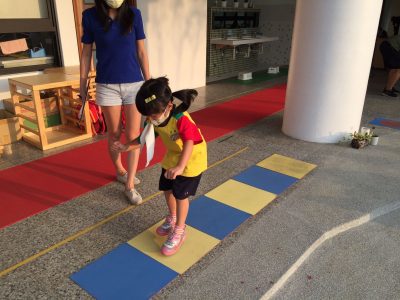 Researchers assessing the motor skills of children (not involved in this study).

Newswise — Neuroscientists at McMaster University have found a link between children who are at risk for developmental coordination disorder (DCD), a common condition that can cause clumsiness, and difficulties with time perception such as interpreting changes in rhythmic beats.

Accurate time perception is crucial for basic skills such as walking and processing speech and music.

“Many developmental disorders, including dyslexia or reading difficulties, autism and attention deficits have been linked to deficits in auditory time perception,” says Laurel Trainor, senior author of the study and founding director of the McMaster Institute for Music and the Mind.

Previous research has shown the brain networks involved in time perception often overlap with the motor control networks required for such activities as catching a ball or tapping along to musical beats. Until now, researchers had not investigated whether children with DCD tended to have auditory timing deficits, despite being at risk for dyslexia and attention deficits.

The study, published online in the journal Child Development, provides new evidence about that connection in children.

Developmental coordination disorder is a common but little-studied condition that affects approximately five to 15 per cent of all children, who can experience a wide range of difficulties with fine and/or gross motor skills. It can have profound and lifelong effects on everyday tasks such as get dressed, writing, and engaging in sports or play, and often interferes with learning, academic performance and socialization.

For this study, researchers recruited more than 60 children aged 6 and 7 years old, who underwent motor skills tests and were assessed either to be at risk for DCD or to be developing typically.

During the first study, each child was asked in a series of trials to pinpoint which of two sounds was shorter in time or had an off-beat rhythm. From this, researchers measured the threshold or smallest time difference at which each child could just barely make the correct judgement.

“We saw that indeed, children at risk for DCD were much less sensitive to time changes compared to typically developing children,” says Andrew Chang, the lead researcher and graduate student in the Department of Psychology, Neuroscience & Behaviour at McMaster.

In the second experiment, researchers used EEG to measure the brain waves of children as they listened to a sequence of sounds that had been tweaked to include occasional timing deviations. Children at risk for DCD had slower brain activity in response to the unexpected timing deviants.

There are no medications to treat DCD, but physiotherapy and occupational therapy can help children improve muscle strength, balance and coordination.

“We know anecdotally that therapists sometimes incorporate regular rhythms into the physical therapy they give to children with DCD, and they have the impression this helps – for example that children can walk better when they walk to a rhythm.” Chang explains.

“Although our current study did not directly investigate any intervention effects, the results suggest that music with salient and regular beats could be used for physiotherapy to help treat children,” he says.

He points to motor rehabilitation featuring auditory cueing with metronomes or musical beats, which helps adult patients who have Parkinson’s disease or are recovering from a stroke. Further research could help to determine whether similar therapies are useful for children with DCD, he says.

Attention editors: A copy of the study can be found at this link: https://srcd.onlinelibrary.wiley.com/doi/epdf/10.1111/cdev.13537

Caption: A researcher helping a child participant wearing an EEG cap, a non-invasive approach to measure the brain waves.

Caption: Researchers assessing the motor skills of children (not involved in this study).