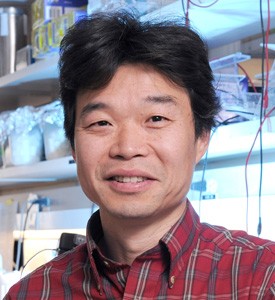 Newswise — DALLAS – August 18, 2014 – Researchers at UT Southwestern Medical Center have found a new way that internal body clocks are regulated by a type of molecule known as long non-coding RNA.

The internal body clocks, called circadian clocks, regulate the daily “rhythms” of many bodily functions, from waking and sleeping to body temperature and hunger. They are largely “tuned” to a 24-hour cycle that is influenced by external cues such as light and temperature.

“Although we know that long non-coding RNAs are abundant in many organisms, what they do in the body, and how they do it, has not been clear so far,” said Dr. Yi Liu, Professor of Physiology. “Our work establishes a role for long non-coding RNAs in ‘tuning’ the circadian clock, but also shows how they control gene expression.”

Determining how circadian clocks work is crucial to understanding several human diseases, including sleep disorders and depression in which the clock malfunctions. The influence of a functional clock is evident in the reduced performance of shift workers and the jet lag felt by long-distance travellers.

Dr. Liu and his team were able to learn more about the circadian rhythms by studying model systems involving the bread mold, Neurospora crassa. The researchers found that the expression of a clock gene named frequency (frq) is controlled by a long non-coding RNA named qrf (frq backwards) − an RNA molecule that is complementary, or antisense, to frq. Unlike normal RNA molecules, qrf does not encode a protein, but it can control whether and how much frq protein is produced.

Specifically, qrf RNA is produced in response to light, and can then interfere with the production of the frq protein. In this way, qrf can “re-set” the circadian clock in a light-dependent way. This regulation works both ways: frq can also block the production of qrf. This mutual inhibition ensures that the frq and qrf RNA molecules are present in opposite “phases” of the clock and allows each RNA to oscillate robustly. Without qrf, normal circadian rhythms are not sustained, indicating that the long non-coding RNA is required for clock functions.

The findings are published online in the journal Nature.

“We anticipate a similar mode of action may operate in other organisms because similar RNAs have been found for clock genes in mice. In addition, such RNAs may also function in other biological processes because of their wide presence in genomes,” said Dr. Liu, who is the Louise W. Kahn Scholar in Biomedical Research.

UT Southwestern investigators are leaders in unraveling the gene networks underlying circadian clocks and have shown that most body organs, such as the pancreas and liver, have their own internal clocks, and that virtually every cell in the human body contains a clock. It now appears that the clocks and clock-related genes – some 20 such genes have been identified – affect virtually all of the cells’ metabolic pathways, from blood sugar regulation to cholesterol production.

Other UT Southwestern researchers involved in the latest findings include Dr. Zhihong Xue, Qiaohong Ye, Dr. Juchen Yang and Dr. Guanghua Xiao. Support for this research included grants from the National Institutes of Health, the Welch Foundation, the Cancer Prevention Research Institute of Texas, and the Biotechnology and Biological Sciences Research Council.

“This study adds to an important body of work that has shown the ubiquity of a circadian clock across species, including humans, and its role in metabolic regulation in cells, organs, and organisms,” said Dr. Michael Sesma, Program Director in the Division of Genetics and Developmental Biology at the of the National Institutes of Health's National Institute of General Medical Sciences, which partially funded the research. “These new results from Dr. Liu and his colleagues also extend beyond understanding the function of an anti-sense RNA in the fine tuning of a cell’s daily rhythm; they provide an example of the means by which anti-sense transcription likely regulates other key molecular and physiological processes in cells and organisms.”