Researchers Release the Most Accurate Map of Antarctica Terrain

4-Sep-2018 8:00 AM EDT, by University of Minnesota College of Science and Engineering
favorite_border

Newswise — MINNEAPOLIS / ST. PAUL (09/04/2018) — A team of researchers led by the University of Minnesota and The Ohio State University have released the most accurate high-resolution terrain map of Antarctica ever created. The map uses high-resolution satellite images to show the continent in stunning detail and will provide new insight on climate change.

The map, called the Reference Elevation Model of Antarctica (REMA), has a resolution of 8 meters (about 26 feet). This means that researchers now know the height of every mountain and all the ice in all of Antarctica within a few feet. In the past, the most accurate topographical map was within about 1 kilometer or about a half mile in elevation. The new map covers about 14 million square kilometers (5.4 million square miles), which is about 50 percent larger than the lower 48 states of the U.S.

“Considering that Antarctica is the highest, driest, and one of the most remote places on Earth, we now have an incredible topographic model to measure against in the future,” said Paul Morin, a University of Minnesota earth sciences researcher and the director of the Polar Geospatial Center.

“Up until now, we’ve had a better map of Mars than we’ve had of Antarctica,” said Ian Howat, professor of earth sciences and director of the Byrd Polar and Climate Research Center at The Ohio State University. “Now it is the best-mapped continent on Earth.”

About 99 percent of Antarctica is covered in ice. This new map provides unprecedented detail that will help scientists measure the impact of climate change over time.

“Now we’ll be able to see changes in melting and deposition of ice better than ever before,” Morin said. “That will help us understand the impact of climate change and sea level rise. We’ll be able to see it right before our eyes.”

The map also is precise and accurate enough that it will allow scientific teams to plan trips over the treacherous Antarctic terrain.

The project began with images taken from a constellation of polar-orbiting satellites about 400-700 kilometers in space. These satellites have been collecting imagery for more than six years to get collect enough imagery for this project.

The Ohio State University researchers developed the software to process the images and University of Minnesota researchers put the maps together over the last five years with computer processing help from the University of Illinois Urbana-Champaign that provided the Blue Waters supercomputer, one of the largest academic supercomputers in the world. The map processed millions of images to create the high-resolution topographic map.

“This is just the first step. We never dreamed we’d be able to process this volume of data with such accuracy. Now, we’ll now be able to repeat this process one and a half times every year so we can see the change over time,” Morin said.

“For us, this is magic right now. We’ll be able to answer some very important scientific questions with this data. This was high-risk, high-reward science that paid off,” Morin added.

Support for REMA was provided by the U.S. National Geospatial-Intelligence Agency and the National Science Foundation. 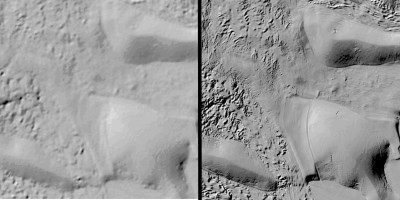 Caption: This image shows the dramatically improved detail between prior available surface imaging (left) and the Reference Elevation Model of Antarctica (right). 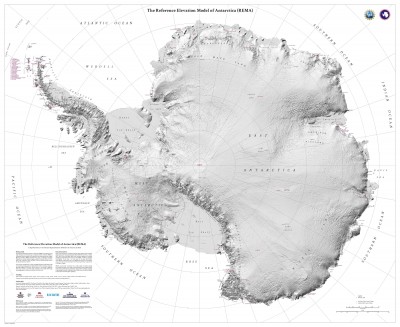 Caption: The Reference Elevation Model of Antarctica shows the continent in stunning detail.

Caption: This image shows a glacier south of Dry Valley.