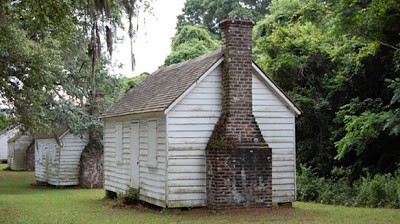 These slave quarters from the Magnolia Plantation in South Carolina are the same type found on the former Hume Plantation.

Newswise — When Sharon Moses and a group of Northern Arizona University students conduct an historical archaeology field school later this month they will be looking for relics buried beneath former slave quarters to gain additional insights on religious practices among different ethnicities and cultures.

Moses, an assistant professor of anthropology and archaeology, is investigating the site of the Hume Plantation’s slave quarters on South Carolina’s Cat Island, specifically looking for items related to rituals and spirituality. “I’m investigating ritual practices where slaves placed ritual magic deposits beneath their cabin floors to protect themselves from their European masters and for curative purposes,” Moses said.

Some slaves participated in Hoodoo practices interspersed with Christian beliefs that they had been exposed to while still in Africa. Hoodoo magic, with its Native American and European influences, involves the use of spells and homemade charms.

The Hume Plantation is an artifact rich site with pre-historic and historic-period deposits from Native Americans, Europeans and Africans.

Early in the plantation’s history Native Americans were used as slaves and later mixed with Africans, whose descendants are referred to as black Indians. In the late 1600s, slaves were brought in from the Congo and the Jamaican Islands where British Aristocracy operated sugar cane plantations and mining ventures. By the late 1700s, the Hume Plantation owners sought slaves from Africa’s Gold Coast because they were knowledgeable about rice harvesting, the plantation’s primary crop.

Each slave group brought unique belief systems and material culture including pottery and personal adornments to the plantation. Moses’ research evaluates the blending of slave cultures and effects on ideas of protection and religious beliefs.

The site of the former plantation is on an island that is now part of a wildlife refuge, leaving the artifacts relatively undisturbed.

Along with the artifacts themselves, Moses is researching their frequency on the property and their locations. “I’m looking at how they are distributed throughout the slave quarter. There is a hierarchy among the slaves themselves depending on how close they lived to the mansion, which is a typical layout pattern found among many plantations,” Moses said.

In addition to ritual deposits in the former slave quarter, Moses has unearthed contraband including handmade weapons, graphite pencils and slate used to teach reading and writing, an illegal activity among slaves because plantation owners feared rebellion.

Moses began research at the Hume Plantation in 2012 with permission from the Tom Yawkey Wildlife Center and the South Carolina Department of Natural Resources. She has worked closely with slave descendants, providing insights on their ancestors. Moses also consulted with law enforcement as a forensic archaeologist in cases involving Hoodoo, which is still practiced by some people in the region.

Moses’ research has filled historical gaps for the south, beginning with trading between the first European Colonists and Native Americans, followed by enslavement of natives and African immigrants through emancipation. “I have this unbroken chain of historical events and interactions between different ethnic groups from the 17th century all the way up through post civil war,” Moses said. “What is coming up out of the ground is rounding up the other side of the story that did not get into the written chronicle.”

During the upcoming field school, students will learn the basics of excavating an archaeological site from measurements, documenting the geology and cataloging the artifacts. Moses plans to publish her findings as more is discovered about slave ritual life at the site.

The slots for this year’s field school are full but Moses hopes to offer the historical archaeology field school during future school years.