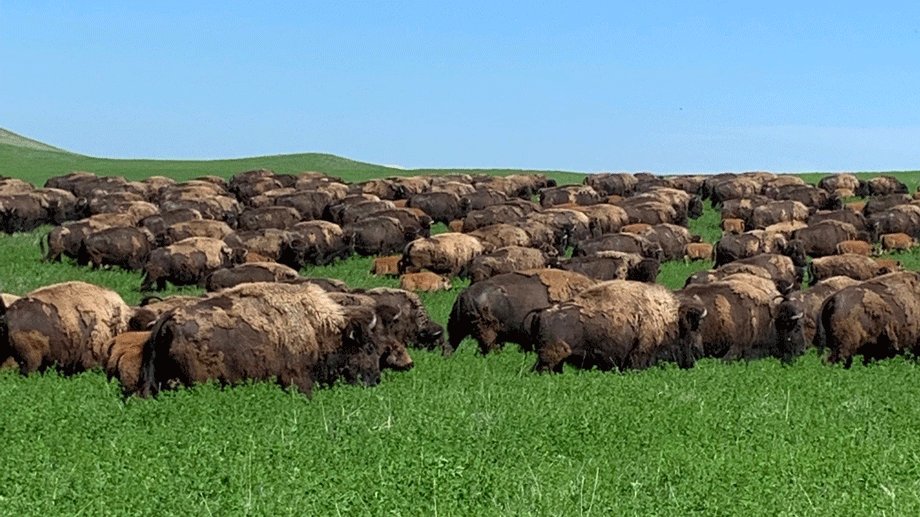 These buffalo are being moved to a new paddock on the 777 Bison Ranch near Hermosa, South Dakota, where owner Mimi Hillenbrand uses rotational grazing, which she refers to as planned grazing because she is “planning for plant recovery” as part of a holistic management plan. She has been using this approach for 30 years to improve the forage diversity and soil quality. 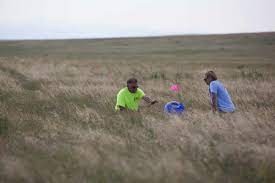 Senior ecologist Steven Apfelbaum, left, of Applied Ecological Services, and Mimi Hillenbrand, owner of the 777 Bison Ranch, inspect the diversity of plant species determine pasture health. Her 26,000-acre ranch near Hermosa, South Dakota, is divided into 35 paddocks that are grazed at a stocking rate of 10 animals per acre.

Newswise — Moving livestock through different pastures or paddocks during the grazing season can help minimize overgrazing and more fully utilize forage. However, the number of ranchers adopting rotational grazing has stagnated despite U.S. Department of Agriculture conservation program incentives.

A recent survey of livestock producers in South Dakota and North Dakota found those who do not use rotational grazing identified water and labor as the major barriers to adopting this conservation practice. The survey is part of a $500,000 U.S. Department of Agriculture National Institute of Food and Agriculture project led by assistant professor Tong Wang of South Dakota State University’s Ness School of Management and Economics.

Although those who use rotational grazing perceived all barriers as less challenging than those who had not adopted the conservation practice, even the adopters chose supplying water to multiple paddocks as their greatest challenge, Wang explained. Providing water to each paddock can mean anything from hauling water to installing water lines.

Allowing livestock to graze the entire season in one pasture, known as continuous grazing, may result in the animals eating only the most desirable grasses, while leaving others untouched. “This is not only an inefficient use of the vegetation, but can lead to the depletion of the best forage plants, invasion by weeds and expansion of bare ground,” Wang said.

The USDA project, which began in 2017, also involves faculty from Texas A&M University and Michigan State University. The researchers sent surveys to ranchers who have at least 100 head of livestock on grazing land.

In analyzing the data from North Dakota and South Dakota respondents, Wang found more than half of those who are using rotational grazing have been doing so for decades. “The practice has proven beneficial in terms of improving soil and water quality as well as profitability, so the adopters will have good stories to tell.”

For more than 30 years, Mimi Hillenbrand, owner of 777 Bison Ranch near Hermosa, has used rotational grazing, which she prefers to call planned grazing because it is “planning for plant recovery” as part of a holistic management plan. “By managing our grass, we are bringing back plant and wildlife species, building top soil and improving water infiltration,” she said. “The animals are utilizing the pastures more uniformly and we are getting more pounds of grazing per acre.”

USDA conservation programs, such as the Conservation Reserve Program, CRP, Grasslands created through the 2014 Farm Bill, encourage producers to switch to rotational grazing through cost sharing and low-interest loans. “This helps pay for water and fencing,” Wang said. Through the rancher survey, the researchers are identifying other factors influencing adoption decisions.

Specific aspects of the ranching operation can impact the producer’s perceived challenges on rotational grazing. For instance, those who get a majority of their income from raising cattle will be more interested in using techniques, such as rotational grazing, to increase their revenue, Wang said. “If the focus is on crops, they may be less likely to consider rotational grazing.”

Land ownership also plays a very important role, she pointed out. “If you don’t own the land, the landlord may not want to change the landscape. If you invest a lot in the land and then it’s not yours to rent anymore, that creates uncertainty.”

Overall, Wang found survey respondents “who had better quality soil, owned more land and had a greater portion of grazing land (in their operations) saw the barriers as less challenging.”

Wang proposes a new approach to improving adoption rates. “We could first identify regions in which cattle producers possess these attributes,” she said. Those who have already adopted rotational grazing can serve as role models for other ranchers in the area.

Local Extension offices and USDA Natural Resources Conservation Services staff “can help us identify producers whose ranches could be used as demonstration sites for their neighbors—they can serve as good examples based on their successes.”

Finally, Wang recommends disseminating information on rotational grazing through webinars and workshops. “We want to attract ranchers who are more likely to feel that the changes necessary to adopt rotational grazing are offset by the rewards they will reap—improved forage, stocking rates and profitability.”

Caption: These buffalo are being moved to a new paddock on the 777 Bison Ranch near Hermosa, South Dakota, where owner Mimi Hillenbrand uses rotational grazing, which she refers to as planned grazing because she is “planning for plant recovery” as part of a holistic management plan. She has been using this approach for 30 years to improve the forage diversity and soil quality.