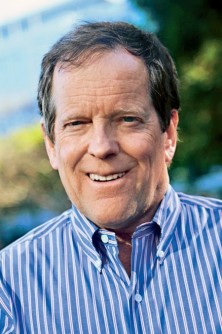 Newswise — The 2018 Saint Louis Climate Summit, hosted by Saint Louis University as a part of its yearlong Bicentennial Celebration, will bring some of the most authoritative minds in climate science and related disciplines to the Midwest for three days of discussion on climate change April 22-24, 2018.

The conference will highlight key issues in climate science, celebrate notable achievements and elucidate a path forward for one of humanity’s most pressing challenges. It was inspired by Pope Francis’ convocation of leading climate scientists at the Vatican in 2014, and the encyclical that emerged from that gathering, Laudato Si’.

Carl Pope will be a keynote speaker at the Chaifetz Arena on Monday, April 23. Pope, who had worked at the Sierra Club for nearly 30 years before stepping down as its Executive Director in 2012, is the coauthor of the 2017 New York Times bestselling-book, Climate of Hope: How Cities, Businesses, and Citizens Can Save the Planet. Coauthored by Michael Bloomberg, former Mayor of New York City, Climate of Hope aims to begin a new conversation on climate change. The book’s message is central to the themes of the Saint Louis Climate Summit. “In a time when national leadership seems bent on denying the facts of climate change and has failed to plan for its likely consequences, smaller-scale efforts will achieve the desired results, by empowering cities, regions, businesses, and citizens to accelerate the progress they are already making on their own,” writes Pope. The full keynote session is in development with additional speakers and presentations planned.

Other distinguished speakers includes Jeffrey Sachs, Ph.D., Columbia University, who the New York Times called “probably the most important economist in the world;” former NOAA Administrator Jane Lubchenco, Ph.D.; Cardinal Peter Turkson, Prefect of the Dicastery for Promoting Integral Human Development; Veerabhadran Ramanathan, Ph.D., of the University of California, San Diego, a recent recipient of the United Nations’ Champions of the Earth Award; and Peter Raven, Ph.D., the Director Emeritus of the Missouri Botanical Garden, who was recognized by Time magazine as a “Hero for the Planet.” The conference is chaired by Jack Fishman, Ph.D., Director of the Center for Environmental Sciences at Saint Louis University, and co-chaired by Peter Raven, Ph.D., who, like Dr. Ramanathan and Cardinal Turkson, provided valuable input to the formulation of Laudato Si’.

The Nine Network of Public Media serves as media partner and will provide event management for the summit. It will host many of the speakers and panels at its facilities in Grand Center, near the campus of Saint Louis University.

About the Saint Louis Climate Summit

The Saint Louis Climate Summit is dedicated to working to fulfill Pope Francis’ call to unite in defense of our common home. Saint Louis University is proudly hosting the summit as part of its bicentennial anniversary celebration and to honor Pope Francis’ call to unite leaders in defense of the health and well-being of the planet. As one of the most respected Jesuit educational institutions in the world, celebrating its 200-year anniversary in 2018 under the Catholic Church’s first-ever Jesuit Pope, there is perhaps no other institution as appropriate to convene a summit aimed at tackling the challenges outlined in Pope Francis’ Encyclical three years ago.

Saint Louis University is a Catholic, Jesuit institution that values academic excellence, life-changing research, compassionate health care, and a strong commitment to faith and service. Founded in 1818, the University fosters the intellectual and character development of nearly 13,000 students on two campuses in St. Louis and Madrid, Spain. Building on a legacy of nearly 200 years, Saint Louis University continues to move forward with an unwavering commitment to serve a higher purpose while seeking the greater good.