15-May-2012 6:00 PM EDT, by Salk Institute for Biological Studies
favorite_border

Newswise — LA JOLLA, CA----It turns out that when we eat may be as important as what we eat. Scientists at the Salk Institute for Biological Studies have found that regular eating times and extending the daily fasting period may override the adverse health effects of a high-fat diet and prevent obesity, diabetes and liver disease in mice. In a paper published May 17 in Cell Metabolism, scientists from Salk's Regulatory Biology Laboratory reported that mice limited to eating during an 8-hour period are healthier than mice that eat freely throughout the day, regardless of the quality and content of their diet. The study sought to determine whether obesity and metabolic diseases result from a high-fat diet or from disruption of metabolic cycles. "It's a dogma that a high-fat diet leads to obesity and that we should eat frequently when we are awake," says Satchidananda Panda, an associate professor in the Regulatory Biology Laboratory and senior author of the paper. "Our findings, however, suggest that regular eating times and fasting for a significant number of hours a day might be beneficial to our health." Panda's team fed two sets of mice, which shared the same genes, gender and age, a diet comprising 60 percent of its calories from fat (like eating potato chips and ice-cream for all your meals). One group of mice could eat whenever they wanted, consuming half their food at night (mice are primarily nocturnal) and nibbling throughout the rest of the day. The other group was restricted to eating for only eight hours every night; in essence, fasting for about 16 hours a day. Two control groups ate a standard diet comprising about 13 percent of calories from fat under similar conditions.

After 100 days, the mice who ate fatty food frequently throughout the day gained weight and developed high cholesterol, high blood glucose, liver damage and diminished motor control, while the mice in the time-restricted feeding group weighed 28 percent less and showed no adverse health effects despite consuming the same amount of calories from the same fatty food. Further, the time-restricted mice outperformed the ad lib eaters and those on a normal diet when given an exercise test. "This was a surprising result," says Megumi Hatori, a postdoctoral researcher in Panda's laboratory and a first author of the study. "For the last 50 years, we have been told to reduce our calories from fat and to eat smaller meals and snacks throughout the day. We found, however, that fasting time is important. By eating in a time-restricted fashion, you can still resist the damaging effects of a high-fat diet, and we did not find any adverse effects of time-restricted eating when eating healthy food." Hatori cautioned that people should not jump to the conclusion that eating lots of unhealthy food is alright as long as we fast. "What we showed is under daily fasting the body can fight unhealthy food to a significant extent," she says. "But there are bound to be limits." Obesity is a major health challenge in many developed countries, reaching global pandemic proportions. According to the Centers for Disease Control and Prevention, more than one-third of American adults and 17 percent of youth are obese. Obesity increases the risk of a number of health conditions including: high blood pressure, high cholesterol and type 2 diabetes. Lifestyle modifications, including eating a healthy diet and daily exercise, are first-line interventions in the fight against obesity. The Salk study suggests another option for preventing obesity by preserving natural feeding rhythms without altering dietary intake. Scientists have long assumed that the cause of diet-induced obesity in mice is nutritional; however, the Salk findings suggest that the spreading of caloric intake through the day may contribute, as well, by perturbing metabolic pathways governed by the circadian clock and nutrient sensors. The Salk study found the body stores fat while eating and starts to burn fat and breakdown cholesterol into beneficial bile acids only after a few hours of fasting. When eating frequently, the body continues to make and store fat, ballooning fat cells and liver cells, which can result in liver damage. Under such conditions the liver also continues to make glucose, which raises blood sugar levels. Time-restricted feeding, on the other hand, reduces production of free fat, glucose and cholesterol and makes better use of them. It cuts down fat storage and turns on fat burning mechanisms when the animals undergo daily fasting, thereby keeping the liver cells healthy and reducing overall body fat. The daily feeding-fasting cycle activates liver enzymes that breakdown cholesterol into bile acids, spurring the metabolism of brown fat - a type of "good fat" in our body that converts extra calories to heat. Thus the body literally burns fat during fasting. The liver also shuts down glucose production for several hours, which helps lower blood glucose. The extra glucose that would have ended up in the blood - high blood sugar is a hallmark of diabetes - is instead used to build molecules that repair damaged cells and make new DNA. This helps prevent chronic inflammation, which has been implicated in the development of a number of diseases, including heart disease, cancer, stroke and Alzheimer's. Under the time-restricted feeding schedule studied by Panda's lab, such low-grade inflammation was also reduced. "Implicit in our findings," says Panda, "is that the control of energy metabolism is a finely-tuned process that involves an intricate network of signaling and genetic pathways, including nutrient sensing mechanisms and the circadian system. Time-restricted feeding acts on these interwoven networks and moves their state toward that of a normal feeding rhythm." Amir Zarrinpar, a co-first author on the paper from the University of California San Diego, said it was encouraging that a simple increase in daily fasting time prevented weight gain and the onset of disease. "Otherwise, this could have been only partly achieved with a number of different pills and with adverse side effects," he says. The multimillion-dollar question is what these findings mean for humans. Public health surveys on nutrition have focused on both the quality and quantity of diet, but they have inherent flaws such as sampling bias, response bias and recall errors that make the results questionable. Thus, says Panda, with the current data it is difficult to connect when we eat, what we eat with how much weight we gain. "The take-home message," says Panda, "is that eating at regular times during the day and overnight fasting may prove to be beneficial, but, we will have to wait for human studies to prove this." The good news, he adds, is that most successful human lifestyle interventions were first tested in mice, so he and his team are hopeful their findings will follow suit. If following a time-restricted eating schedule can prevent weight gain by 10 to 20 percent, it will be a simple and effective lifestyle intervention to contain the obesity epidemic. Other researchers on the study were Christopher Vollmers, Amir Zarrinpar, Luciano DiTacchio, Shubhroz Gill, Mathias Leblanc, Amandine Chaix, Matthew Joens and James A.J. Fitzpatrick, from the Salk Institute; and Eric A. Bushong and Mark H. Ellisman, of the University of California, San Diego. 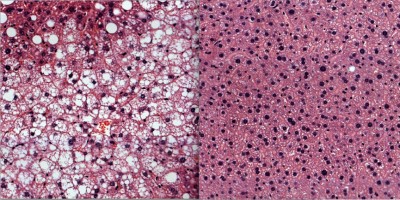 Credit: Images: Courtesy of the Salk Institute for Biological Studies

Caption: These images of liver tissue show the difference in fat accumulation between two groups of mice fed a high-fat diet. A mouse allowed to eat 24 hours a day (left) had much higher levels of liver fat (white) than one restricted to an 8-hour daily feeding window (right). 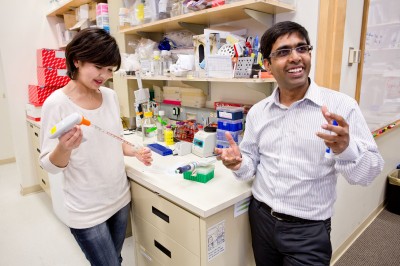