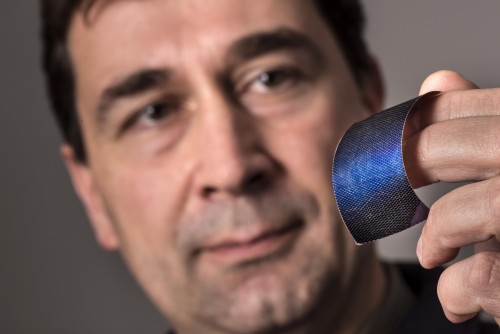 Newswise — ALBUQUERQUE, N.M. — An Albuquerque company founded by a Sandia National Laboratories scientist-turned-entrepreneur has received a license for a “home-grown” technology that could revolutionize the way solar energy is collected and used. The licensing agreement was signed Jan. 23 between mPower Technology Inc. and Sandia for microsystems enabled photovoltaics (MEPV).

“This is an important milestone,” said Murat Okandan, founder and chief executive officer of mPower. “It is an extremely exciting time in the solar industry with the upcoming critical, rapid change in the worldwide energy infrastructure. A lot of things are coming together and we’re excited to be part of it.”

Andy McIlroy, Sandia’s director of Research Strategy and Partnerships and deputy chief technology officer, said at the Jan. 23 signing that the license is special to Sandia because the technology is home grown. “To have it blossom in Albuquerque is something we can be proud of,” he said. “We’d love to see it grow and become part of the country’s solar-energy infrastructure.”

MEPV uses microdesign and microfabrication techniques to make miniature solar cells, also known as “solar glitter.” mPower is commercializing MEPV as Dragon SCALEs, small, lightweight, flexible solar cells that fit into and power devices or sensors of any shape or size, including wearable ones. The high-efficiency cells can be integrated into satellites and drones, biomedical and consumer electronics, and can be folded like paper for easy transport.

Dragon SCALEs also make possible new shapes and materials and faster, cheaper installation of solar energy systems on buildings, Okandan said. The product offers higher voltage, greater reliability and lower energy costs than standard silicon photovoltaic (PV) cells, he said.“The key limitation to silicon is that if you bend and flex it, it will crack and shatter,” he said. “Our technology makes it virtually unbreakable while keeping all the benefits of high efficiency, high reliability silicon PV. It allows us to integrate PV in ways that weren’t possible before, such as in flexible materials, and deploy it faster in lighter-weight, larger-area modules.”

Okandan said standard silicon PV operates with low voltage and high current at the cell and module level, which requires more silver or copper and adds cost. MEPV allows high-voltage and low-current configurations with less metal in the system and meshes well with integrated power electronics. “These are basic benefits that apply fundamentally to large-scale solar deployment,” Okandan said. “And the same technology provides key advantages in satellites, drones and portable power applications.”

Okandan, who helped develop MEPV while working at Sandia 16 years, founded mPower after leaving the labs in May 2015 through the Entrepreneurial Separation to Transfer Technology program, which lets Sandia employees go, with their jobs guaranteed for up to three years, to start or expand technology companies. Another former Sandia employee, Pete Atherton, joined mPower as chief operating officer after retiring last year.

Okandan said the cost of PV systems has dropped 70 percent in the past seven years and the number of installations has increased more than ten-fold. “You can see that the momentum is there to deploy solar faster and more cost effectively,” he said. “Our technology makes that even faster and lower cost by leveraging the massive silicon PV and microelectronics infrastructure and supply chain already in place.”The Sandia license will allow mPower to ramp up commercialization and attract more investment, Okandan said. The company has manufactured product prototypes that customers are evaluating. “We’ve been defining markets and partnerships,” he said. “The license gives us the exclusivity to proceed with further business, product and partnership development.”

Sandia licensing specialist Bob Westervelt said mPower used an exclusive license option on the MEPV technology in its initial product development and decided in October to convert it to a full commercial license that lets the company move to the next stage of its commercialization plan. He emphasized that the mPower license applies to a portion of Sandia’s MEPV intellectual property portfolio associated with silicon solar cells. “There is other MEPV intellectual property useful for other applications and using other materials,” Westervelt said. “That is still available for licensing.”Mary Monson, Sandia’s senior manager of Industry Partnerships, said companies like mPower take the labs’ technology and further develop it so it can be manufactured for widespread use in the energy and defense sectors. “Sandia’s partnerships with industry play an integral role in our mission success,” she said.