Newswise — This was not a typical day at the office for New Mexico State University biology doctoral student Matt Boggie. It was a bitterly cold and windy December morning at the Bernardo Waterfowl Management Area in central New Mexico. He sat quietly with binoculars in an irrigation canal, camouflaged behind vegetation near a mowed-down cornfield.

He waited for sandhill cranes to land in the perfect spot in the field.

A team of about 14 people from NMSU, U.S. Fish and Wildlife Service, New Mexico Department of Game and Fish, Bosque del Apache Wildlife Refuge and others sat patiently in nearby vehicles waiting for the call.

The moment Boggie saw an adequate number of cranes in that perfect spot, he made the call.

In an instant, NMSU wildlife science graduate student Andrew Meyers triggered a detonator that deployed a large explosive-propelled net that captured about 16 cranes. During the next five minutes, several vehicles arrived and people ran toward the cranes. What occurred over the next 30 minutes was a quiet, well-organized, efficient, team-oriented and successful trapping event.

Scott Carleton, a research ecologist with the United States Geological Survey, New Mexico Cooperative Fish and Wildlife Research Unit and affiliate professor in the NMSU Department of Fish, Wildlife and Conservation Ecology, described the process as a well-oiled machine.

The purpose of such trapping events is to affix solar-powered satellite transmitters to cranes’ legs, which are used to track their movements and migration cycle.

Carleton and Dan Collins, migratory bird coordinator with the U.S. Fish and Wildlife Service Southwest Region, are principal investigators of the research project, which is in the second year of a three-year study.

Boggie, who also works out of the USGS, New Mexico Cooperative Fish and Wildlife Research Unit, said the study began solely on the cranes’ wintering grounds in the Middle Rio Grande Valley of New Mexico but has since expanded.

“It has expanded into a border-to-border study, so from regional conservation objectives here on the wintering grounds, to more of continental objectives, across the range of the population,” Boggie said. “It’s related to how the birds are responding to changes in the landscape and what implications that has for managing the population and targeting conservation efforts. At the broader scales, it’s also looking at those drivers of changes in land use and trying to determine what the viability of the Rocky Mountain population is throughout their entire range in North America.”

Boggie’s dissertation research focuses on the ecology of the Rocky Mountain population of greater sandhill cranes that winter in New Mexico.

According to Carleton, 80 percent of the Rocky Mountain population winters in New Mexico at Bosque del Apache National Wildlife Refuge and on a few state lands managed by New Mexico Department of Game and Fish.

Researchers hope to discover how changes in climate and land use in the valley have impacted the species. One major issue is water scarcity. With the loss of wetlands and changes in agricultural patterns in the valley, there is less of a habitat for birds.

The satellite transmitters affixed to the cranes provide 12 GPS fixes per day and last 3 to 5 years.

“What we can do with that data is look at where our birds are stopping over and where they spend their time as they migrate,” Carleton said. “We can actually target those areas to say, ‘If the species is imperiled or becomes imperiled, where would we put conservation on the ground, where would we try to acquire conservation easements or purchase properties to protect those birds and give them places where they can rest and refuel before they continue their migration?’”

The data has already provided researchers with some information. For instance, the birds travel back and forth between several wintering areas in New Mexico, which appears to be driven by the availability of forage resources. Also, the first birds leave much earlier than originally believed, and the last birds leave much later than believed. And, some birds – of a different population – changed their wintering site from New Mexico to Arizona over two years.

There is still much to learn about sandhill cranes and their annual migration cycle.

“The work we’re doing is not just to guide conservation but also to inform state and federal agencies about what the survival rates of these birds are, how they are using the landscape and what we can do to maximize the population size within the boundaries of all the different things that can impact their life,” Carleton said. 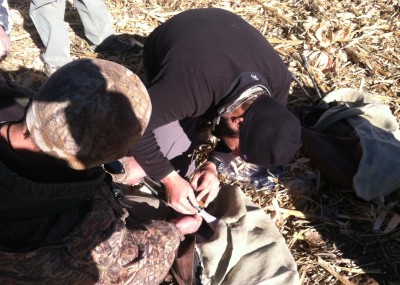 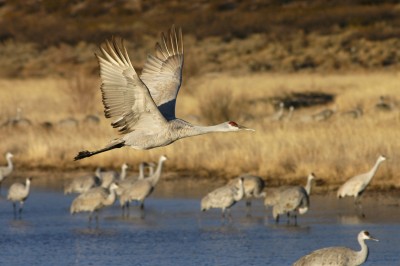 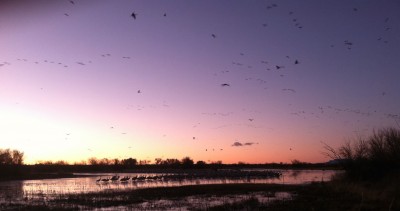