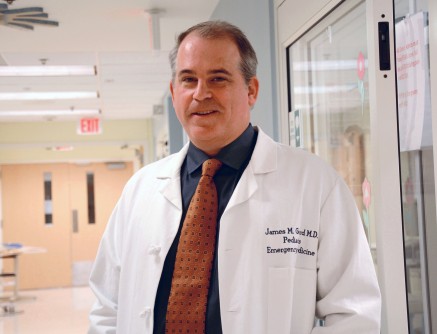 James Gerard, M.D., is a professor of pediatrics at Saint Louis University and the principal investigator of this project.

Newswise — ST. LOUIS – Military physicians will soon pick up joysticks instead of textbooks to learn skills that could save lives of children with serious health threats.

James Gerard, M.D., a professor of pediatrics at Saint Louis University, has received a $541,807 grant from the Department of Defense – Office of Naval Research to work with a Baltimore-based gaming company to develop a video game that will train physicians on pediatric emergency room cases.

“Our goal with this project is to use one of the most popular tools – gaming – to train military physicians so that they feel comfortable and confident in saving children,” said Gerard, a SLUCare pediatrician in the division of emergency medicine at SSM Cardinal Glennon Children’s Medical Center. Gerard is the lead of a nine-member subject matter expert team conceptualizing seven medical scenarios that will be turned into virtual scripts. The team will select cases with life-threatening emergencies including septic and anaphylactic shocks, and respiratory failure, and compel users to think on their feet and perform tests and procedures.

“Physicians who are deployed in military sites may not always have expertise in pediatrics. A game-based education tool will help these physicians build their knowledge,” he said. “In this format, learning is contextual, so instead of reading about septic shock patients, you’re actually taking care of them. It gives you the practical knowledge, which is powerful.”

Each scenario is unique. Once users play through a stage, they will move to the next one. The game will start by displaying some basic information like the age and major symptoms of the patient’s medical condition. The player will then assess the patient by clicking on different body parts, like checking the airway to determine if the patient is breathing properly.

The game scores the user's performance, including actions and their timeliness, which can be used to assess and give feedback to the user.

Gerard said the military embraces the idea of using gaming to train their personnel, since they tend to have a younger work force that connect well with gaming.

“Studies in other fields have shown that if you add video gaming to traditional methods of training, on average, people perform 10 to 20 percent better than those who don't receive video game training,” he said.

One of the potential uses of this game would be to provide quick training to military physicians prior to deploying on humanitarian missions across the world.

Gerard and his team will visit three military sites next year to conduct user testing and initial validation study of how well these games work. A wide ranging set of users – medical students, residents and experienced pediatric emergency room physicians – will play the game, and based on the feedback Gerard receives the team will fix any issues that come up.

“The military also has a unique challenge in that they have situations where physicians with little or no pediatric training are deployed into situations where they have to take care of pediatric patients,” he said. “The military has to find ways to quickly train these physicians to take care of pediatric-specific cases. A game-based format is a good way to do this for many reasons, like standardization of training, fewer instructors, just-in-time capabilities, and easy identification of individual learner needs.”