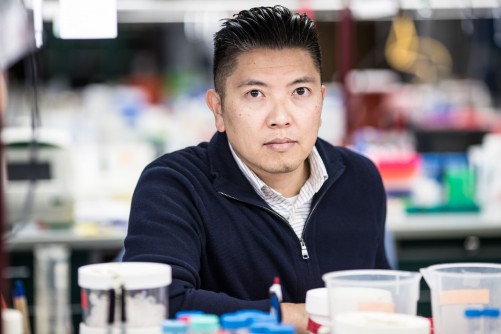 Newswise — La Jolla, Calif., July 10, 2017 – Sanford Burnham Prebys Medical Discovery Institute (SBP) is pleased to announce that the W.M. Keck Foundation has awarded a $1M grant to Duc Dong, Ph.D., to advance research to generate “replacement” organs and cells—such as insulin producing cells for diabetes or dopamine-producing neurons for Parkinson’s disease—directly in the body and without the use of stem cells.

The grant will allow Dong to extend his studies reprogramming dispensable cells such as skin, vasculature and fat cells while they remain in the body, in vivo, without the use of cultures or induced pluripotent stem cell techniques, which could be a safer and more effective method to treat degenerative diseases and injuries.

Dong, an assistant professor in the Human Genetics Program, uses zebrafish—tiny striped fish commonly used for genetic studies-—as a vertebrate model to reprogram cells into unrelated types, completely within the body of these living animals. Dong’s research team already has proof-of-concept data demonstrating in vivo conversion of muscle and skin cells into beta-cell precursors (the cells that mature to produce insulin)—an accomplishment assumed to be impossible by most scientists.

“I’m honored to have received this grant from the Foundation,” says Dong. “The award will support my vision to ultimately make in vivo cell lineage reprogramming a practical therapeutic strategy to replace or even enhance lost, damaged or aging tissues. Our next steps are to develop technologies to convert any cells in the body, at any age, into any cell type of interest, and to uncover the molecular mechanisms driving that process.”

Based in Los Angeles, the W. M. Keck Foundation was established in 1954 by the late W. M. Keck, founder of the Superior Oil Company.  The Foundation’s grant making is focused primarily on pioneering efforts in the areas of medical research, science and engineering and undergraduate education.  The Foundation also maintains a Southern California Grant Program that provides support for the Los Angeles community, with a special emphasis on children and youth. For more information, please visit www.wmkeck.org.

About SBP
Sanford Burnham Prebys Medical Discovery Institute (SBP) is an independent nonprofit medical research organization that conducts world-class, collaborative, biological research and translates its discoveries for the benefit of patients. SBP focuses its research on cancer, immunity, neurodegeneration, metabolic disorders and rare children’s diseases. The Institute invests in talent, technology and partnerships to accelerate the translation of laboratory discoveries that will have the greatest impact on patients. Recognized for its world-class NCI-designated Cancer Center and the Conrad Prebys Center for Chemical Genomics, SBP employs about 1,100 scientists and staff in San Diego (La Jolla), Calif., and Orlando (Lake Nona), Fla. For more information, visit us at SBPdiscovery.org or on Facebook at facebook.com/SBPdiscovery and on Twitter @SBPdiscovery.