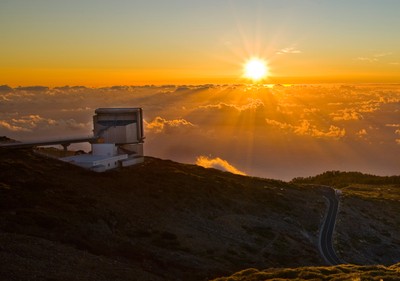 The Telescopio Nazionale Galileo in La Palma, Spain, where the HARPS-N spectrograph was used to rule out alternative explanations. 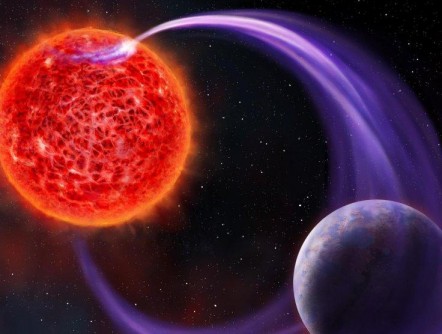 Artistic impression of a red-dwarf star’s magnetic interaction with its exoplanet.

Newswise — A team of scientists using the Low Frequency Array (LOFAR) radio telescope in the Netherlands has observed radio waves that carry the distinct signatures of aurorae, caused by the interaction between a star’s magnetic field and a planet in orbit around it.

Radio emission from a star-planet interaction has been long predicted, but this is the first time astronomers have been able to detect and decipher these signals. The discovery paves the way for a novel and unique way to probe the environment around exoplanets—planets that orbit stars in other solar systems—and to determine their habitability.

Notably, follow-up observations with the HARPS-N telescope in Spain ruled out the alternate possibility that the interacting companion is another star as opposed to an exoplanet.

The work appears in articles in Nature Astronomy and Astrophysical Journal Letters (ApJL).

The breakthrough centered on red dwarfs, which are the most abundant type of star in our Milky Way—but much smaller and cooler than our own Sun. This means for a planet to be habitable, it has to be significantly closer to its star than the Earth is to the Sun.

Red dwarfs also have much stronger magnetic fields than the Sun, which means that a habitable planet around a red dwarf is exposed to intense magnetic activity. This can heat the planet and even erode its atmosphere. The radio emissions associated with this process are one of the only tools available to probe the interaction between such planets and their stars.

“The motion of the planet through a red dwarf’s strong magnetic field acts like an electric engine much in the same way a bicycle dynamo works,” says Harish Vedantham, the lead author of the Nature Astronomy study and a Netherlands Institute for Radio Astronomy (ASTRON) staff scientist. “This generates a huge current that powers aurorae and radio emission on the star.”

Thanks to the Sun’s weak magnetic field and the larger distance to the planets, similar currents are not generated in the solar system. However, the interaction of Jupiter’s moon Io with Jupiter’s magnetic field generates a similarly bright radio emission, even outshining the Sun at sufficiently low frequencies.

“We adapted the knowledge from decades of radio observations of Jupiter to the case of this star,” says Joe Callingham, ASTRON postdoctoral fellow and co-author of the Nature Astronomy paper. “A scaled-up version of Jupiter-Io has long been predicted to exist in star-planet systems, and the emission we observed fits the theory very well.”

To be sure, the astronomers had to rule out an alternate possibility—that the interacting bodies are two stars in a close binary system instead of a star and its exoplanet. The team searched for the signature of a companion star using the HARPS-N instrument (High Accuracy Radial Velocity Planet Searcher) on the Italian Telescopio Nazionale Galileo on La Palma, Spain.

“Interacting binary stars can also emit radio waves,” notes Benjamin Pope, NASA Sagan Fellow at New York University and lead author of the ApJL paper. “Using optical observations to follow up, we searched for evidence of a stellar companion masquerading as an exoplanet in the radio data. We ruled this scenario out very strongly, so we think the most likely possibility is an Earth-sized planet too small to detect with our optical instruments.”

The group is now concentrating on finding similar emission from other stars.

“We now know that nearly every red dwarf hosts terrestrial planets, so there must be other stars showing similar emission,” observes Callingham, also a co-author of the ApJL paper. “We want to know how this impacts our search for another Earth around another star.”

“If we find that most red dwarf planets are blasted by intense stellar winds, this is bad news for their habitability,” Pope, part of NYU’s Department of Physics and Center for Data Science and a co-author of the Nature Astronomy paper.

The group expects this new method of detecting exoplanets will open up a new way of understanding the habitat of exoplanets.

“The long-term aim is to determine what impact the star’s magnetic activity has on an exoplanet’s habitability, and radio emissions are a big piece of that puzzle,” says Vedantham, also a co-author of the ApJL paper. “Our work has shown that this is viable with the new generation of radio telescopes and put us on an exciting path.”

“Coherent radio emission from a quiescent red dwarf indicative of star–planet interaction” is published in Nature Astronomy on February 17, 2020: https://www.nature.com/articles/s41550-020-1011-9

“No Massive Companion to the Coherent Radio-Emitting M Dwarf GJ 1151” is published in the Astrophysical Journal Letters on February 17, 2020:

Caption: Artistic impression of a red-dwarf star’s magnetic interaction with its exoplanet.

Caption: The Telescopio Nazionale Galileo in La Palma, Spain, where the HARPS-N spectrograph was used to rule out alternative explanations.

Founded in 1831, NYU is one of the world’s foremost research universities and is a member of the selective Association of American Universities. NYU has degree-granting university campuses in New York, Abu Dhabi, and Shanghai and has 11 other global academic sites, including London, Paris, Florence, Tel Aviv, Buenos Aires, and Accra. Through its numerous schools and colleges, NYU is a leader in conducting research and providing education in the arts and sciences, engineering, law, medicine, business, dentistry, education, nursing, the cinematic and performing arts, music and studio arts, public administration, social work, and professional studies, among other areas. For more, please visit www.nyu.edu.

The international LOFAR telescope (ILT) consists of a European network of radio antennas, connected by a high-speed fibre optic network spanning seven countries. LOFAR was designed, built and is now operated by ASTRON (Netherlands Institute for Radio Astronomy), with its core located in Exloo in the Netherlands. LOFAR works by combining the signals from more than 100,000 individual antenna dipoles, using powerful computers to process the radio signals as if it formed a ‘dish’ of 1900 kilometres diameter. LOFAR is unparalleled given its sensitivity and ability to image at high resolution (i.e. its ability to make highly detailed images), such that the LOFAR data archive is the largest astronomical data collection in the world and is hosted at SURFsara (The Netherlands), Forschungszentrum Juelich (Germany) and the Poznan Super Computing Center (Poland). LOFAR is a pathfinder of the Square Kilometre Array (SKA), which will be the largest and most sensitive radio telescope in the world. For more, please visit http://www.lofar.org/.

Caption: The Telescopio Nazionale Galileo in La Palma, Spain, where the HARPS-N spectrograph was used to rule out alternative explanations.