Matthew Disney, professor on the Florida campus of The Scripps Research Institute 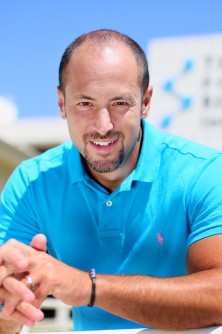 Phil Baran, Darlene Shiley Professor of Chemistry on the California campus of TSRI

Newswise — LA JOLLA, CA – June 3, 2016 – Matthew Disney, professor on the Florida campus of The Scripps Research Institute (TSRI), and Phil Baran, Darlene Shiley Professor of Chemistry on the California campus of TSRI, have been named chemistry finalists for the 2016 Blavatnik National Awards for Young Scientists.

The awards, established by the Blavatnik Family Foundation and administered by the New York Academy of Sciences, recognize outstanding faculty-rank researchers from the nation's leading academic and research institutions.

“The 2016 National Finalists in Chemistry are performing revolutionary research that has the potential to improve lives around the globe,” noted the Blavatnik Family Foundation and New York Academy of Sciences in a statement.

Disney’s research focuses on RNA-based drug discovery. His lab’s goal is to create new tools for the development of therapies based on a patient’s individual genome sequence and the RNA products of those genes. With these tools, Disney and his team are currently targeting rare “orphan” diseases with no known cure and more common disorders that show poor prognoses, such as drug-resistant cancers.

Baran’s lab explores new avenues for the efficient and practical construction of organic molecules, both naturally occurring and man-made, by pursuing longstanding synthetic challenges and by designing methods of broad utility.

Disney and Baran will be honored at an awards ceremony on September 12 at the American Museum of Natural History in New York City.

Once available to the public, this and other press releases are posted on the TSRI website at http://www.scripps.edu/news/newsreleases.html