Findings point to new therapy against prostate and other cancers 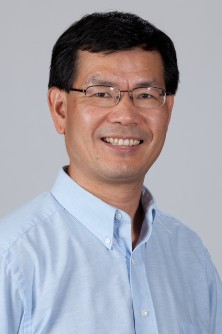 Ben Shen is a professor at the Florida campus of The Scripps Research Institute.

Newswise — JUPITER, FL, June 8, 2015 – Scientists from the Florida campus of The Scripps Research Institute (TSRI) have found that a drug candidate with anticancer potential can be activated by one of the body’s natural responses to cellular stress. Once activated, the agent can kill prostate cancer cells.

“There is no proven drug right now with these activities,” said Ben Shen, vice chair of TSRI’s Department of Chemistry and senior author of the new study, “so this points the way toward a new therapeutic opportunity.”

The study, published this week by the journal Proceedings of the National Academy of Sciences, highlights the potential of the natural compound called leinamycin (LNM) E1 for development as a “prodrug,” a medication converted through a metabolic process in the body to become an active therapy.

Shen’s research has focused on developing natural products into potential therapies. As part of this effort, he heads the Natural Products Initiative at TSRI, a library available for screening with 500 pure natural products, 2,000 fractions, and 7,500 crude extracts, prepared from 4,000 Actinomycetals.

Among these are “antitumor antibiotics” like LNM, which are produced by species of the soil dwelling bacterium Streptomyces and are known to impede cancer cell growth and multiplication. Some antitumor antibiotics are already in use as chemotherapy agents.

In the new study, the Scripps Florida team collaborated with scientists at the University of Wisconsin, Madison to examine whether LNM E1 can be activated by reactive oxygen species, which are naturally occurring molecules containing oxygen that play essential roles in cell signaling. During times of stress, levels of reactive oxygen species can rise significantly and may trigger apoptosis or programmed cell death. It is now widely accepted that many cancer cells are, by their very nature, under high oxidative stress.

The results were promising. “Our study shows unambiguously that when LNM E1 is activated by cellular reactive oxygen species, it causes DNA damage and cell death in cancer cells,” said Ming Ma, co-first author of the study with Sheng-Xiong Huang. The team further demonstrated the therapeutic potential of LNM E1 by showing it to be effective against two prostate cancer cell lines, which are known to exist under high oxidative stress and with increased levels of reactive oxygen species.

The work was supported in part by the National Institutes of Health (grant CA106150).