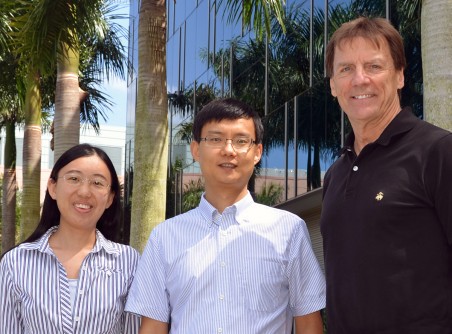 Newswise — JUPITER, FL – April 14, 2016 – While research has identified hundreds of genes required for normal memory formation, genes that suppress memory are of special interest because they offer insights into how the brain prioritizes and manages all of the information, including memories, that it takes in every day. These genes also provide clues for how scientists might develop new treatments for cognitive disorders such as Alzheimer’s disease.

Scientists from the Florida campus of The Scripps Research Institute (TSRI) have identified a unique memory suppressor gene in the brain cells of Drosophila, the common fruit fly, a widely recognized substitute for human memory studies.

The study, which was led by Ron Davis, chair of TSRI’s Department of Neuroscience, was published April 14, 2016, in the journal Neuron.

Davis and his colleagues screened approximately 3,500 Drosophila genes and identified several dozen new memory suppressor genes that the brain has to help filter information and store only important parts. One of these suppressor genes, in particular, caught their attention.

“When we knocked out this gene, the flies had a better memory—a nearly two-fold better memory,” said Davis. “The fact that this gene is active in the same pathway as several cognitive enhancers currently used for the treatment of Alzheimer’s disease suggests it could be a potential new therapeutic target.”

When the scientists disabled this gene, known as DmSLC22A, flies’ memory of smells (the most widely studied form of memory in this model) was enhanced—while overexpression of the gene inhibited that same memory function.

“Memory processes and the genes that make the brain proteins required for memory are evolutionarily conserved between mammals and fruit flies,” said Research Associate Ze Liu, co-first author of the study. “The majority of human cognitive disease-causing genes have the same functional genetic counterparts in flies.”

The gene in question belongs to a family of “plasma membrane transporters,” which produce proteins that move molecules, large and small, across cell walls. In the case of DmSLC22A, the new study indicates that the gene makes a protein involved in moving neurotransmitter molecules from the synaptic space between neurons back into the neurons. When DmSLC22A functions normally, the protein removes the neurotransmitter acetylcholine from the synapse, helping to terminate the synaptic signal. When the protein is missing, more acetylcholine persists in the synapse, making the synaptic signal stronger and more persistent, leading to enhanced memory.

“DmSLC22A serves as a bottleneck in memory formation,” said Research Associate Yunchao Gai, the study’s other co-first author. “Considering the fact that plasma transporters are ideal pharmacological targets, drugs that inhibit this protein may provide a practical way to enhance memory in individuals with memory disorders.”

The next step, Davis added, is to develop a screen for inhibitors of this pathway that, independently or in concert with other treatments, may offer a more effective way to deal with the problems of memory loss due to Alzheimer’s and other neurodegenerative diseases.

“One of the major reasons for working with the fly initially is to identify brain proteins that may be suitable targets for the development of cognitive enhancers in humans,” said Davis. “Otherwise, we would be guessing in the dark as to which of the more than 23,000 human proteins might be appropriate targets.”

In addition to Davis, Gai and Liu, Isaac Cervantes-Sandoval of TSRI was an author of the study, “Drosophila SLC22A Transporter is a Memory Suppressor Gene that Influences Cholinergic Neurotransmission to the Mushroom Bodies.”