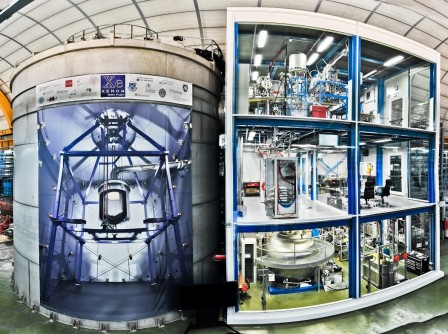 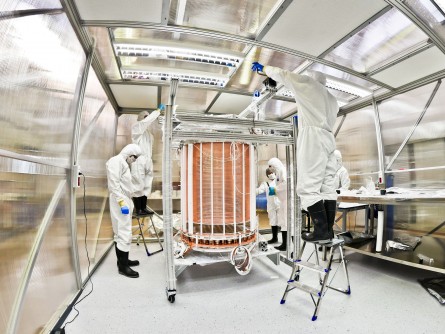 Credit: Courtesy of the XENON Collaboration

The heart of the project: The XENON1T Time Projection Chamber after assembly in a clean room. 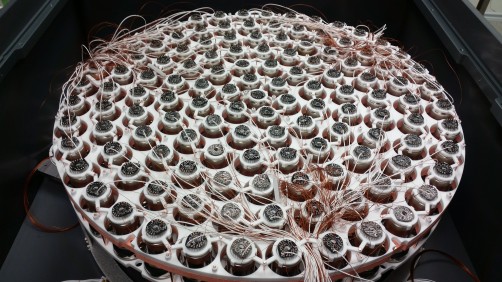 Credit: Courtesy of the XENON Collaboration

The top PhotoMultiplier Tube (PMT) array with all of the electric cables.

Newswise — The petascale Comet supercomputer at the San Diego Supercomputer Center (SDSC) on the UC San Diego campus has emerged as a key resource in what is considered to be the most advanced dark matter research quest to-date, with a group of international researchers recently announcing promising results after only one month of operation with a new detector.

Called XENON1T and located in the National Institute for Nuclear Physics’ Laboratori Nazionali del Gran Sasso (LNGS) in central Italy, the detector is the largest of its kind ever built. The multi-university XENON Collaboration consists of 135 researchers from a wide range of universities and nations, including UC San Diego, in the U.S., Germany, Italy, Switzerland, Portugal, France, the Netherlands, Israel, Sweden and the United Arab Emirates.

Dark matter, believed to be one of the basic constituents of the Universe and an estimated five times more abundant than ordinary matter such as protons and neutrons, does not interact with light or other electromagnetic radiation so it is not readily visible, as its name implies, but can be detected by measuring its gravitational effects. Several astronomical measurements have corroborated the existence of dark matter, leading to a global effort to observe direct dark matter particle interactions with ordinary matter in extremely sensitive detectors, which would confirm its existence. However, these interactions are so weak that they have escaped direct detection up to this point, forcing scientists to design and build detectors that are ever more sensitive.

The XENON1T central detector, called a Liquid Xenon Time Projection Chamber (LXeTPC), is located deep underground, with the Gran Sasso Mountain above the laboratory shielding the detector from cosmic ray interference. Further shielding the detector from numerous but small traces of the Earth’s natural radioactivity, XENON1T has already proved within its first 30 days of operation to have record levels of sensitivity, recording what is essentially pure silence that allows it to better detect the extremely weak signals emitted by dark matter. Researchers say XENON1T is now the world’s best resource for dark matter direct detection via so-called WIMP (weakly interacting massive particles) searches, according to a recent release.

“The best news is that the experiment continues to accumulate excellent data which will allow us to test quite soon the WIMP hypothesis in a region of mass and cross-section with normal atoms as never before,” said Elena Aprile, a professor at Columbia University and spokesperson for the XENON project, in the release. “A new phase in the race to detect dark matter with ultra-low background massive detectors on Earth has just begun with XENON1T.”

“The early performance of XENON1T is significant by any measure,” said Frank Würthwein, SDSC’s Distributed High-Throughput Computing Lead and a UC San Diego physics professor who is involved in searching for dark matter and particle physics phenomena with the CMS detector at the Large Hadron Collider. “These results indicate strong promise of dark matter discovery potential in the years to come.”

Würthwein noted that Comet has been used as a key resource in the XENON Collaboration to assist in the completion of the latest findings, with Kaixuan Ni, an assistant professor in UC San Diego’s Physics Department, serving as the analysis coordinator.

Comet, which went into production in mid-2015 following a National Science Foundation grant currently valued at almost $25 million, also has been among XENON’s two largest contributors of resources within the last year, said Würthwein, and that XENON researchers at the University of Chicago and UC San Diego recently applied for an allocation on Comet via the NSF’s Extreme Science and Engineering Discovery Environment (XSEDE) project, in which the supercomputer is among the most widely used high-performance computing resources across a wide variety of science domains.

Comet is also being used by the Open Science Grid, a national cyberinfrastructure to advance the sharing of resources, software, and knowledge, and was used to help verify the existence of gravitational waves in outer space as theorized by Albert Einstein more than 100 years ago.

Würthwein is the Executive Director of OSG, and both OSG and CMS workflow infrastructures are being used on Comet for ongoing XENON research.