Send Your Name to the Sun Aboard Parker Solar Probe 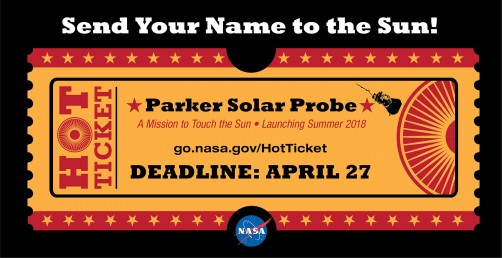 Newswise — NASA’s Parker Solar Probe — designed, built and managed by Johns Hopkins Applied Physics Laboratory (APL) — will launch in summer 2018 and travel to our star on a historic mission to “touch the Sun.” Now you can get on board and be a part of this voyage of extreme exploration.

NASA is giving everyone across the world the opportunity to submit their names for a journey to the Sun. Names will be added to a microchip that will fly aboard Parker Solar Probe as it makes its way from Earth to the Sun — the first mission to ever do so.

Along for the ride will be a revolutionary heat shield, which will protect the spacecraft from soaring temperatures as it plunges into the corona to get the first close-up view of Earth’s star.

Name submissions will be accepted until April 27, 2018. Learn more and add your name to the mission here: http://go.nasa.gov/HotTicket.

Parker Solar Probe’s scientific objectives include tracing the flow of energy and understanding the heating of the solar corona, and exploring what accelerates the solar wind. It will also help scientists understand in greater detail how the Sun affects the solar system and Earth.

“Parker Solar Probe is, quite literally, the fastest, hottest — and, to me, coolest — mission under the Sun,” said project scientist Nicola Fox, of APL. “This incredible spacecraft is going to reveal so much about our star and how it works that we’ve not been able to understand.”

Originally dubbed Solar Probe Plus, the spacecraft was renamed Parker Solar Probe in May 2017, in honor of astrophysicist Eugene Parker. Parker proposed the solar wind’s existence in his now famous 1958 paper published in the Astrophysical Journal. This is the first time NASA has named a spacecraft for a living individual.

“This probe will journey to a region humanity has never explored before,” said Thomas Zurbuchen, the associate administrator for the Science Mission Directorate at NASA Headquarters in Washington. “This mission will answer questions scientists have sought to uncover for more than six decades.”