Shining a Spotlight on the History of Gender Imbalance in Hollywood 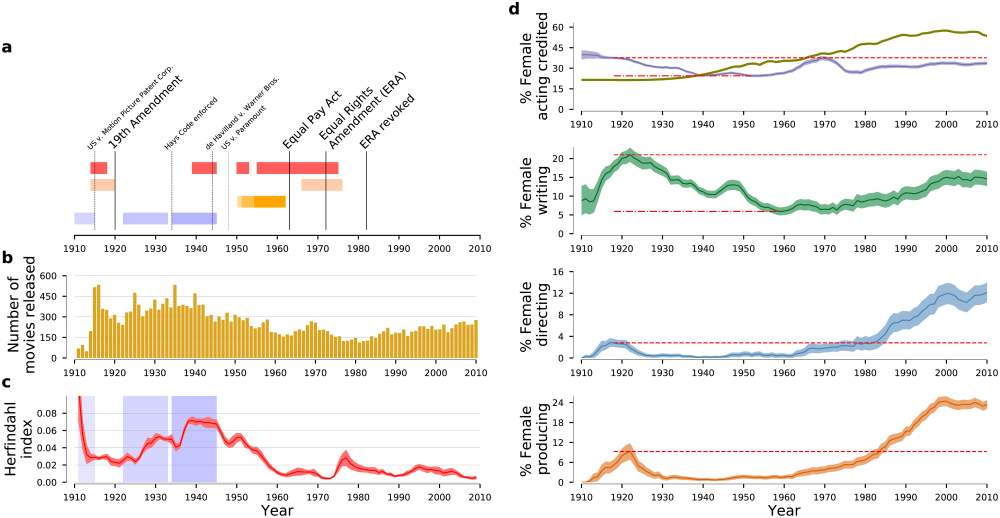 Historical trends of gender imbalance in the U.S. movie industry. (a) Timeline of 20th century events relevant to the evolution of the U.S. movie industry. Red bars identify major wars with U.S. involvement (chronologically, World War I, World War II, Korean war, and Vietnam war). Light peach bars show the peak of the feminism waves in the U.S. Orange shadings indicate the rates of TV adoption in U.S. households (from unsaturated to saturated: <30%, <60%, <90%). [47] Light blue shadings identify, from less to more saturated, MPPC control, [48] consolidation of the Hollywood Studio System, and Studio System’s heyday. [20] The de Havilland vs. Warner Bros’ 1944 decision freed major stars from life long contracts with as single studio. The U.S. vs. Paramount’s 1948 decision unravelled the vertical integration of the U.S. movie industry. These legal defeats enabled greater negotiating power for movie stars and the ability of independent producing companies to have their movies distributed in a more equitable manner. (b) Number of U.S.-produced movies considered in our study released annually. See S1 Fig for breakdown by movie genre. (c) Concentration of the industry’s output by producing company/studio as measured by the Herfindhal-Hirschman index. Larger values indicate that a large fraction of movies are produced by a small number of studios. We observe an increase of the degree of concentration during the period of control of the industry by MPPC. The degree of concentration reaches a minimum in 1922 but then it grows until 1944. These trends are consistent with current understanding of the consolidation and golden age of the Hollywood Studio System. [20, 48] (d) Temporal dependence of the percentage of females according to movie-making function. The olive solid line in the top panel shows female participation in the U.S workforce in order to provide a comparison to the overall economy. Solid lines indicate average values and the color bands show 95% confidence intervals. The red dotted lines show the highest value of female representation attained prior to 1940, and the red dashed lines show the lowest value attained after 1930, if different from zero. For all movie-making functions there is a similar “U-shape” pattern with an early maximum achieved prior to 1922, a minimum reached by the mid-1940s, and an increase after.

Newswise — A new analysis reveals long-term trends in female representation in the U.S. movie industry, including a sharp decline associated with the “Studio System” era that dominated Hollywood from 1922 to 1950. Luís A. Nunes Amaral of Northwestern University, Illinois, and colleagues present these findings in the open-access journal PLOS ONE on April 1, 2020.

While research suggests that gender diversity has significant benefits across industries, women remain underrepresented in many fields, including the U.S. movie industry. However, the movie industry is unlikely to be affected by mechanisms—such as lack of interest or differences in innate ability—that are sometimes hypothesized to explain gender imbalance in other fields.

To better understand gender imbalance in Hollywood, Amaral and colleagues used data from the American Film Institute and the Internet Movie Database to analyze female representation among the teams behind more than 26,000 movies produced in the U.S. from 1911 to 2010.

The analysis showed that female representation among actors, directors, and producers declined dramatically with the birth of the Hollywood Studio System in 1922. During this period, which lasted through 1950, just a few major studios controlled all facets of the movie-making process.

Further statistical analysis uncovered an association between the lack of female producers during the Studio System era and a decline in female directors, screenwriters, and actors. After legal challenges ended the Studio System, actresses gained bargaining power, enabling some to later become producers and directors. Since then, female representation in Hollywood has slowly increased, but remains low.

While the new findings do not demonstrate causal relationships, they suggest that female producers and directors may help further the careers of other women in the industry. The findings could also shed new light on disparities in other fields, such as computer science, that experienced similar declines in female representation as the fields grew in importance.

The authors add: Our study reveals that even in an activity — acting — where women have greater levels of interest then men and at least equal ability, they are still discriminated against. Our study is also consistent with the hypothesis that when an industry grows in importance and size it can experience a collapse of diversity.

In your coverage please use this URL to provide access to the freely available article in PLOS ONE:  http://journals.plos.org/plosone/article?id=10.1371/journal.pone.0229662