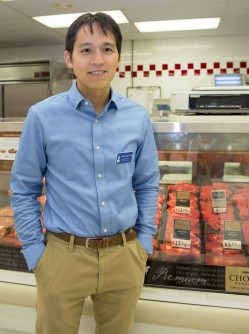 Consumers rate nutrition, health and price as key criteria when buying meat, according to consumer economist Kuo-Liang “Matt” Chang of South Dakota State University. He is part of a research team that did a pilot study to determine how the South Dakota Beef Industry Council can more fully utilize social media to promote beef consumption.

Newswise — In an era when consumers have a wealth of information at their fingertips, where do they turn for recommendations on meat-purchasing?

That’s the question assistant professor Kuo-Liang “Matt” Chang and a team of South Dakota State University researchers sought to answer when trying to determine the best way to use social media to encourage beef consumption. The research was supported by a grant from the South Dakota Beef Industry Council.

Social media platforms provide a wealth of quantitative analytics, including the number of people who visited the site, what they viewed and their demographics, according to Briana Burgers, nutrition assistant and director of online communications for the South Dakota Beef Industry Council.

“We want to know what information our consumers want to see from us,” said Burgers. “This study gives us that qualitative data we need.” Recipes, nutritional informationBased on an online survey filled out by 126 South Dakotans, websites are their No. 1 source of nutrition information and recipes, followed by family and friends, according to Chang. Most respondents were in the 24 to 45 age range. The third-most popular place the respondents find recipes is magazines, followed by social media, the consumer economist explained. However, for nutrition information, social media takes a back seat to health professionals, magazines and television—in that order.

In looking at consumers’ nutritional knowledge, Chang found that more than half the respondents identified beef as containing more iron than other meats, but only 25 percent knew that a chicken thigh has more fat than a steak.

Shopping decisionsNearly 45 percent of respondents had shopped groceries based on information posted on the social media, according to Chang. Though only 27 percent shopped for meat on-line, about 77 percent said they are willing to try new products based on their friends’ suggestions on social media.

More than 80 percent of the respondents used Facebook, while just over 50 percent visited Pinterest, with Twitter coming in third, Chang explained, noting that the beef council maintains a presence on all three. “This suggests that beef council can take increasing advantage of the great marketing opportunities on these platforms.” In addition, Burgers said she also writes a blog on which she tries to connect with millennials and provide easy, convenient and nutritious recipes with how-to photos.

Consumers viewed nutrition and health as top priorities when purchasing both beef and poultry, but when considering price, 55 percent felt it was important when purchasing beef and 58 percent when buying chicken. This difference, though, is not statistically significant, Chang pointed out.

Eating habits, choicesApproximately 37 percent of the respondents buy their beef at a chain store, such as Hy-Vee or Walmart, while 33 percent purchase a half or quarter of beef from a friend or family member, according to Chang. When faced with higher beef prices, South Dakota consumers purchase less meat in general, rather than selecting less expensive alternatives, such as chicken, explained Chang. However, Midwesterners consume 10 percent more beef than the rest of nation.

“One type of meat does not necessarily compete with the other,” said Chang. Consumers purchase a variety of meats which complement, rather than substitute for, one another. To complete the study, Chang will interview 25 respondents to find out how the beef council can draw visitors to its website and to tailor its social media messages to their needs.

About South Dakota State UniversityFounded in 1881, South Dakota State University is the state’s Morrill Act land-grant institution as well as its largest, most comprehensive school of higher education. SDSU confers degrees from eight different colleges representing more than 175 majors, minors and specializations. The institution also offers 29 master’s degree programs, 15 Ph.D. and two professional programs.The work of the university is carried out on a residential campus in Brookings, at sites in Sioux Falls, Pierre and Rapid City, and through Cooperative Extension offices and Agricultural Experiment Station research sites across the state.