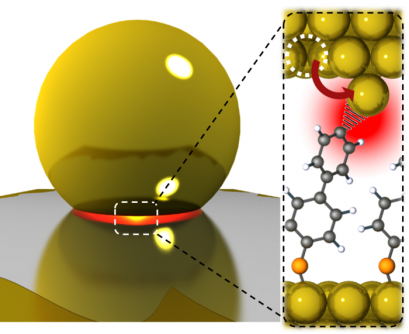 Newswise — By trapping light into tiny gaps only a few atoms wide, a team from the NanoPhotonics Centre has magnified optical forces a thousand-fold, strong enough to force atoms into positions that drive chemical reactions more efficiently.

Weak tractor beams are used to make optical tweezers that can probe biological processes with beams of tightly-focussed light that trap transparent micro-objects of glass or polymer. But to use light to pluck single atoms from solids requires much stronger forces. Now a team from the NanoPhotonics Centre in the Cavendish Laboratory has shown a way to build tiny crevices that magnify the optical forces of visible light. They use these to pull single gold atoms from a crystal, approach them close to a molecular bond, and watch the effects directly on their flopping and vibration. Published in Science Advances , they show new ways to make light act powerfully, and suggest new approaches for driving chemical transformations.

Watching one bond at a time in their experiments avoids averaging over a crowd of different effects. “Single metal atoms are the anvil where catalysis forges new chemical bonds” promises Prof Jeremy Baumberg, “and we can start to watch this process happening and control it”. Catalysis is instrumental for all manmade chemicals and polymers.

“It’s like watching the beautiful dance of an atom and a molecule in real time” notes Hu.