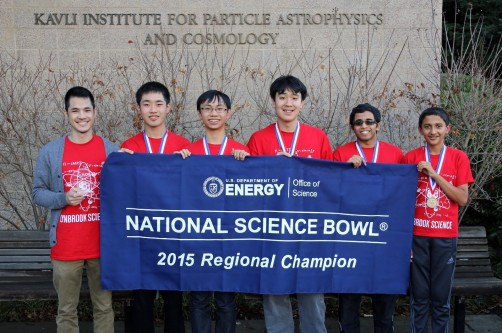 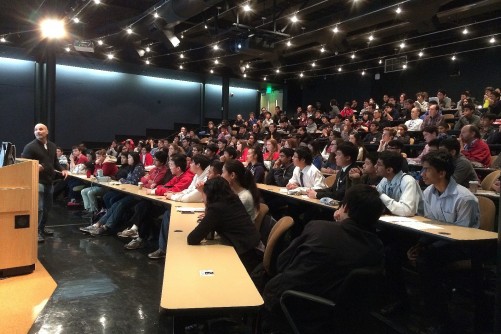 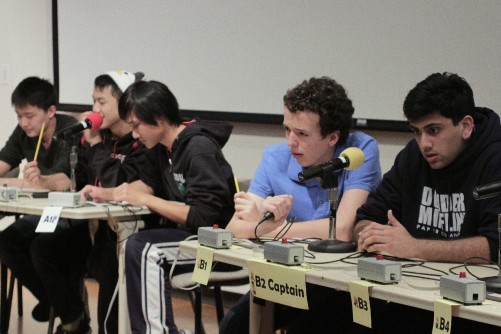 The Science Bowl is a fast-paced competition in which students must think quickly to answer questions covering biology, chemistry, Earth science, physics, energy and math.

After an intense day of science questions and fierce competition, the team from San Jose's Lynbrook High School came out victorious, clinching the regional championship and earning a trip to Washington, D.C., for a chance at the national title.

The DOE created the National Science Bowl in 1991 to encourage students to excel in the STEM disciplines – science, technology, engineering and mathematics – and to pursue careers in these fields.

“Out of 1,000 high school students, only 25 end up working in a STEM job,” said DOE’s SLAC site office team lead Thomas Rizzi in his opening speech, addressing this year’s teams and their coaches. “That’s not enough to cover the increasing demand for specialists with a STEM education.”

Not that the participating science enthusiasts needed additional motivation for the fast-paced competition ahead. The students come prepared to quickly answer multiple-choice and short-answer questions covering biology, chemistry, Earth science, physics, energy and math. Teams have to buzz in to answer a toss-up question. If answered correctly, they get four points and a bonus question that is worth 10 additional points.

The tournament started in the morning in round-robin fashion, with four groups of five teams. Each team had four players and one substitute. The winners and runners-up of each group qualified for the elimination rounds in the afternoon.

Round 10 saw the last two teams standing: Lynbrook and Harker, also from San Jose. Each had placed first in their respective groups, but Harker edged out Lynbrook when they met in the seventh round of the tournament.

Undefeated, Harker was the top-seeded team in the final matchup and could have taken the championship with a win. However, Lynbrook forced a decisive 11th round in which they outplayed Harker 118 to 60 points to become the 2015 SLAC Regional DOE Science Bowl champion.

During the award ceremony, SLAC Director Chi-Chang Kao congratulated all participating teams on their impressive performance. “It’s very good to see that so many of you are interested in science,” he said. “Science and technology are truly important because they have a great impact on how society changes.”

Kao also thanked the almost 50 volunteers that took part in the event as science and rule judges, time and score keepers, moderators and more, making sure the competition proceeded smoothly and was fun for everyone.

Lynbrook’s team members, who for the most part have been competing in the Science Bowl for several years, looked happy as they proudly raised the championship banner. Asked how they will celebrate their triumph, a few students responded that they may dye their hair red – the team’s color. We will see if they follow through with their plan when they compete at the national championship from April 30 to May 4. 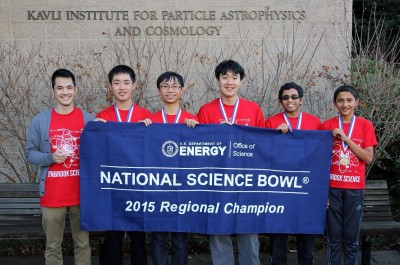 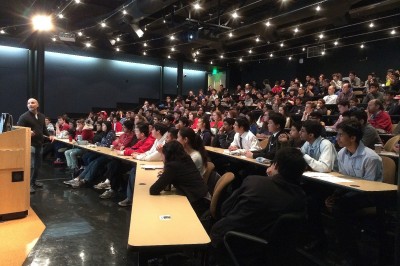 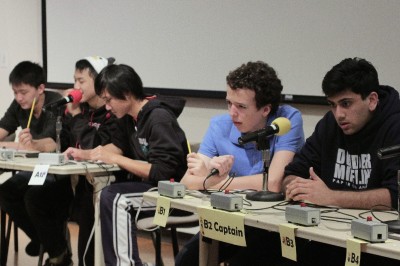 Caption: The Science Bowl is a fast-paced competition in which students must think quickly to answer questions covering biology, chemistry, Earth science, physics, energy and math.