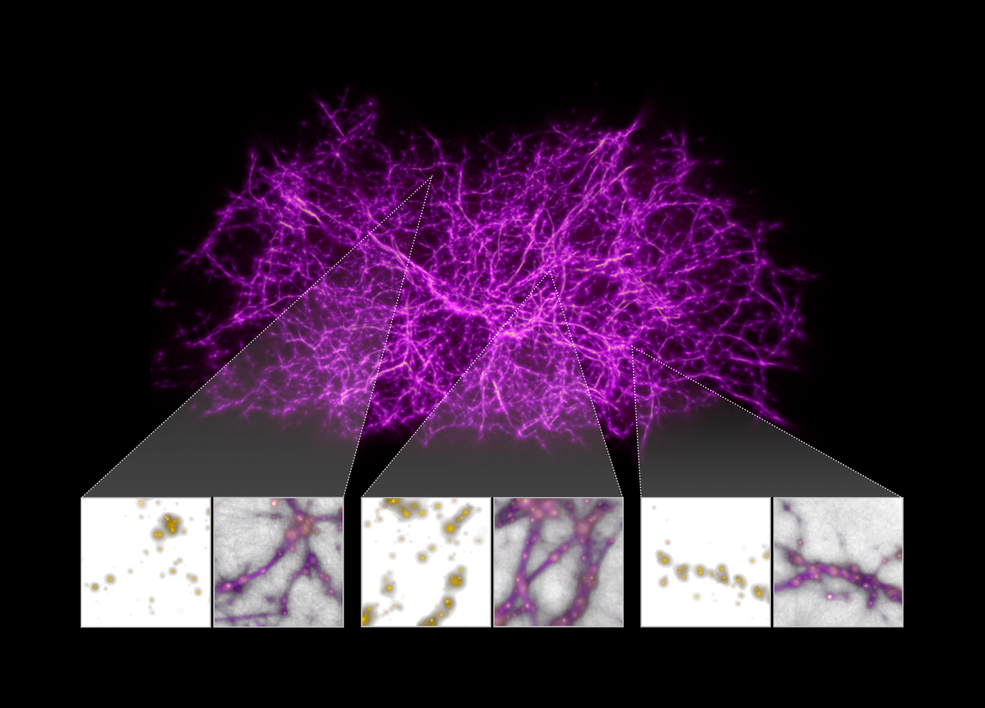 TRACING THE LOCATION OF THE COSMIC WEB USING SLIME MOLD SIMULATIONS. Astronomers have gotten creative in trying to trace the elusive cosmic web, the large-scale backbone of the cosmos. Researchers turned to slime mold, a single-cell organism found on Earth, to help them build a map of the filaments in the local universe (within 500 million light-years from Earth) and find the gas within them. The researchers designed a computer algorithm inspired by the organism's behavior and applied it to data containing the positions of 37,000 galaxies ("food" for the slime mold) mapped by the Sloan Digital Sky Survey. The algorithm produced a three-dimensional map of the underlying cosmic web's intricate filamentary network, the purple structure in the image. The three sets of inset boxes show some of those individual galaxies that were "fed" to the slime mold and the filamentary structure connecting them. The galaxies are represented by the yellow dots in three of the inset images. Next to each galaxy snapshot is an image of the galaxies with the cosmic web's connecting strands (purple) superimposed on them. The cosmic web consists primarily of a mysterious substance known as dark matter and is also laced with low-density gas. Dark matter cannot be seen, but it makes up the bulk of the universe's material. The web provides the cosmic scaffolding upon which galaxies are built, and the gas within the web provides the fuel out of which galaxies form new stars. The research team noted a striking similarity between how the slime mold builds complex filaments to capture new food, and how gravity, in shaping the universe, constructs the cosmic web strands between galaxies and galaxy clusters. Then, after using their algorithm to find the cosmic web filaments, the astronomers used archival observations from the Hubble Space Telescope to detect and study the gas permeating the web.

Newswise — The behavior of one of nature's humblest creatures is helping astronomers probe the largest structures in the universe.

The single-cell organism, known as slime mold (Physarum polycephalum), builds complex filamentary networks in search of food, finding near-optimal pathways to connect different locations. In shaping the universe, gravity builds a vast cobweb structure of filaments tying galaxies and clusters of galaxies together along faint bridges hundreds of millions of light-years long. There is an uncanny resemblance between the two networks: one crafted by biological evolution, and the other by the primordial force of gravity.

The cosmic web is the large-scale backbone of the cosmos, consisting primarily of the mysterious substance known as dark matter and laced with gas, upon which galaxies are built. Dark matter cannot be seen, but it makes up the bulk of the universe's material. The existence of a web-like structure to the universe was first hinted at in the 1985 Redshift Survey conducted at the Harvard-Smithsonian Center for Astrophysics. Since those studies, the grand scale of this filamentary structure has grown in subsequent sky surveys. The filaments form the boundaries between large voids in the universe.

But astronomers have had a difficult time finding these elusive strands, because the gas is so dim it is hard to detect. Now a team of researchers has turned to slime mold to help them build a map of the filaments in the local universe (within 500 million light-years from Earth) and find the gas within them.

The researchers then applied the slime mold algorithm to data containing the locations of 37,000 galaxies mapped by the Sloan Digital Sky Survey at distances corresponding to 300 million light-years. The algorithm produced a three-dimensional map of the underlying cosmic web structure.

They then analyzed the ultraviolet light from 350 quasars (at much farther distances of billions of light-years) catalogued in the Hubble Spectroscopic Legacy Archive, which holds the data from NASA's Hubble Space Telescope's spectrographs. These distant cosmic flashlights are the brilliant black-hole powered cores of active galaxies, whose light shines across space and through the foreground cosmic web. Imprinted on that light was the telltale absorption signature of otherwise undetected hydrogen gas that the team analyzed at specific points along the filaments. These target locations are far from the galaxies, which allowed the research team to link the gas to the universe's large-scale structure.

"It's really fascinating that one of the simplest forms of life actually enables insight into the very largest-scale structures in the universe," said lead researcher Joseph Burchett of the University of California (UC), Santa Cruz. "By using the slime-mold simulation to find the location of the cosmic web filaments, including those far from galaxies, we could then use the Hubble Space Telescope's archival data to detect and determine the density of the cool gas on the very outskirts of those invisible filaments. Scientists have detected signatures of this gas for several decades, and we have proven the theoretical expectation that this gas comprises the cosmic web."

The survey further validates research that denser regions of intergalactic gas is organized into filaments that the team found stretches over 10 million light-years from galaxies. (That distance is more than 100 times the diameter of our Milky Way galaxy.)

The researchers turned to slime mold simulations when they were searching for a way to visualize the theorized connection between the cosmic web structure and the cool gas detected in previous Hubble spectroscopic studies.

Then team member Oskar Elek, a computational media scientist at UC Santa Cruz, discovered online the work of Sage Jenson, a Berlin-based media artist. Among Jenson's works were mesmerizing artistic visualizations showing the growth of a slime mold's tentacle-like network of food-seeking structures. Jenson's art was based on outside scientific research which detailed an algorithm for simulating the growth of slime mold.

The research team noted a striking similarity between how the slime mold builds complex filaments to capture new food, and how gravity, in shaping the universe, constructs the cosmic web strands between galaxies and galaxy clusters.

Based on the simulation, Elek developed a three-dimensional computer model of the buildup of slime mold to estimate the location of the cosmic web's filamentary structure.

Although using a slime-mold-inspired simulation to pinpoint the universe's largest structures may sound bizarre at first, scientists have used computer models of these humble microorganisms, as well as grown them in petri dishes in a lab, to solve such complex problems as finding the most efficient traffic routes in large cities, solving mazes, and pinpointing crowd evacuation routes. "These are hard problems to solve for a human, let alone a computer algorithm," Elek said.

"You can almost see, especially in the map of galaxies in the local universe from the Sloan data, where the filaments should be," Burchett explained. "The slime-mold model fits that intuition impressively. The structure that you know should be there is all of a sudden found by the computer algorithm. There was no other known method that was well suited to this problem for our research."

The researchers say that it is very difficult to design a reliable algorithm for finding the filaments in such a large survey of galaxies. "So it's quite amazing to see that the virtual slime mold gives you a very close approximation in just minutes," Elek explained. "You can literally watch it grow." Just for comparison, growing the organism in a petri dish takes days. Slime mold actually has a very special kind of intelligence for solving this one spatial task. After all, it's critical to its survival.

The team's paper appears in The Astrophysical Journal Letters.