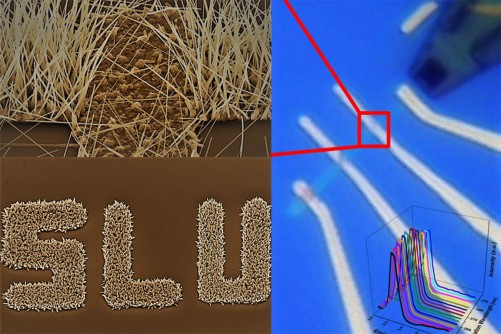 Newswise — ST. LOUIS -- In a study published in Advanced Materials Interfaces and featured on the cover of a special section, Saint Louis University researcher, Irma Kuljanishvili, Ph.D. shares how she has developed a promising technique to produce nanoscale materials using simple processes.

Nanowires are tiny materials that are less than a nanometer in diameter that are important for many existing and emerging technologies. For a sense of perspective, a human hair is 100 micrometers thick, which is 1000 times larger than the nanowires produced in Kuljanishvili’s lab.

Nanomaterials are slowly becoming commercialized as more technologies rely on materials created at such a small scale. Researchers aiming to use these materials must be able to prepare and fabricate nanowires in a controlled and scalable way.

Kuljanishvili, who is an assistant professor in the department of physics at SLU, says the new mask-free fabrication approach that she implemented in her research uses a liquid ink precursor to produce nanoscale materials, and that it allows researchers to predict and optimize the geometric shape of the resulting structure.

“In nanomaterials generally, the big difficulty is the positioning and manipulation of nanoscale objects,” Kuljanishvili said. “Because nanomaterials are so small, we can’t pick them up. We can’t just use tweezers. So there are special methods we use to prepare and study nanomaterials.

“Nanowires will have specific applications because of their unique properties that are governed by their size and also by their internal crystal structure. For example, nanowires are considered one-dimensional, and their properties are unlike the three-dimensional objects which we observe around us everyday.”

Zinc Oxide Nanowires
In the current study, Kuljanishvili’s team synthesized nanowires out of zinc oxide, a mineral that is familiar to many as an ingredient of sunscreen.

Researchers are interested in zinc oxide nanomaterials because they have unique sensing capabilities and hold promise in the development of a wide range of technological applications.  They are used in solar cells, energy harvesting, photovoltaics, supercapacitors, light emitting diodes, ultraviolet sensors and gas sensors.

The material is also biocompatible and biosafe for medical and environmental applications.

A Bottom-up Approach
While many labs use a “top-down” method, akin to sculpting materials out of marble, Kuljanishvili uses a “bottom-up” approach, which is more like growing materials from seeds.

“A bottom-up approach offers flexibility,” Kuljanishvili said. “We start with small and simple and create complex and sometimes even multilayered material architectures.

“A lot of researchers do similar work, trying to develop new nanomaterials or device architectures, but everyone does it in their own way. We try to be simple, to use inexpensive ingredients, to use less laborious processes, and less lengthy fabrication protocols.”

Growing Nanowires
“We have a two-step procedure,” Kuljanishvili said. “First we pattern our desired layout on to the substrate of interest and then we grow the materials. The substrate could be a silicon surface, but we could also use other surfaces, such as graphene, an atomically flat carbon film, for example.

"We perform these tasks in a simple desktop experimental setup, without extremely expensive instruments, but remarkably, we are nevertheless able to do it quite precisely.”

The main feature of Kuljanishvili’s approach is that she avoids the need for a “mask.” In many conventional fabrication methods when nanoscale structures have been created with a pattern on the substrates to form a specific design or architecture, it is done using a templated mask, like an imprint with a process that is similar to developing a photo in a dark room.

“In conventional fabrication, there is always some kind of ‘mask’ involved to create patterns,” Kuljanishvili said. “Then the light of an ultraviolet lamp or an electron beam is used to carve a pattern.

“In our case, we directly draw our patterns on the surface with a so-called ‘pen’. We don’t use any solvent other than water. Our custom inks are usually water-based liquid inks.”

Researchers call the technique direct-write patterning. They use liquid ink precursors to draw a pattern directly on the surface of silicon using an array of sharp little ‘pens’ whose tips are only a few nanometers in size. When the writing is finished, the precursor material forms a pattern on the surface.  After the pattern is drawn, the team places it in a chemical vapor deposition chamber to finish the process.

“Once growth is complete, we examine it, and we see that we have synthesized material on the substrate only at the places where we had created the patterns. We can think of this as a miniaturized, nano-printing method.”

Tailoring Results
The research team also found that they could control the size of the resulting nanowires.

“One other really interesting aspect we discovered is that not only can we place material where we want the nanowires to be grown, but we can also control the geometry, average diameter and length, of the individual nanowire by controlling conditions during growth,” Kuljanishvili said.  “That is quite interesting.  We simply  tune certain parameters when we pattern, and we also adjust growth conditions.

“This means we can tailor the material we grow to a specific need. For example we could think of creating a specific size of a nanowire that will have a bandgap of a certain value. The bandgap is an energy gap between electrons in the valance band, which is a characteristic feature of any semiconductor, and which allows nanoscale transistors to function as electrical switches. By manipulating this band gap we can tailor specific materials to specific technologies.

“For instance, some applications may need nanomaterials which behave as insulators and others may need a semiconductor or a metallic structure, or all-the-above, arranged in more complex architectures. Additionally, rather than having nanowires that are vertically oriented, we may want to create nanostructures that are flat, only a few nanometers thick, and patterned to the desired shapes. The approach which we employ could be very useful for many different needs and applications.”

The SLU researchers have already published similar technology that applies to other semiconductor materials, and they aim to expand this research by developing methodologies for other types of materials.

Each year, Kuljanishvili’s team adds to their tool kit new types of inks that they develop and new materials that they grow. Eventually they hope to mix and match materials that exhibit unique properties because of the way they have been placed together.

“I think this type of research where we constantly move forward with discovering new materials, testing new ways to layer specific materials on top of each other, is very exciting for me and my students, because how we layer them will play a role in their resulting properties.

“It’s like LEGO pieces. You build something unique, then you break them down, rearrange the pieces and build something else, something different. We want to continue adding to our library of new materials, and to diversify our palette of inks for new nanomaterials. Engineered materials is becoming an exciting new field.

“I tell my students that we live in a fast moving new era in science and technology, and in nanotechnology, and materials science where physics and chemistry of the nanoscale systems play a crucial role, an interdisciplinary approach to a problem is very important."

Other researchers on the study include SLU graduate student and Ph.D. candidate, Dheyaa Alameri and Leonidas E. Ocola, a physicist at Argonne National Laboratory’s Center for Nanoscale Materials.

Bottom Line
SLU researchers prepared zinc oxide nanowires using a catalytic Fe liquid ink precursor in the presence of the mineral zinc oxide powder. At a temperature high enough to vaporize the zinc oxide powder, wires nucleate and grow at the surface of the catalysts, resulting in the localized growth of the nanowires only at catalytic sites.