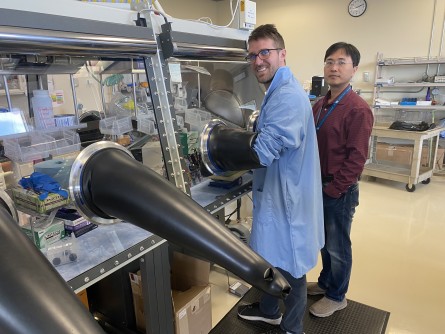 Newswise — Imagine a future when electric vehicles can travel thousands of miles on a single charge, and cargo ships and passenger planes run on batteries instead of fossil fuels.

To make these technological leaps a reality, researchers are working to find an alternative to lithium-ion batteries that, despite their use in everything from smartphones to electric vehicles, have some disadvantages, especially their relatively low energy density compared to gasoline.

One promising alternative, lithium-sulfur batteries, have a high energy density. In other words, the sulfur cathode and the lithium metal anode allow the battery to store more Watt-hours per kilogram than a conventional lithium-ion battery.

The high energy density of lithium-sulfur batteries could lead to lighter, smaller batteries that can last longer on a single charge. They also have the potential to be less expensive and are considered more environmentally friendly than lithium-ion batteries.

However, lithium-sulfur batteries have one big disadvantage: They degrade quickly, so they don’t last as long as other types of batteries, and their performance wanes the more they are recharged.

Recently, Bin Li, a senior scientist in the Energy Storage and Electric Transportation department at Idaho National Laboratory (INL) had a creative solution to this problem. He suggested that an Idaho Falls company, Cogent Energy Systems, apply their technology — carbon nano-onions — to lithium-sulfur batteries as the sulfur host to improve the battery cycling performance.

The collaboration was possible through Idaho National Laboratory’s Technical Assistance Program, which provides U.S.-based small businesses access to INL experts and unique capabilities at no cost.

Carbon nano-onions are tiny carbon structures made of concentric layers, (hence the name “onion”), that possess several useful chemical and physical properties. The problem is that most methods of producing carbon nano-onions are only suitable for low volume production. To be used in lithium-sulfur batteries in commercial applications, large-scale production is needed.

Recently, Cogent tested the HelioStorm Gasifier on a material called carbon black that is produced from the thermal cracking of hydrocarbons.

“We got that carbon-black material and sent it through the gasifier,” said Peter Kong, Cogent’s chief scientist and a retired distinguished scientist from INL. “The high temperatures in the gasifier transformed it into nano-onions — a form of carbon similar to graphite that has concentric rings like an onion. Because of this particular structure, it can be used as a host for sulfur.”

“We have developed a process that can produce in high quantities and drive the production costs down,” Kong continued.

Help from the Technical Assistance Program

Through the Technical Assistance Program, Li was able to design and conduct tests of the nano-onion’s performance in a lithium-sulfur battery.

“We compared the nano-onion powder with a commercial sulfur electrode,” Li said. “This material indicates a better cycling performance and better rate performance.”

In other words, the carbon nano-onions helped the battery charge faster and maintain its performance better after long-term charging/discharging cycles.

In lithium-sulfur batteries, the sulfur is the active material in the cathode. When nano-onions host the sulfur, their concentric layers help improve the battery’s performance. In particular, the nano-onions might inhibit the shuttling effect, a process where polysulfides form from sulfur and migrate to the anode, degrading the battery.

The tests Li performed on Cogent’s carbon nano-onions relied on capabilities not readily available outside of a major research institution like INL. “Because we are a small company, we don’t have resources to do a lot of tests and development,” Kong said. “We needed the assistance of INL to characterize the material’s performance.”

There’s a strong interest at INL in supporting local businesses and municipalities, said Ryan Bills, senior commercialization manager at INL. “The energy storage team had a unique ability to meet Cogent’s needs,” he said. “It was a natural fit. To my knowledge, there aren’t a lot of teams that could make this kind analysis that quickly.”

“In Cogent’s case, we were able to work with a local company and supported the commercialization of a new technology that could tie its origin back to INL,” Bills continued.

The next step for Cogent is to use the data gathered at INL about the performance of the carbon nano-onions to bring the product to market.

Li said he considers the collaboration a win-win because it shows the potential of a promising battery technology. “Lithium-sulfur batteries show high performance and low cost,” he said. “If the hurdles in these battery systems can be resolved, electrifying not just transportation, but other energy storage applications, could become a reality.”

Battelle Energy Alliance manages INL for the U.S. Department of Energy’s Office of Nuclear Energy. INL is the nation’s center for nuclear energy research and development, and also performs research in each of DOE’s strategic goal areas: energy, national security, science and the environment. For more information, visit www.inl.gov. Follow us on social media: Twitter, Facebook, Instagram and LinkedIn.