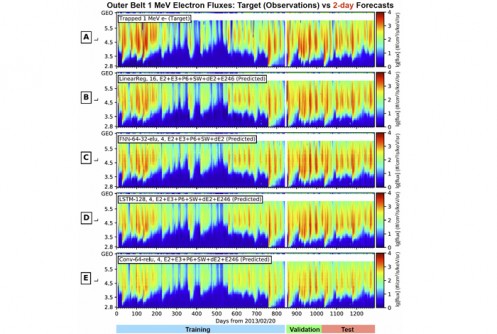 Overview of electron observations (top) and predictions made by PreMevE 2.0. All panels present for the same 1289‐day interval starting from 2013/02/20.

Newswise — LOS ALAMOS, N.M., March 2, 2020—A new machine-learning computer model accurately predicts damaging radiation storms caused by the Van Allen belts two days prior to the storm, the most advanced notice to date, according to a new paper in the journal Space Weather.

“Radiation storms from the Van Allen belts can damage or even knock out satellites orbiting in medium and high altitudes above the Earth, but predicting these storms has always been a challenge,” said Yue Chen, a space scientist at Los Alamos National Laboratory and principal investigator on the project jointly funded by NASA and NOAA. “Given that the Van Allen Probes, which provided important data about space weather, recently de-orbited, we no longer have direct measurements about what’s happening in the outer electron radiation belt. Our new model uses existing data sets to ‘learn’ patterns and predict future storms so satellite operators can take protective measures, including temporarily shutting down part of or even the whole satellite to avoid damage.”

“With the expectation that similar patterns may reveal themselves in the future, our model is capable of making predictions by capturing some critical signatures as a precursor to those future events,” explained Youzuo Lin, a computational scientist at Los Alamos who developed the machine-learning algorithms for the model.

“By testing the model with multiple machine-learning algorithms, this work confirms the predictability of MeV electrons, as well as the robustness of using low-Earth-orbit electron observations to drive predictions,” added Chen. “In addition, the framework set up in this work allows us to easily include more input parameters to predict more energetic electrons in the next step.”

The machine learning framework developed for PreMevE 2.0 can also be applied to many broad applications that use time-related measurements, such as capturing earthquake patterns among large volumes of seismic time-series data, enabling detection of small earthquakes out of the noisy environments.