The ability of spiders to adapt to their local environment and humidity levels by alter the viscosity of their "web glue" may inform the next generation of smart adhesives. 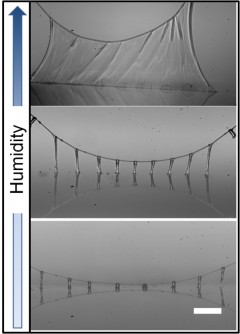 Larinioides cornutus capture threads peeled from a glass substrate, under low, medium, and high humidity conditions. Note the increase in glue extensibility with humidity. At medium humidity, the glue droplets form a suspension bridge structure where adhesion is maximum. The scale is 100µm.

Newswise — WASHINGTON, D.C., October 14, 2015 -- Spiders are among the most diverse species on our planet, with about 45,000 known species living in a variety of habitats and environments. Some 7,500 of those species spin webs to catch their prey. The webs' spiral-like strands of "capture silk" play a key role by retaining prey, freeing spiders to hunt.

The capture silk consists of an axial fiber coated with "glue droplets" at regular intervals. This spider glue is unique, because its adhesion increases in response to humidity, and for some species, the adhesion continues to increase up to 100% relative humidity (RH). That is the exact opposite of how synthetic adhesives, such as those on Band-Aids, act on human skin in response to higher humidity -- as soon as you sweat, they peel right off.

A group of researchers from the University of Akron and Virginia Polytechnic Institute has explored the properties underlying spider glue's humidity-responsive adhesion. They will describe their work and how it might lead to much-sought-after "smart adhesives," with the ability to function even in high-humidity conditions, during The Society of Rheology's 87th Annual Meeting, being held Oct. 11-15, 2015, in Baltimore, Md. Rheology is the branch of physics that deals with the deformation and flow of matter.

To begin their research, the scientists measured the adhesion of capture threads from five diverse species of spider. "The habitats of these species ranged from dry to wet and humid, so we measured the adhesion as a function of humidity and used high-speed imaging to quantify the spreading rate of the spiders' glue droplets," explained Gaurav Amarpuri of Akron.

Amarpuri is a Ph.D. candidate working with a diverse team of materials scientists and biologists, including Professor Ali Dhinojwalka and Professor Todd Blackledge from the University of Akron in Ohio, as well as Professor Brent Opell from Virginia Tech. Their collaboration is part of the new Biomimicry Research Innovation Center (BRIC) in Akron, which bills itself as dedicated to innovation inspired by nature.

Under the microscope, the group was also able to view spider glue peeling and clearly see that its extensibility increases with humidity. They observed glue viscosities that showed "changes of over five orders of magnitude with a shift from 30 percent to 90 percent relative humidity — the equivalent of a solution changing from the consistency of peanut butter to that of olive oil," Amarpuri pointed out.

The viscosity of glue at humidity of maximum adhesion was "very similar, even though that humidity varied from 30 percent to 90 percent among the five species studied," Amarpuri said. "This shows the unique ability of spiders to change or 'tune' their glue viscosity to maximize adhesion and prey capture."

The mechanism behind spiders' ability to adapt to the humidity within their local environment and to change the viscosity of their web glue may help to develop next-generation smart adhesives. "Our study highlights viscosity modulation as a potent tool that various organisms use to derive different functionalities," Amarpuri noted. "Further work to quantify bulk rheological changes within biological materials may result in a new class of smart materials."

The researchers have begun zeroing in on spider glue's proteins and salts. Salts are low molecular weight organic compounds, which are hygroscopic (able to attract and hold water molecules), and although the proteins are relatively similar, the salts vary significantly in ratio and composition by species. "So now we're investigating the role of salts in controlling viscosity and adhesion," Amarpuri added.

Presentation #PO11, "Spiders tune glue viscosity to maximize adhesion," by Gaurav Amarpuri, Candido Diaz, Todd Blackledge, Brent Opell and Ali Dhiojwala will be in a poster session that starts at 6:05 p.m. on Wednesday, October 14 2015 in the Atrium Lobby of the Hyatt Regency Baltimore. ABSTRACT: https://www.rheology.org/SoR15a/ViewPaper?ID=373

The 87th Annual Meeting of The Society of Rheology will be held in Baltimore, Md., on Oct. 11-15, 2015, at the Hyatt Regency Baltimore. It will feature ten thematic sessions and a poster session, which includes the annual student/post-doc poster competition. PRESS REGISTRATION

We will grant free registration to any credentialed journalist or press officer upon request. If you are a reporter and would like to attend, contact Jason Bardi ([email protected], 240-535-4954), who can also help with setting up interviews and obtaining images, sound clips, or background information.

ABOUT THE SOCIETY OF RHEOLOGY

The Society of Rheology is composed of physicists, chemists, biologists, engineers, and mathematicians interested in advancing and applying rheology, which is defined as the science of deformation and flow of matter. The Society holds an annual meeting and publishes the bimonthly Journal of Rheology. For more information, see: http://www.rheology.org

87th Annual Meeting of The Society of Rheology