At the annual Biophysical Society meeting in February, Ken A. Dill, Director of the Laufer Center for Physical and Quantitative Biology and Professor of Physics and Chemistry at Stony Brook University was interviewed by Biophysics Society TV 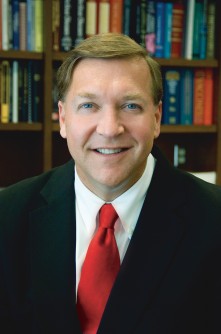 Newswise — STONY BROOK, NY April 9, 2014 – Thanks to a $500,000 donation from the Stony Brook Foundation, Stony Brook University has established the Discovery Fund, a new initiative to support the University’s vital discovery-driven research through philanthropy. The Discovery Fund will attract private philanthropic dollars that will continue to advance basic science research and discovery at Stony Brook University, a counter to the years of funding cuts to scientific research at the Federal level. “The need for private support of discovery-driven research is greater than ever, and the Stony Brook Foundation is honored to advance the University’s mission of innovation and progress through research,” said IMAX CEO and Stony Brook Foundation Chair Richard Gelfond ’76. “The Fund will carry on the University’s legacy of making ground-breaking scientific discoveries that can change the world.” “Despite a solid history of return on investment, and ongoing advocacy for new investment, the only constant in federal funding of basic science research right now is cutbacks, and we can no longer depend solely on government support,” said Stony Brook President Samuel L. Stanley Jr., M.D. “At Stony Brook, philanthropy creates new opportunities and a margin of excellence in all that we do. With the advent of the Stony Brook Discovery Fund, we can continue to support our faculty as they seek to advance discovery through basic science research.” Private dollars raised through the Discovery Fund will support Stony Brook University faculty and students in pursuit of new ideas and answers to today’s most burning questions in the areas of engineering and the physical and life sciences including but not limited to biology and human evolutionary science, geosciences, cognitive neuroscience, nano-science, mathematics, marine and atmospheric sciences, nuclear and computational astrophysics, theoretical physics, and computer and information sciences. Details of the fund's administration are under development. Researchers across the country are rallying to raise awareness about the need for basic science research funding, both public and private. At the annual Biophysical Society meeting in February, Ken A. Dill, Director of the Laufer Center for Physical and Quantitative Biology and Professor of Physics and Chemistry at Stony Brook University was interviewed by Biophysics Society TVduring which he used the example of the iPhone to explain how basic science research pays off for the public and for the economy. “Industrial technology development was very important in going from the iPhone 1 to the iPhone 5, but without basic science discoveries, i.e., the basic computer, solid state electronics, GPS, wireless technology and the internet – all of which were funded with public money – the iPhone would not have been invented at all,” said Dill. “It took 60 years from the basic science to the payoff for smartphones which is now a $150 billion industry. So thanks to federal funding support of basic science, our parents and grandparents made it possible for us to have the iPhone today.” Putting this into the context of diminishing support for basic science research by the Federal Government, Dill continued: “During the 1960s the federal government invested 1.7 percent of the country’s GDP into research and development versus 0.7 percent today. Unfortunately, over the past thirty to fifty years we have not been investing anywhere near what we used to invest in basic science.” “The only cure for cancer, the only solution to climate change, the only way to ensure the long-term survival of our planet and species lies in the promise of basic research,” said Dr. Stanley. “While Federal Funding is the key to and has been the cornerstone for long term discovery and development in the United States, private philanthropy and alternate sources of funding are now also vitally important toward advancing this important mission.” For more information go to Stony Brook University Discovery Fund website.

### Sidebar: Federal Research Dollars and Stony Brook Nobel LaureatesAs a young institution on a mission to achieve greatness, Stony Brook encouraged untethered pursuit of scientific discovery among its faculty. This philosophy attracted scholars like chemist Paul Lauterbur, who had a flash of insight in September 1971 that information from nuclear magnetic resonance signals could be recovered in image form. Enabled by 88 grants from the National Institutes of Health (NIH) over the next twenty years, his work led to the 2003 Nobel Prize for the development of magnetic resonance imaging. C.N. Yang, 1957 Nobel Laureate in Physics, arrived at Stony Brook in 1966. His recruitment told the world that Stony Brook’s nascent campus was serious about supporting scientific discovery. Dr. Yang’s pure intellectual curiosity about the origins of the universe shaped our Physics Department, which today is ranked 13th by phd.org based on National Research Council data and includes the C.N. Yang Institute for Theoretical Physics, and which has a nuclear physics program ranked 4th in the U.S according to US News & World Report. The spirit of these two Nobel Laureates and their pursuit of fundamental scientific inquiry continue to inspire faculty and students alike and serve as a foundation for the University’s research mission. About the Stony Brook FoundationThe Stony Brook Foundation is a private, not-for-profit 501(c)(3) corporation established in 1965 as the University’s sole repository for philanthropic contributions from individuals, corporations, foundations, and other organizations in support of Stony Brook University.