15-Feb-2018 11:05 AM EST, by University of Arkansas for Medical Sciences
favorite_border Larry Guthrie, center, talks to his daughter, Kayla Webb, and his wife, Anita Guthrie during a November visit to Unity Health - White County Medical Center in Searcy. Guthrie and his family made the visit to thank the personnel there for the help they provided him when he had a stroke last year.

Guthrie said if it wasn’t for assistance from the medical professionals with Northstar EMS, Unity Health – White County Medical Center in Searcy and the AR SAVES network, he probably wouldn’t have survived his stroke.

But the statewide tele-stroke network and quick-responding emergency medical professionals in Bald Knob and Searcy all saved him precious time in stroke treatment and ensured that the saved time meant a saved life.

The tele-stroke network, the Arkansas Stroke Assistance through Virtual Emergency Support (AR SAVES) at UAMS, uses a high-speed video communications system to help provide immediate, life-saving treatments to stroke patients 24 hours a day. The real-time video communication enables a stroke neurologist to evaluate whether emergency room physicians should use a powerful blood-clot dissolving agent within the critical four-and-a-half-hour period following the first signs of stroke. That’s what it did for Guthrie, too.

April 27 started out like any other for Guthrie. After finishing his lunch at home that day, he returned at 1 p.m. to work at his job as street superintendent for the city of Bald Knob. It was the last time for some time that he would remember feeling well. Minutes later, he lost his ability to speak, and co-workers called an ambulance and his daughter, Kayla Webb.

“I didn’t recognize the symptoms at first because I didn’t lose functions in my arms and legs,” Guthrie said later. “I was still walking and could move my arms. I lost my speech. I could not talk.”

Northstar EMS paramedic Jason Pugh and EMT Tim Wisinger on seeing Guthrie in his work place immediately suspected his loss of speech was due to a stroke. They called ahead to the Unity Health – White County Medical Center in Searcy so the Emergency Department there would be ready to treat him when they arrived.

Within a day after treatment, Guthrie had recovered most of his motor functions and his breathing tube was removed. He was discharged from UAMS Medical Center four days later.

“The expectancy with basal artery occlusion and stroke is slim to none,” Akdol said. “You expect them to pass away following one. There’s almost no hope in this type of situation. His survival was due to the quick action, and I can tell you the gears were well oiled.”

Both Akdol and Tan credited the AR SAVES network and the speed with which all members of the care team responded, from Northstar to Unity Health Hospital to UAMS.

“In this case the credit goes to a combination of the patient’s family, rapid response, AR SAVES, Unity Health Hospital and UAMS,” Tan said. “If one of those links was missing, he probably wouldn’t have survived. AR SAVES played a crucial role in responding to him in Searcy and transferring him to UAMS in the fastest possible way.”

By May 2017, Guthrie returned to work and has since experienced no symptoms. He said he is now more diligent about taking his blood pressure medication and monitoring his diabetes.

In addition to Tan and Akdol and the personnel at Unity, Guthrie said Northstar ambulance personnel also were key to his timely treatment.

“Those guys never get noticed for what they do,” Guthrie said. “I’ve been there and worked as a volunteer in an ambulance service and was a volunteer firefighter for 30 years. I know what they go through.”

On Nov. 14 accompanied by his wife, Anita and daughter, Guthrie reunited in the trauma room of the White County Medical Center with Pugh, Wissinger, Wisler and other staff at the Searcy hospital. Tan and Akdol spoke to him through an AR SAVES video connection.

Both Tan and Akdol complimented him on his recovery and his return to an active life. Near the end of their conversation, Tan asked him if he was taking his medication.

After Guthrie confirmed that he was, Tan said with a smile, “Good, because I don’t want to see you again … not on an AR SAVES monitor. We’ll see you outside, not in an ICU, not in an Emergency Room.”

“I don’t want to be there either,” Guthrie said as everyone laughed. 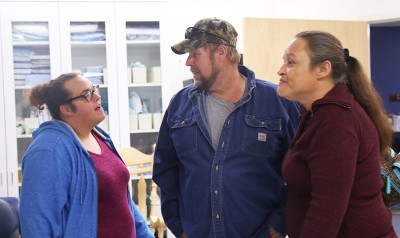 Caption: Larry Guthrie, center, talks to his daughter, Kayla Webb, and his wife, Anita Guthrie during a November visit to Unity Health - White County Medical Center in Searcy. Guthrie and his family made the visit to thank the personnel there for the help they provided him when he had a stroke last year.

Caption: Guthrie said if it wasn’t for assistance from the medical professionals with Northstar EMS, Unity Health – White County Medical Center in Searcy and the AR SAVES network, he probably wouldn’t have survived his stroke.