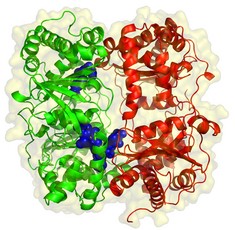 Structure of human insulin-degrading enzyme (IDE) in complex with beta- amyloid. The molecule surface of IDE is represented by light yellow. The N- and C- terminal domains of IDE are colored green and red, respectively. The beta- amyloid (blue) is entrapped inside the degradation chamber of the IDE molecule.

Newswise — Researchers from the University of Chicago and Argonne National Laboratory have deciphered the three-dimensional structure of insulin-degrading enzyme, a promising target for new drugs because it breaks down not only insulin but also the amyloid-beta protein, which has been linked to the cognitive decline of Alzheimer's disease.

In the October 19, 2006, issue of Nature (available online Oct. 11), the researchers describe the structures of insulin-degrading enzyme (IDE) in complex with four of the proteins it digests: insulin, amyloid-beta, amylin and glucagon. The structures are exciting because they suggest ways to develop drugs that could either speed up or slow down this ubiquitous enzyme's activity.

"The structure of insulin-degrading enzyme tells us a lot about how it works, which is somewhat unorthodox," said Wei-Jen Tang, Ph.D., associate professor in the Ben May Institute for Cancer Research at the University of Chicago and director of the study. "Understanding how it works gives us clues about how to design drugs either to inhibit or activate it."

"By introducing small, targeted mutations, we have already been able to increase the enzyme's activity by as much as 40-fold," he said. "That gives us a blueprint for the next step, trying to devise a drug that would produce a similar effect."

Ever since I. Arthur Mirsky discovered IDE in 1949, physicians have sought ways to manipulate it. Mirsky thought that by inhibiting the enzyme he could help diabetics by making their insulin remain active longer. More recently, as scientists realized that IDE was also involved in clearance of amyloid-beta, they have begun searching for ways to supercharge the enzyme to see if it could prevent the build-up of the amyloid plaques that are a hallmark of Alzheimer's disease.

Despite more than half a century of intensive research, however, insulin-degrading enzyme has remained "an especially elusive pharmacological target," biochemist Malcolm Leissring of the Scripps Research Institute and neurobiologist Dennis Selkoe of Harvard Medical School wrote in a commentary that accompanies the Nature article.

Using the Advanced Photon Source at Argonne National Laboratory, Tang and colleagues were able to solve the structures of this enzyme in complex with insulin and with amyoid-beta, as well as amylin and glucagon. These "high-resolution crystal structures open the door to the rational design of pharmacological modulators of this important protease," wrote Leissring and Selkoe.

The enzyme, Tang's team reports, resembles the video-game character "Pac-Man," with two bowl-shaped halves joined by a hinge at one end and held closed, most of the time, by a latch of hydrogen bonds on the other end. When the bowls come together, like a shut mouth, they enclose a chamber, shaped like a triangular prism, with a base that measures 35 x 34 x 30 angstroms and a height of 36 angstroms, large enough to contain relatively small peptides, such as insulin or amyloid-beta, which have fewer than 50 amino acids.

Although it can cleave larger molecules, the proteins IDE degrades most readily fit neatly within this chamber. Negative electrical charges on their outer surfaces help to align them with the positive charges on one inner surface of the chamber. Once they are in place, the enzyme slices them multiple times into tiny pieces, which are then discarded.

Although the enzyme's structure is similar to Pac-Man, its behavior differs. Pac-Man keeps his mouth wide open to gobble up anything in his path. With IDE the mouth is usually closed. The hydrogen-bond latch that holds the jaws together protects its active, or catalytic site.

But in a series of experiments, Tang and colleagues were able to make small mutations of IDE that altered only the latch, disrupting the alignment of contacts that normally keep the enzyme closed. Three of these altered versions of wide-open IDE proved to be 30 to 40 times more active than the normal version of the enzyme.

"This suggests that the rate-limiting step may be the speed at which the enzyme can reopen and then clamp down on a new morsel rather than the time it takes to chew something up," said Tang. "This makes us think that if we can slightly alter its shape, we can substantially boost its activity."

The researchers are now searching for small molecules that can duplicate the effects of those mutations, shifting the balance toward the open rather than the closed state. "Such compounds," the authors note, "might facilitate the clearance of amyloid-beta and other pathologically relevant IDE substrates." "By revealing IDE's active site in unprecedented detail," notes the commentary, "the new structures provided by Tang and coworkers hold great promise for finally realizing Mirsky's dream."

The National Institutes of Health, the University of Chicago Diabetes Research and Training Center and the American Heart Association funded the study. Additional authors include Yuequan Shen, Marsha Rosner, director of the Ben May Institute for Cancer Research at the University of Chicago, and Andrzej Joachimiak of the Midwest Center for Structural Genomics and Structural Biology Center at Argonne National Laboratory.