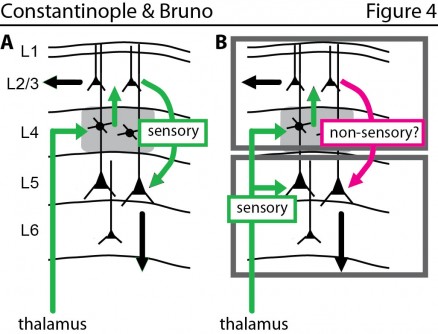 Old and new views of the cortex. (A) Since the 1950s, the cortex has been thought to be a collection of modules, or "columns," the layers of which sequentially process information before handing it off to another column. (B) This study shows that sensory signals are instead copied to two targets (L4 and L5B) and that the upper and lower halves of the cortex are independent. The "top brain" and "bottom brain," which contain different types of cells, are able to influence behavior via completely different neural pathways.

Newswise — NEW YORK, NY (June 27, 2013) — A series of studies conducted by Randy Bruno, PhD, and Christine Constantinople, PhD, of Columbia University’s Department of Neuroscience, topples convention by showing that sensory information travels to two places at once: not only to the brain’s mid-layer (where most axons lead), but also directly to its deeper layers. The study appears in the June 28, 2013, edition of the journal Science.

For decades, scientists have thought that sensory information is relayed from the skin, eyes, and ears to the thalamus and then processed in the six-layered cerebral cortex in serial fashion: first in the middle layer (layer 4), then in the upper layers (2 and 3), and finally in the deeper layers (5 and 6.) This model of signals moving through a layered “column” was largely based on anatomy, following the direction of axons—the wires of the nervous system.

“Our findings challenge dogma,” said Dr. Bruno, assistant professor of neuroscience and a faculty member at Columbia’s new Mortimer B. Zuckerman Mind Brain Behavior Institute and the Kavli Institute for Brain Science. “They open up a different way of thinking about how the cerebral cortex does what it does, which includes not only processing sight, sound, and touch but higher functions such as speech, decision-making, and abstract thought.”

The researchers used the well-understood sensory system of rat whiskers, which operate much like human fingers, providing tactile information about shape and texture. The system is ideal for studying the flow of sensory signals, said Dr. Bruno, because past research has mapped each whisker to a specific barrel-shaped cluster of neurons in the brain. “The wiring of these circuits is similar to those that process senses in other mammals, including humans,” said Dr. Bruno.

The study relied on a sensitive technique that allows researchers to monitor how signals move across synapses from one neuron to the next in a live animal. Using a glass micropipette with a tip only 1 micron wide (one-thousandth of a millimeter) filled with fluid that conducts nerve signals, the researchers recorded nerve impulses resulting from whisker stimulation in 176 neurons in the cortex and 76 neurons in the thalamus. The recordings showed that signals are relayed from the thalamus to layers 4 and 5 at the same time. Although 80 percent of the thalamic axons went to layer 4, there was surprisingly robust signaling to the deeper layer.

“This was very surprising,” said Dr. Constantinople, currently a postdoctoral researcher at Princeton University’s Neuroscience Institute. “We expected activity in the lower layers to be turned off or very much diminished when we blocked layer 4. This raises a whole new set of questions about what the layers actually do.”

The study suggests that upper and lower layers of the cerebral cortex form separate circuits and play separate roles in processing sensory information. Researchers think that the deeper layers are evolutionarily older—they are found in reptiles, for example, while the upper and middle layers, appear in more evolved species and are thickest in humans.

One possibility, suggests Dr. Bruno, is that basic sensory processing is done in the lower layers: for example, visually tracking a tennis ball to coordinate the movement needed to make contact. Processing that involves integrating context or experience or that involves learning might be done in the upper layers. For example, watching where an opponent is hitting the ball and planning where to place the return shot.

“At this point, we still don’t know what, behaviorally, the different layers do,” said Dr. Bruno, whose lab is now focused on finding those answers.

Nobel-prize-winning neurobiologist Bert Sakmann, MD, PhD, of the Max Planck Institute in Germany, describes the study as “very convincing” and a game-changer. “For decades, the field has assumed, based largely on anatomy, that the work of the cortex begins in layer 4. Dr. Bruno has produced a technical masterpiece that firmly establishes two separate input streams to the cortex,” said Dr. Sakmann. “The prevailing view that the cortex is a collection of monolithic columns, handing off information to progressively higher modules, is an idea that will have to go.”

“Bruno’s work goes a long way toward overturning the conventional wisdom and provides new insight into the functional segregation of sensory input to the mammalian cerebral cortex, the region of the brain that processes our thoughts, decisions, and actions,” said Thomas Jessell, PhD, Claire Tow Professor of Motor Neuron Disorders in Neuroscience and a co-director of the Mortimer B. Zuckerman Mind Brain Behavior Institute and the Kavli Institute for Brain Science. “Developing a more refined understanding of cortical processing will take the combined efforts of anatomists, cell and molecular biologists, and animal behaviorists. The Zuckerman Institute, with its multidisciplinary faculty and broad mission, is ideally suited to building on Bruno’s fascinating work.” Funding for the study was provided by the National Institute of Neurological Disorders and Stroke (Grant # NS069679), the Rita Allen Foundation, and the Klingenstein Fund.

About Columbia UniversityAmong the world’s leading research universities, Columbia University in the City of New York continually seeks to advance the frontiers of scholarship and foster a campus community deeply engaged in understanding and confronting the complex issues of our time through teaching, research, patient care and public service. The University is comprised of 16 undergraduate, graduate and professional schools, and four affiliated colleges and seminaries in Northern Manhattan, as well as a wide array of research institutes and global centers located in major cities around the world. More than 40,000 accomplished students, award-winning faculty and professional staff define the University’s underlying values and commitment to pursuing new knowledge and educating informed, engaged citizens. Founded in 1754 as King’s College, Columbia is the fifth oldest institution of higher learning in the United States.

About Columbia University Medical CenterColumbia University Medical Center provides international leadership in basic, preclinical, and clinical research; medical and health sciences education; and patient care. The medical center trains future leaders and includes the dedicated work of many physicians, scientists, public health professionals, dentists, and nurses at the College of Physicians and Surgeons, the Mailman School of Public Health, the College of Dental Medicine, the School of Nursing, the biomedical departments of the Graduate School of Arts and Sciences, and allied research centers and institutions. Columbia University Medical Center is home to the largest medical research enterprise in New York City and State and one of the largest faculty medical practices in the Northeast. For more information, visit cumc.columbia.edu or columbiadoctors.org.