Study Explores Possibility of Life on Moons of Rogue Planets

UNLV astrophysicists ponder "reservoirs of life" on the moons of planets expelled by their hosts and drifting through the galaxy. 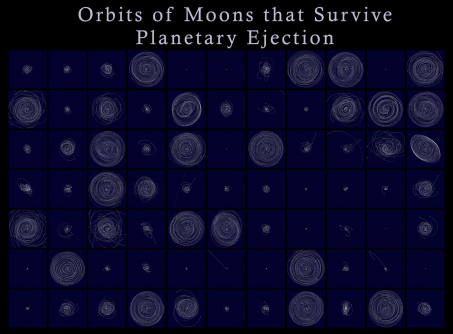 In a new study, UNLV astrophysicist Jason Steffen explores the possibility of life on the moons of rogue planets—solitary planets ejected from their host star which drift through the galaxy.

Newswise — It sounds like the stuff of George Lucas' universe, but it may be real. There may be life on the moons of rogue planets — solitary planets that have been ejected from their host star and which drift through the galaxy.

A few observations and some prevailing theories about planet formation and life inspired UNLV astrophysicist Jason Steffen and his undergraduate student Ian Rabago to consider this possibility. The results of their study will appear in the Monthly Notices of the Royal Astronomical Society.

When it comes to life in the solar system, one place scientists are keen to explore is Jupiter's moon Europa. The constant gravitational interactions between Europa, its sibling moons, and Jupiter keep the moon's interior toasty warm — warm enough that its neighboring moon Io has active volcanoes powered by this effect. Since Europa is made largely of water instead of rock, that warmth implies a large subsurface ocean. These oceans have been around for billions of years and will persist for billions more.

At the same time, scientists believe that young planetary systems often go unstable, ejecting planets large and small from the system. Indeed, planet-planet scattering is a leading theory for the formation of hot Jupiters (Jupiter-like planets on exceptionally small orbits of only a few days). The hot Jupiters are planetary siblings that remain behind following the planet ejection, but their orbits are dramatically altered from where they began.

Connecting these dots offer the potential for more reservoirs of life in the galaxy. As Steffen says "If these ejected planets can retain their moon systems, you have the possibility of life-bearing worlds drifting through the galaxy with no host star providing energy."

Instead, the energy comes from tidal heating as the moons interiors are constantly warmed by friction while they are stretched and flexed by the planet and the other moons.

Rabago and Steffen found that a large fraction of the moons in a system can survive the ejection process, a crucial ingredient for having a place to live. "We even found that special orbital configurations will survive ejection," said Rabago. "Resonant configurations, like what we see with Io, Europa, and Ganymede around Jupiter, will survive more than half of the time."

Thus, if the seeds for life were there before the planet was ejected, the conditions for life will remain long afterwards.

Campaigns to detect rogue planets show that they do exist, and that they may number well into the billions. Detecting the moons orbiting these planets is a challenge with current telescopes, but knowing how frequently the moons will survive tells us a lot about what might be going on around these lonely objects and how life might be distributed throughout the galaxy.