Study Links Delay of Gratification To How Brain Structures Are Connected 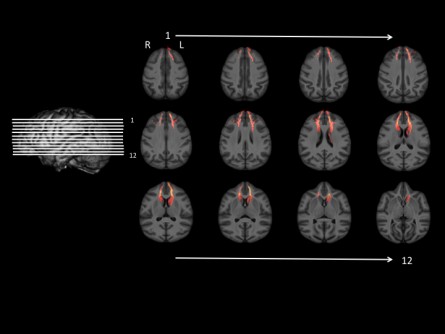 Pictured are a series of 12 serial views of a chimpanzee's brain, projecting from the base of the brain, showing the white matter connectivity between the caudate and the dorsal prefrontal cortex. The scans were projected onto a standard chimpanzee template brain.

Newswise — ATLANTA—The ability to delay gratification in chimpanzees is linked to how specific structures of the brain are connected and communicate with each other, according to researchers at Georgia State University and Kennesaw State University.

Their findings were published June 3 in the Proceedings of the Royal Society B: Biological Sciences.

This study provides the first evidence in primates, including humans, of an association between delay of gratification performance and white matter connectivity between the caudate and the dorsal prefrontal cortex in the right hemisphere, said Dr. Robert Latzman, assistant professor in the Department of Psychology at Georgia State, who led the study with Dr. William Hopkins, professor of neuroscience at Georgia State.

The researchers found higher white matter connectivity between the caudate and dorsal prefrontal cortex in the right hemisphere of the brain was associated with the learning of delay of gratification.

Delay of gratification, the need to control emotional and behavioral impulses, is one of the earliest demands placed on individuals and is of critical importance, Latzman said.

“Delay of gratification or self-control is core to a number of different types of mental illnesses, most notably ADHD (attention deficit/hyperactivity disorder),” said Latzman. “This ability and the developmental process that occurs when children learn to delay gratification and inhibit an immediate want for a longer-term goal is a hugely important developmental milestone.”

There is a considerable need for understanding connections among brain regions associated with delay of gratification abilities, such as the two regions that showed significant results in this study, Latzman said.

The task used to measure delay of gratification in chimpanzees in this study is a parallel task to that used in a series of famous experiments conducted by psychologist Walter Mischel at Stanford University in the 1960s and 1970s. Preschoolers were placed alone in a room furnished with a small desk and on the desk were two marshmallows and a bell. The researcher told the child he had to leave the room, but when he returned, the child could eat both marshmallows. If the child wanted to eat one marshmallow before the researcher returned, the child could ring the bell and eat one, but not both. When the researcher shut the door, some children ate the marshmallow right away and others tried to distract themselves, according to The New York Times.

In follow-up studies, Mischel found that delay of gratification abilities at age 4 can predict a number of behaviors into adolescence and adulthood, including planning and reasoning abilities, control of negative emotions, standardized test scores, higher educational attainment, better coping abilities, fewer interpersonal difficulties, less substance use and higher self-esteem and self-worth more than 20 years later, according to Latzman.

The current study involved 49 chimpanzees that were trained to perform a delay of gratification task. Researchers placed grapes in a transparent PVC pipe with a closed bottom and trained the chimpanzees to delay gratification in receiving the grapes. The study used chimpanzees because their self-control abilities, as compared to other model species such as monkeys, closely resemble those of human children and both their neuroanatomy and neural development are quite similar to humans. They also share a very high degree of genetic overlap, Latzman said.

All chimpanzees received DTI (diffusion tensor imaging) brain scans during their annual physical examination. Data were acquired that allowed the researchers to examine white matter tracts, or bundles of neurons that connect one part of the nervous system with another, between the caudate and prefrontal cortex. The white matter connectivity between these brain structures was compared to the chimpanzees’ delay of gratification abilities.

The study is supported by the National Institutes of Health.

Proceedings of the Royal Society B: Biological Sciences, June 2015