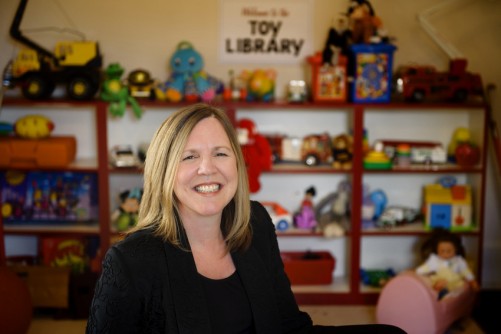 Newswise — A new study, co-authored by Julie Ozanne, marketing professor in the Pamplin College of Business at Virginia Tech, finds that toy libraries offer multiple benefits for children, their parents, their community, and society in general.

Toy libraries mean many different things to their users, Ozanne said, “from being a good way to save money and have fun to a political act of conscience and a way to build community.”

Toy libraries, which originated in the United States but are more common today in Europe and elsewhere, have a borrowing process similar to public book libraries.

Toy libraries provide children with developmental tools for play. For parents and other adults, the libraries are an important financial and social resource, Ozanne said.

Parents in her study compared the pleasure of toy borrowing to the pain of toy shopping. Parents viewed the toy store setting, with its advertising and brands, as fraught with potential conflict and described toy shopping with their kids as a stressful task, full of begging, negotiating, directives (“don’t touch this,” “stay here,” “do this”), and struggles to control and limit their offspring. Visits to the toy library were far less stressful. With little financial outlay at stake, parents gave their children significantly more latitude in borrowing toys. Children were encouraged to try toys that challenged their strengths, explored underdeveloped skills, or developed new ones. With the displays, packaging, and branding aimed at influencing purchases largely absent, she said, “toy libraries offer a foil to marketplace messages that parents fear will fuel their children’s potential for materialism and consumerism.”

Parents in the study believed that borrowing toys helps their children develop a different relationship to goods. Children learn that they can be just as creative in playing with communal, used toys as toys they own, Ozanne said — that, as one mother put it, “toys can be just whatever a child is prepared to make of them.”

Toy libraries also educate children on the nature of citizenship. “Borrowing teaches children to share collective goods, take their turn, be considerate of the next user, and be good stewards by taking care of the toys.” Children “are regularly asked to think of other people as they borrow, use, and return toys,” she said. One mother explained to her daughter: “another family might need this.”

Toy libraries also supply opportunities for social and civic engagement through volunteer work at the libraries, for example, and allow parents and children to socialize and form informal networks with other users: “The libraries directly build the social fabric of the local communities through ongoing social interactions, connections, and exchanges.”

Ozanne and her co-author — sister Lucie Ozanne, a senior lecturer in marketing at the University of Canterbury in New Zealand — conducted the study in New Zealand.

The study, which will be published in a forthcoming issue of the Journal of Public Policy and Marketing (http://bit.ly/huFXUo), makes three public-policy recommendations. Read the full story, “Toy libraries: Have fun, save money, build community,” in this spring’s Pamplin magazine.