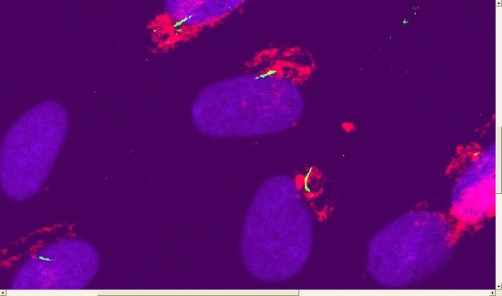 Microscopic image of human cells (stained purple), showing the primary cilium (green). A new study shows how FTO, a gene commonly associated with obesity, contributes to weight gain. Changes in this gene indirectly affect the function of the cilium -- a hair-like appendage found on brain and other cells. Irregularities in the cilium, in turn, can affect receptors for leptin, which suppresses appetite.

Newswise — NEW YORK, NY (May 22, 2014) — Researchers have discovered how a gene commonly linked to obesity—FTO—contributes to weight gain. The study shows that variations in FTO indirectly affect the function of the primary cilium, a little-understood hair-like appendage on brain and other cells. Specific abnormalities of cilium molecules, in turn, increase body weight, in some instances, by affecting the function of receptors for leptin, a hormone that suppresses appetite. The findings, made in mice, suggest that it might be possible to modify obesity through interventions that alter the function of the cilium, according to scientists at Columbia University Medical Center (CUMC).

“If our findings are confirmed, they could explain how common genetic variants in the gene FTO affect human body weight and lead to obesity,” said study leader Rudolph L. Leibel, MD, the Christopher J. Murphy Memorial Professor of Diabetes Research, professor of pediatrics and medicine, and co-director of the Naomi Berrie Diabetes Center at CUMC. “The better we can understand the molecular machinery of obesity, the better we will be able to manipulate these mechanisms and help people lose weight.”

The study was published on May 6 in the online edition of Cell Metabolism.

Since 2007, researchers have known that common variants in the fat mass and obesity-associated protein gene, also known as FTO, are strongly associated with increased body weight in adults. But it was not understood how alterations in FTO might contribute to obesity. “Studies have shown that knocking out FTO in mice doesn’t necessarily lead to obesity, and not all humans with FTO variants are obese,” said Dr. Leibel. “Something else is going on at this location that we were missing.”

In experiments with mice, the CUMC team observed that as FTO expression increased or decreased, so did the expression of a nearby gene, RPGRIP1L. RPGRIP1L is known to play a role in regulating the primary cilium. "Aberrations in the cilium have been implicated in rare forms of obesity,” said Dr. Leibel. “But it wasn’t clear how this structure might be involved in garden-variety obesity.”

Dr. Leibel and his colleague, George Stratigopoulos, PhD, associate research scientist, hypothesized that common FTO variations in noncoding regions of the gene do not change its primary function, which is to produce an enzyme that modifies DNA and RNA. Instead, they suspected that FTO variations indirectly affect the expression of RPGRIP1L. “When Dr. Stratigopoulos analyzed the sequence of FTO’s intron—its noncoding, or nonprotein-producing, portion—we found that it serves as a binding site for a protein called CUX1,” said Dr. Leibel. “CUX1 is a transcription factor that modifies the expression of RPGRIP1L.”

Next, Dr. Stratigopoulos set out to determine whether RPGRIP1L plays a role in obesity. He created mice lacking one of their two RPGRIP1L genes, in effect, reducing but not eliminating the gene’s function. (Mice that lack both copies of the gene have several serious defects that would obscure the effects on food intake.) Mice with one copy of RPGRIP1L had a higher food intake, gained significantly more weight, and had a higher percentage of body fat than controls.

In a subsequent experiment, the CUMC team found that RPGRIP1L-deficient mice had impaired leptin signaling. “The receptors didn’t convene properly on the cell surface around the base of cilium,” said Dr. Leibel. “RPGRIP1L appears to play a role in getting leptin receptors to form clusters, where they are more efficient in signaling.”

“Overall,” said Dr. Leibel, “our findings open a window onto the possible role of the primary cilium in common forms of obesity.”

The CUMC team is now conducting studies to learn more about the various components of the FTO- RPGRIP1L pathway, which ciliary proteins are affected by changes in this pathway, and how these proteins mediate actions of leptin receptors.

The Naomi Berrie Diabetes Center at CUMC opened in 1998 to serve the 1.6 million people with diabetes in the New York area, by combining world-class diabetes research and education programs with family-oriented patient care. Founded with support from the Russell Berrie Foundation and other friends, the center is named in honor of the mother of the late Russell Berrie, founder of RUSS™ Toys. The center’s more than 100 faculty and students conduct basic and clinical research related to the pathogenesis and treatment of all forms of diabetes and its complications. For more information, visit www.nbdiabetes.org.