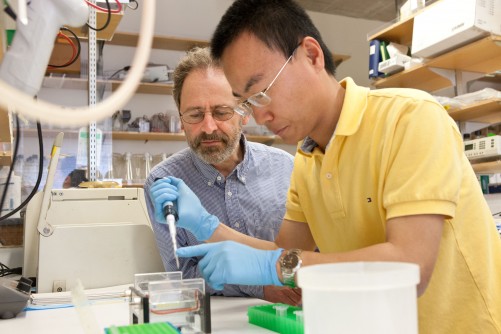 Newswise — LA JOLLA, CA---- In their extraordinary quest to decode human metabolism, researchers at the Salk Institute for Biological Studies have discovered a pair of molecules that regulates the liver's production of glucose---- the simple sugar that is the source of energy in human cells and the central player in diabetes. In a paper published April 8 in Nature, the scientists say that controlling the activity of these two molecules---- which work together to allow more or less glucose production---- could potentially offer a new way to lower blood sugar to treat insulin-resistant type II diabetes. They showed, through an experimental technique, that this was possible in diabetic mice. "If you control these switches, you can control the production of glucose, which is really at the heart of the problem of type 2 diabetes," says Professor Marc Montminy, head of Salk's Clayton Foundation Laboratories for Peptide Biology. The need for new drugs is accelerating, says Montminy, as almost 26 million Americans have type II diabetes, and an estimated 79 million people are at risk of developing the condition. Diabetes is the sixth leading cause of death in the United States, and treatment costs are estimated at $116 billion annually. In order to develop new and effective treatments for diabetes, researchers need to understand the complex and delicate biology behind human metabolism as well as the disorders that develop when this finely tuned system is out of balance, Montminy says. During the day, humans burn glucose, derived from the food we eat. This is the fuel that supplies the muscles and other parts of the body expending energy. At night, when we sleep, we revert to stored fat as a source of very dependable but slowly released energy. But certain parts of the body, most notably the brain, require glucose as a source of energy, even when we fast. Pancreatic islet cells control both sides of this energy equation. Located in the pancreas, they produce glucagon, a hormone released during fasting, to tell the liver to make glucose for use by the brain. This process is reversed when we feed, and when the pancreatic islets release insulin, which tells the liver to stop making glucose. Thus glucagon and insulin are part of a feedback system designed to keep blood glucose at a stable level. Montminy's lab has for years focused on the central switches that control glucose production in the liver and others that control glucose sensing and insulin production in the pancreas. Among his key findings is that glucagon---- the fasting hormone---- turns on a genetic switch (CRTC2) that ramps up production of glucose in the blood. In turn, when insulin is increased in the blood, activity of CRTC2 is inhibited, and the liver produces less glucose. "But in insulin-resistant type II diabetic individuals, the CRTC2 switch is turned on too strongly because the insulin signal is not getting through," Montminy says. "As a result, the liver produces too much glucose and the level of glucose in the blood stream is too high. Over a period of 10 to 20 years, the abnormal elevation of glucose leads to chronic complications including heart disease, blindness and kidney failure." The new findings in the Nature study identify a relay system that explains how glucagon activates the CRTC2 switch during fasting, and how that system is compromised during diabetes. The scientists say this relay system involves a molecular receptor (IP3) on the outside of liver cells that they call a "molecular spigot." Glucagon opens the IP3 spigot during fasting, allowing an increase in calcium, a common signaling molecule in the cell. This stimulates a molecular gas pedal, of sorts, known as calcineurin, which revs up CRTC2, activating genes that allow the liver to drive the metabolic engine by producing more glucose. This is important, Montminy says, because the team also discovered that activity of the IP3 receptor and calcineurin in the liver are increased in diabetic insulin resistance, resulting in more blood sugar. The findings therefore suggest that agents that can selectively damp down activity of the IP3 spigot and the calcineurin accelerator might help to shut down the CRTC2 switch and to lower blood sugar in type II diabetic patients, he says. That is precisely what happened when the researchers used these compounds on liver cells. "We obviously have a lot of work to do to find out whether such a strategy might work in humans," he says. The research team includes investigators from Salk Institute, Columbia University, University of California San Diego and University of Ottawa. In addition to Montminy, the coauthors on the paper are Yiguo Wang, Gang Li, Jason Goode, Jose Paz, Kunfu Ouyang, Robert Screaton, Wolfgang Fischer, Ju Chen and Ira Tabas. The study was funded by grants from the National Institutes of Health, the Kieckhefer Foundation, the Clayton Foundation for Medical Research and the Leona M. and Harry B. Helmsley Charitable Trust.