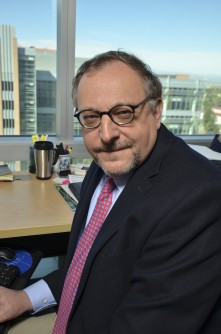 “We haven’t seen any new drug approvals in first-line squamous lung cancer in many, many years. I’m very excited to see a new agent that has survival benefit in this space,” says Fred R. Hirsch, MD, PhD, investigator at the University of Colorado Cancer Center, CEO of the International Association for the Study of Lung Cancer, and one of the trial’s co-principal investigators.

The study, known as SQUIRE, included 184 investigative sites in 26 countries. Patients with stage IV squamous non-small cell lung cancer were eligible for the study, regardless of EGFR mutation status. Additionally, the CU Cancer Center performed biomarker analysis of tissue samples, evaluating patient tumor samples for amplification of the EGFR gene. The efficacy of the drug specifically in the population of patients with EGFR amplification will be released during the 16th World Conference on Lung Cancer, September 6-9, 2015 in Denver, Colo.

Notably, necitumumab uses a novel approach to activate the immune system against tumor tissue. Some cancers mutate in ways that let them over-express epidermal growth factor receptor (EGFR). These cells, coated with EGFR, “trap” more epidermal growth factor, signaling these cells to continuously grow and divide in a cancerous way. Thus coated with EGFR, these cancer cells are also marked as different than the surrounding, healthy tissue. The goal of immunotherapies directed at EGFR is to teach the immune system to specifically attack these cells marked by the overabundance of EGFR.

Researchers can manufacture monoclonal antibodies specific to proteins – again, if a protein is over-expressed on a tumor, introducing the corresponding monoclonal antibody will tell the immune system to attack tumor cells that express this protein.

“As we’ve seen, this is a very promising approach,” Hirsch says. “If you discover a protein that is uniquely expressed or over-expressed by a tumor, in this case EGFR, we can use monoclonal antibodies targeting that protein to inhibit the physiological consequences of EGFR activation, which, without therapy, would otherwise lead to cancer progression.”

Necitumumab uses “fully human” antibodies, which are produced without the hybridization with mouse DNA. This approach (described in a 1995 paper in the journal International Reviews in Immunology), though technically challenging, may help patients treated with necitumumab avoid some of the side effects associated with drugs based on chimeric antibodies.

“While we saw more side effects in the group treated with necitumumab in combination with the two chemotherapies, we found that the safety profile of necitumumab plus gemcitabine and cisplatin was acceptable and in line with expectations,” Hirsch says.

Regulatory submission of necitumumab for FDA approval is completed, with a decision expected soon.

“This is an improvement. Based on this large prospective study in first-line therapy of squamous lung cancer, a subtype of lung cancer where there is an urgent unmet need for treatment improvement, the drug warrants approval,” Hirsch says.