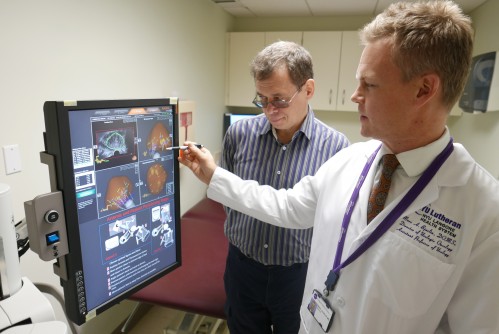 Newswise — Mikhail Kurbesov enjoyed relatively good health all of his life. But, when he turned 60 last year, though he had no particular complaints or symptoms, he was counseled to have a prostate cancer screening.

Kurbesov was referred to urologist Marc Bjurlin, DO, director of urologic oncology at NYU Lutheran Medical Center and clinical assistant professor of urology at NYU School of Medicine. The hydraulic engineer, who recently emigrated from Russia, confessed that business trips and other distractions kept him from seeing a physician regularly. Thankfully, he kept this particular appointment. Understanding the limitations of tests that could be done, Kurbesov opted to have a blood test to screen for prostate cancer using PSA (Prostate Specific Antigen). The result revealed a high PSA, an indicator of possible prostate cancer. To determine the cause of his abnormal PSA, Bjurlin recommended doing a magnetic resonance imaging (MRI) and an ultrasound fusion targeted biopsy.

“For years urologists could only make an educated guess about the area in the prostate to be biopsied,” Bjurlin says. “At NYU Lutheran, the availability of Artemis—-a multifunctional, computerized ultrasound system that works in combination with diagnostic MRI—eliminates guesswork.” Kurbesov’s MRI and biopsy showed an abnormal area of his prostate—-a high grade prostate cancer along with some low grade cancer outside the targeted zone. “This cancer probably would have been under-diagnosed if we had not done the Artemis targeted biopsy,” says Bjurlin. “We counseled Mr. Kurbesov on treatment options, risks and benefits. He chose to undergo robotic radical prostatectomy.”

Bjurlin and his fellow urologists at NYU Langone Medical Center in Manhattan were among the country’s earliest pioneers to move beyond conventional prostate cancer detectors and adopt this highly effective 3-D ultrasound-imaging system. The state-of-the art diagnostic device has been used at NYU Langone for many years–-and is now available in Brooklyn exclusively at NYU Lutheran.

“Artemis allows precise targeting for needle biopsy of suspicious areas of the prostate. Many high-grade prostate cancers are no longer being missed,” says Herbert Lepor, MD, the Martin Spatz Chair of the Department of Urology for the NYU Langone health system. ““Fewer needles are required to identify cancers that require treatment. And the effectiveness of the system decreases the likelihood of additional biopsies at a later date.”

The da Vinci Xi at NYU Lutheran is the most advanced technology for robot-assisted surgery. It provides a three-dimensional view, high magnification, and precision in instrument movement and adjustment, giving surgeons greater control and ability to preserve tissues and prevent complications.

With surgical instruments inserted through small incisions in the abdomen. Kurbesov’s entire prostate, along with lymph nodes in this pelvis, were removed through an incision in his belly button. He was able to go home after an overnight stay in the hospital."There are many advantages to robotic-assisted prostate surgery, such as less blood loss, shorter hospital stay, little scarring and a quicker to return to activities of daily living," remarks Bjurlin. “Patients often are up and about a few hours after surgery.”

When he returned for a follow-up visit a week later, Bjurlin reviewed the pathology report and told Kurbesov he had a very good long-term prognosis--97 percent chance of that he will be alive at 15 years. “Mr. Kurbesov, and other men treated for the same type of cancer who are treated similarly, most likely will not die from the disease,” Bjurlin says. “We will continue to monitor his progress.”

Kurbesov was very pleased and relieved to hear the good news. “Because of my line of work, I understand diagnostics,” he said. “Diagnostics is the foundation of treating a problem. I was very happy with my robotic surgery. I felt I was under very good care that utilized high-quality diagnostic and treatment advances.”