SUSU Scientists Study Light to Create Technologies of the Future 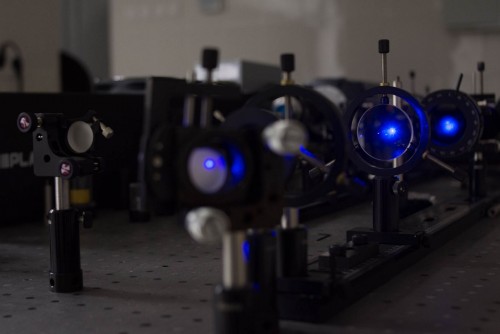 Newswise — Scientists of the Faculty of Physics of the SUSU Institute of Natural Sciences and Mathematics predict new optical effects in light beams which in perspective will help create technologies of the future, and even reveal cancer in early stages.

A big project on Spin-orbital Interaction of Light for Photonics of the Future by the scientists of Institute of Natural Sciences and Mathematics deals with searching for and studying the effects of the occurring spin-orbital interaction of light, that is the interinfluence between the light propagation path and such property of light as polarization. The research is supervised by Natalia Kundikova, Doctor of Sciences (Physics and Mathematics), Professor, Dean of the Faculty of Physics of the SUSU Institute of Natural Sciences and Mathematics, chief research fellow at Non-linear Optics Laboratory of the Institute of Electrophysics at the Urals Division of the Russian Academy of Sciences. Dr. Kundikova is holder of Galileo Galilei award for research in the field of physical optics.

“According to classical physics, a light beam is characterised with polarization and propagation direction. In quantum physics, spin and orbital angular momentums of photon correspond to these characteristics. The existence of spin-orbital interaction of photon in optically-inhomogeneous medium was first proved by experiment at our university in 1991, by a group of scientists guided by the Corresponding Member of the Russian Academy of Sciences Boris Zeldovich. This effect was revealed by experiments in turning speckle pattern of circularly polarized light passing through optic fiber in case of altered sign of circular polarization,” explains Natalia Kundikova.

A speckle pattern of light emitted by fiber is a distributed intensity of light in the form of interference of several modes each of which passes through optical waveguide with its own phase velocity.

“Through experiments we were able to demonstrate that light polarization and trajectory may influence the structure of a light beam. As for the other two effects, it’s just a prediction for now. We need to understand in what conditions these effects may be observed, and try studying them through experiments. But it’s a very difficult task,” shares Dr. Kundikova.

The peculiarity of optical experiments is that scientists have to create their own installations for experiments. To do that, optical constructors are used which allow to produce beams with ring structure. The scientists from South Ural State University are planning, jointly with their colleagues from France, to study the so called “bagel” beams with special wave front. It is proposed to use such beams for early cancer detection.

Originally, photonics dealt with studying the basic working principles of optical signals and fields, as well as their application for creation of devices. But today in comprises such fields as laser technology, optical computing, medical diagnostics and therapy. That is why the project by the SUSU scientists on Spin-orbital Interaction of Light for Photonics of the Future is of huge importance for development and application of optics in different fields. For instance, one of the Department’s research studies aims at improving optic-fiber sensors for measuring various physical quantities.

Following the research results, 2 reports were presented at the 24th Congress of the International Commission for Optics (Tokyo, Japan), and a presentation was delivered at the 4th International Conference on Optical Angular Momentum (Anacapri, Italy). In October 2018 it is planned to present reports at international conferences in the Netherlands and in France. In 2017 Natalia Kundikova was elected Vice President of the International Commission for Optics (ICO) for the term of three years, and and was accepted as an Honorary Member to the Optical Society of America (OSA).