T. rex was a champion walker, super-efficient at lower speeds 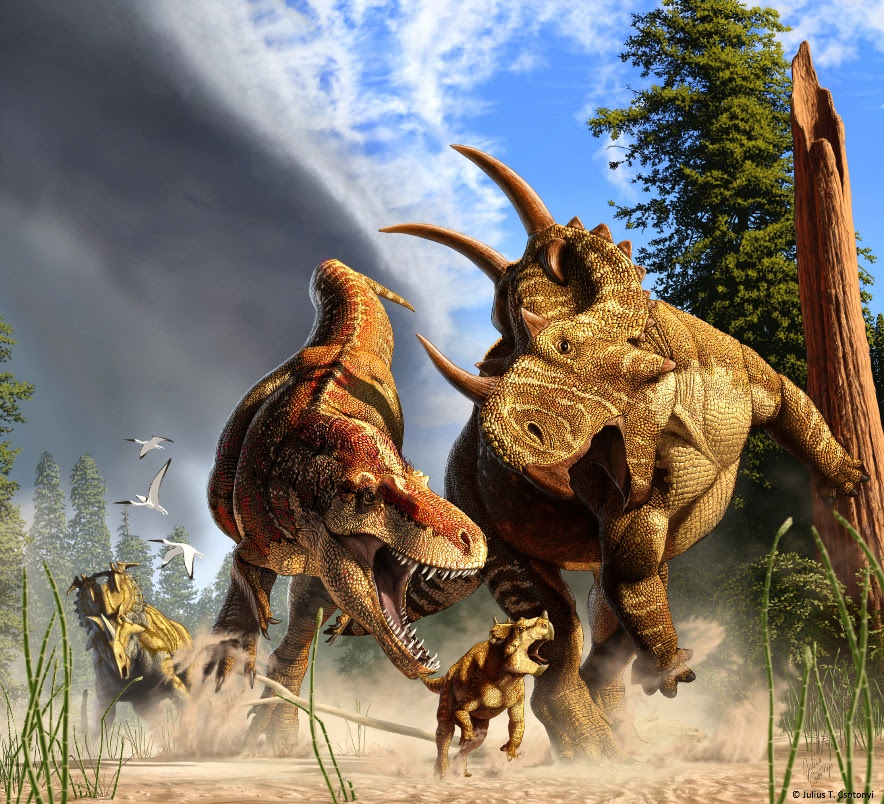 Daspletosaurus (a cousin of T. rex) chasing a Spinops (a centrosaurine ceratopsian, in the same family as Triceratops)

Newswise — While smaller dinosaurs needed speed, huge predators like T. rex were optimized for energy-efficient walking, according to a study published May 13, 2020 in the open-access journal PLOS ONE by Alexander Dececchi of Mount Marty College, South Dakota and colleagues.

Theropod dinosaurs included the dominant bipedal predators of the Mesozoic Era, and plenty of research has explored the relationship between their locomotion and lifestyle. Much of this work has focused on running speeds, but in this study, Dececchi and colleagues argue that speed might not be the most important factor, especially for the biggest theropods.

The authors gathered data on limb proportions, body mass, and gaits of more than 70 species of theropod dinosaurs. They then applied a variety of methods to estimate each dinosaur’s top speed as well as how much energy they expended while moving around at more relaxed walking speeds. Among smaller to medium-sized species, longer legs appear to be an adaptation for faster running, in line with previous results. But for the real titans weighing over 1000kg, top running speed is limited by body size, so longer legs instead correlated with low-energy walking.

Running is important for hunters, but they generally spend much more time roaming around in search of food. The authors suggest that while speed was a major advantage for dinosaurs who needed to hunt prey and also escape predators, the biggest theropods relied more on efficiency while foraging. Among giant theropods, the champions were tyrannosaurs like T. rex, whose long legs were apparently well-adapted for reduced energy expenditure while prowling for prey.

The authors add: “Size matters. Smaller theropods were both hunter and the hunted, so their lives were lived at high speed. For giants like T. rex, a top predator with no natural enemies, life was a marathon not a sprint.”

Funding: The author(s) received no specific funding for this work.

In your coverage please use this URL to provide access to the freely available article in PLOS ONE:  https://journals.plos.org/plosone/article?id=10.1371/journal.pone.0223698

Caption: Daspletosaurus (a cousin of T. rex) chasing a Spinops (a centrosaurine ceratopsian, in the same family as Triceratops)