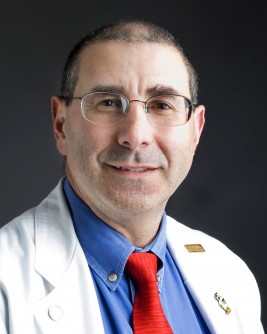 N. Scott Litofsky, M.D., chief of the Division of Neurological Surgery at the MU School of Medicine and senior author of the study

Newswise — COLUMBIA, Mo. (Feb. 16, 2017) ― Tumors that originate in other organs of the body and spread to the brain are known as metastatic brain tumors. According to the American Brain Tumor Association, this type of tumor is the most common in adults, affecting as many as 300,000 people each year. University of Missouri School of Medicine researchers compared two common postsurgical therapies for metastatic brain tumors and found that stereotactic radiosurgery can provide better outcomes for patients compared to whole-brain radiation.

During whole-brain radiation therapy, beams of radiation cover the entire brain. Because it treats the whole brain, the therapy is thought to control the spread of tumors by treating both identifiable and hidden cancerous cells. However, whole-brain radiation has been associated with a decline in cognitive functions that can negatively affect a patient’s quality of life.

In stereotactic radiosurgery, radiation is delivered to more precise areas of the brain. Because it is a targeted therapy, less collateral damage occurs to healthy brain tissue. As a result, patients experience less cognitive decline when compared to whole-brain radiation, and experience a higher quality of life.

“Although radiosurgery has been shown to be an effective post-surgical treatment for metastatic brain tumors, previous studies did not compare patient outcomes from a single hospital over the same period of time,” said N. Scott Litofsky, M.D., chief of the Division of Neurological Surgery at the MU School of Medicine and senior author of the study. “Our study is one of the first to directly compare outcomes of patients treated at the same hospital during a set period of time. Ultimately, our findings reinforce the use of radiosurgery over whole-brain radiation.”

“For patients with metastatic cancer of the brain, the importance of surviving for a longer period of time cannot be overstated,” Litofsky said. “In our practice, we now treat patients almost exclusively with radiosurgery following their surgery. Although this therapy does cost more, results often can be achieved in one to three visits compared to 10 to 12 visits for whole-brain radiation. With these considerations, we strongly suggest physicians consider radiosurgery as an initial radiation treatment after surgery.”

The study, “Radiosurgery to the Postoperative Tumor Bed for Metastatic Carcinoma Versus WholeBrain Radiation after Surgery,” recently was published in the medical journal Cureus. Research reported in this publication was supported by a Bob Willis Medical Student Fellowship of the American Brain Tumor Association and a Medical Student Summer Research Fellowship from the MU School of Medicine Office of Medical Research. The researchers have no conflicts of interest to declare related to this study. The content is solely the responsibility of the authors and does not necessarily represent the official views of the funding agencies.