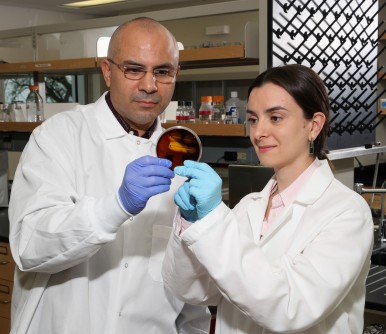 SDSU dairy science associate professor Ashraf Hassan and doctoral student Nuria Garcia are refining an enzyme extracted from a unique bacterial strain that removes buildup in dairy equipment called biofilm. Garcia received a national award from the American Dairy Science Association in 2013 for a poster describing her work on biofilms. 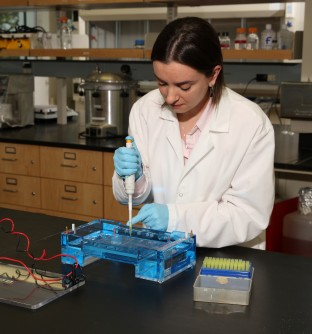 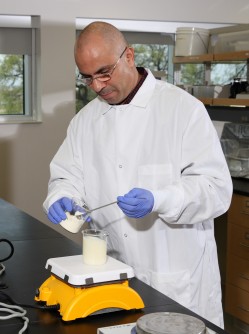 Newswise — Consumers may have more palatable low-fat products and milk producers a solution to an industrywide problem through use of a unique strain of lactic acid bacteria, according to Ashraf Hassan, associate professor of dairy science at South Dakota State University. Low-fat products tend to have inferior texture and flavor because removing fat makes their structure rubbery, he explained. After examining bacteria from the dairy environment for more than 15 years, Hassan found a strain that mimics fat.

Some bacteria produce polysaccharides which can contain hundreds of sugar molecules, such as glucose, attached to one another. They bind significant amounts of water, according to Hassan.

The strain Hassan discovered produces polysaccharides with high water binding capacity that then improve the quality of low-fat dairy products. “They give the same mouth feel [as fat] by increasing the thickness and giving smoothness,” he added.

Hassan first used the bacteria to make low-fat cheese, which the nationally recognized SDSU dairy products judging team could not discern from regular high-fat cheese. The bacteria’s patent-pending application has been licensed to a multinational dairy ingredients company. But that’s only the beginning. The polysaccharide produced by this strain also improves the functionality of proteins recovered from the cheese by product, whey, Hassan explained. This protein-polysaccharide mixture can be dried and added to salad dressing, mayonnaise or even processed meats like sausage. Its gelling properties will help make products that “firm quickly and have a much stronger body,” he said.

Not only does this add value to the whey, but the mixture reduces manufacturing costs, he said. When mixed with polysaccharide, less protein is needed to give the same effect. Furthermore, the polysaccharide produced by this strain minimizes the negative impact of heat on milk protein during pasteurization, according to Hassan. Essentially, heat breaks down protein, a process called denaturation, but the bacteria encapsulate protein, thereby maintaining more of its nutritional value.

This unique polysaccharide will also address a long-standing problem in the dairy industry--the formation of biofilm on milk processing equipment, Hassan noted. Milk bacteria attach to contact surfaces and form colonies that can resist traditional cleaning methods. The bacteria Hassan identified interfere with the formation of these biofilms, possibly mitigating this industrywide problem.

Because plaque is a classic case of biofilm developing on a person’s teeth, this discovery may also translate into better human hygiene, according to Hassan. Eating yogurt made with these bacteria may help reduce plaque and prevent tooth decay.

To explore this possibility, Hassan is collaborating with a researcher from University of Iowa’s School of Dentistry to apply for funding from the National Institutes of Health.

About the Dairy Science DepartmentThe Dairy Science Department prepares leaders in milk production and processing businesses and other aspects of dairy, a popular, critical and ever-growing component of the American food industry. Students can earn bachelor’s, master's and Ph.D. degrees in our program and have the opportunity to work on research teams that address issues that are important to dairy producers around the world through the department’s Extension service. 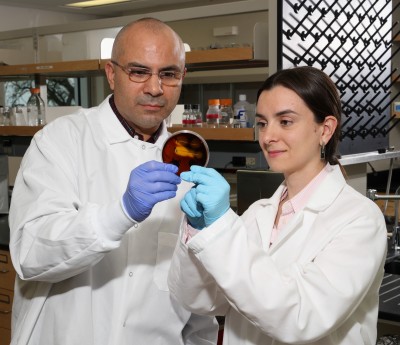 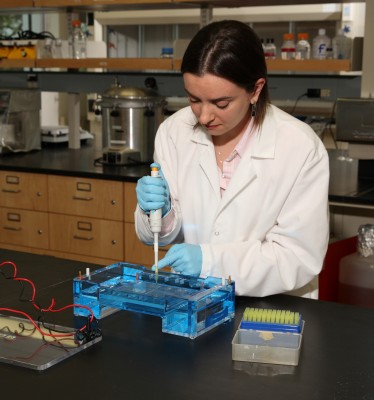 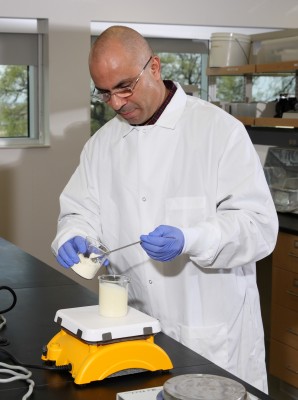