The exiled spiritual head and leader of the Tibetan people will address graduating students at commencement in June 2017. He will also speak at a second event on campus open to the public. 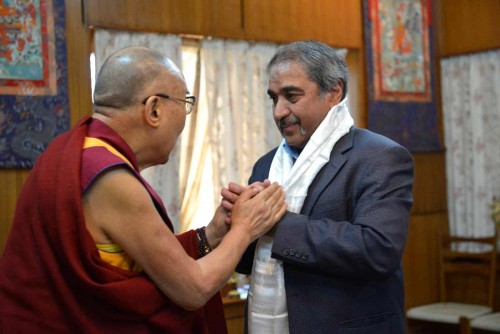 Newswise — The University of California San Diego, one of the top 15 research universities in the world and recognized for its contributions to the public good, in partnership with The Friends of the Dalai Lama Foundation, founded by Ven. Lama Tenzin Dhonden the Personal Emissary for Peace to His Holiness the 14th Dalai Lama, today announced that the exiled spiritual head and leader of the Tibetan people will offer the keynote address at the invitation-only UC San Diego All Campus Commencement June17, 2017. His Holiness the 14th Dalai Lama will also speak June 16 at a second event, which will be open to the public. This will be his first 2017 U. S. tour stop.

“We are honored to host His Holiness the 14th Dalai Lama at UC San Diego and thankful that he will share messages of global compassion with our graduates and their families, as well as with a broad public audience,” said Chancellor Pradeep K. Khosla. “A man of peace, the Dalai Lama promotes global responsibility and service to humanity. These are the ideals we aim to convey and instill in our students and graduates at UC San Diego.”

In 1989, His Holiness was awarded the Nobel Peace Prize for his nonviolent struggle for the liberation of Tibet. He also became the first Nobel laureate to be recognized for his concern for global environmental problems. His Holiness has travelled to more than 62 countries spanning six continents, receiving over 84 awards, honorary doctorates, prizes and other recognition of his message of peace, nonviolence, interreligious understanding, universal responsibility and compassion. He has also authored more than 80 books.

Chancellor Khosla added, “We are grateful to Lama Tenzin Dhonden for making the visit of His Holiness to UC San Diego possible. In 2012, he spoke at our campus; we are so pleased that His Holiness will be here again in 2017.”

“This shall be a very special visit. San Diego loves His Holiness. His Holiness will come to San Diego to share an authentic message of peace and human value as the students enter their professional lives. The seeds of kindness and compassion shall sprout through their future work and spread these basic values throughout the world. Parents and members of the community will be able to share the celebration of graduation while receiving this message,” said Lama Tenzin Dhonden.

Friends of the Dalai Lama is an independent 501(c)(3) nonprofit organization. Since 2000, Lama Tenzin has personally overseen the creation and planning of large-scale and elite events held at public and private venues throughout the United States for His Holiness. Lama Tenzin founded Friends of the Dalai Lama to be fully dedicated to assisting His Holiness in sharing his vision and message of peace and compassion with the world.

His Holiness, Tenzin Gyatso, describes himself as a simple Buddhist monk. He was born July 6, 1935 to a farming family in a small hamlet located in Taktser, Amdo in northeastern Tibet. At the very young age of two, the child (who was named Lhamo Dhondup at that time) was recognized as the reincarnation of the previous 13th Dalai Lama, Thubten Gyatso. The Dalai Lamas are believed to be manifestations of Avalokiteshvara or Chenrezig, the Bodhisattva of Compassion and the patron saint of Tibet. Bodhisattvas are believed to be enlightened beings who have postponed their own nirvana and chosen to take rebirth in order to serve humanity.

Below is the 2017 UC San Diego commencement weekend schedule. To learn more, visit the All Campus Commencement website.

Note to Media: Press credentials will be required for all reporters and photographers. To register for press credentials, contact Christine Clark at 858-534-7618 or [email protected]. Security for the Dalai Lama will be managed by the U.S. Department of State, which will determine security guidelines. More information to come.

Since the year 2000, Lama Tenzin has personally overseen the creation and planning of large-scale and elite events held at public and private venues throughout the United States for His Holiness. He has developed a specific protocol to ensure the proper arrangements for the participation of His Holiness in a variety of events. Based on his extraordinary experience and to fulfill the need for transparent organization of special events, Lama Tenzin has founded Friends of the Dalai Lama to be fully dedicated to assisting His Holiness in sharing his vision and message of peace and compassion with the world.

Friends of the Dalai Lama (FODL) is an organization that facilitates the participation of His Holiness the Dalai Lama in public and private events. The organization’s efforts are based on Six Core Value Elements that enable each audience to gain a deeper and actionable understanding of His Holiness’ message on Human Values, Secular Ethics, Inter-Religious Harmony, and Global Peace, for the sake of humanity.

The Friends of the Dalai Lama’s balanced approach focuses on benefiting the organizers, the participants, the attendees and the audience at large by promoting the intellectual and actionable understanding of His Holiness’ global message. The organization’s goal is to inspire society to act in compassionate ways to create a better world. For more information, please visit: FriendsoftheDalaiLama.org