The 20th Anniversary of the Hubble Space Telescope's STIS Instrument 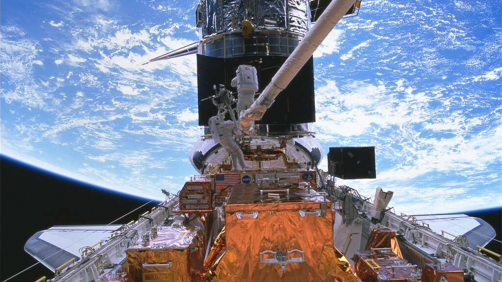 During the second servicing mission to Hubble Space Telescope, astronaut Steve Smith (on the robotic arm) guides the Space Telescope Imaging Spectrograph (STIS) into position while Mark Lee assists. The installation took place during STS-82, the 22nd flight of the Space Shuttle Discovery, in February 1997. 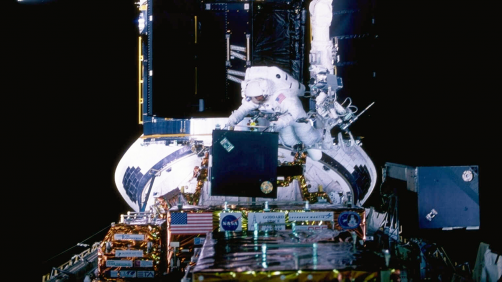 Astronaut Steve Smith carefully removes STIS from the protective enclosure that carried it into orbit aboard the Space Shuttle Discovery. 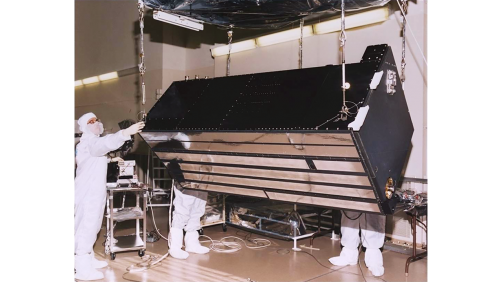 Engineers at Ball Aerospace in Boulder, Colorado, examine STIS prior to its flight aboard STS-82, the second servicing mission to Hubble Space Telescope.

THE 20TH ANNIVERSARY OF THE HUBBLE SPACE TELESCOPE'S STIS INSTRUMENT

Newswise — Happy 20th birthday to Hubble's Space Telescope Imaging Spectrograph (STIS)! In February 1997, astronauts installed STIS on the telescope during the second servicing mission. The highly versatile and productive instrument combines a camera with a spectrograph, which separates light into its component colors-or wavelengths -- to provide a "fingerprint" of the object being observed. This tells us about the object's temperature, chemical composition, density, and motion. Spectrographic observations also reveal changes in celestial objects as the universe evolves. STIS has also pioneered the field of high-contrast imaging-the art of capturing faint objects (such as planets, disks, and outflowing jets) next to very bright ones (such as the stars they accompany). The instrument is sensitive to a wide range of wavelengths of light, from ultraviolet through the optical and into the near-infrared. STIS science has illuminated a multitude of different astronomical topics. Below are some examples, but this is not meant to be an exhaustive list.

Determining the Masses of Black Holes in the Centers of Galaxies

Astronomers used STIS to conduct a census of more than 30 galaxies to look for evidence of massive black holes at their centers. STIS precisely measures the speed of gas and stars around a black hole, and this yields information about its mass. The findings presented a broad picture of a galaxy's evolution and its relationship to the growth of the massive central black hole. Hubble evidence favors the idea that titanic black holes did not precede a galaxy's birth, but instead co-evolved with the galaxy by trapping a surprisingly exact proportion of the mass of the central hub of stars and gas in that galaxy.

Tracing the Evolution of the Intergalactic Medium

Astronomers have long sought the vast quantities of hydrogen that were cooked up in the Big Bang but that somehow seemingly managed to disappear. This gas accounts for nearly half of the "normal" matter in the universe-the rest is locked up in galaxies. In an extensive search of the nearby universe, astronomers using STIS have definitively found this missing matter in the space between the galaxies. Called the intergalactic medium, this space extends from just outside our Milky Way galaxy to the most distant regions of space observed by astronomers. STIS observations of the local intergalactic medium showed that the missing hydrogen is still out there in very diffuse clouds in between the galaxies. This confirmation sheds new light on the large-scale structure of the universe and provides information on how galaxies built up over time. It also confirms fundamental models of how so much hydrogen was manufactured in the first few minutes of the universe's birth in the Big Bang.

Understanding the Components of the Galactic Halo

A halo of very hot gas surrounds the Milky Way galaxy. Because the gas is so highly energized, or ionized, it is only visible in spectral features seen in ultraviolet wavelengths with an instrument like STIS. With its extremely high spectral resolution, STIS looks at the spectral features of the atoms in each of the many layers of gas to help scientists identify and understand the complexity of the halo structure. Besides the very hot gas that is trapped in the halo, some gas is falling into the Milky Way from the area between galaxies, known as the intergalactic medium. Other gas in the halo comes from star formation in the disk of the Milky Way. Supernovae and winds from stars can blow this material out of the plane of the Milky Way, up into the Galactic halo. This gas cools and gets denser, and some of it rains back down in what is often described as "the Galactic fountain." STIS helps scientists understand these complex processes.

Unraveling the Structure of the Interstellar Medium

The interstellar medium is everything between the stars. It's typically very low-density material, which is extremely difficult to study. With its ultraviolet sensitivity and exceedingly high spectral resolution, STIS is a premier instrument for understanding this space. Scientists use stars or other bright sources as background light to view the intervening material. They "see" it indirectly through the absorption of the background light. The interstellar medium is not entirely uniform. There are places it is denser, places where it is less dense, and different clumps move at different velocities. STIS provides the fine velocity information to analyze the details of the interstellar medium. Using STIS, scientists can determine the physical conditions and separate out components from different densities and types of gas along the line of sight.

Characterizing the Atmosphere of a World around Another Star

Astronomers using STIS made the first direct chemical analysis of the atmosphere of a planet orbiting another star. This opened up an exciting new phase of extrasolar planet exploration, where astronomers can compare and contrast the atmospheres of planets around other stars, and search for chemical biomarkers of life beyond Earth. The planet orbits a sun-like star called HD 209458. Its atmospheric composition was probed when the planet passed in front of its parent star, allowing astronomers for the first time ever to see light from the star filtered through the planet's atmosphere. Scientists detected the presence of sodium in the planet's atmosphere. They actually saw less sodium than predicted for the Jupiter-class planet, leading to one interpretation that high-altitude clouds in the alien atmosphere may have blocked some of the light.

In 1984, Beta Pictoris was the first star discovered to host a bright disk of light-scattering circumstellar dust and debris. Ever since then, the 20-million-year-old star has been an object of intense scrutiny with Hubble and with ground-based telescopes. Astronomers used STIS in 1997 and 2012 to take the most detailed pictures to date of the large, edge-on, gas-and-dust disk. Astronomers found that the disk's dust distribution had barely changed over 15 years, despite the fact that the entire structure is orbiting the star like a carousel.

Identifying liquid water on other worlds is crucial in the search for habitable planets beyond Earth. STIS imaging shows suspected water plumes erupting from Jupiter's icy moon Europa. Astronomers observed these finger-like projections while viewing Europa's limb as the moon passed in front of Jupiter. Europa is a plausible place for life to have developed beyond Earth. If the venting plumes originate in a subsurface ocean, they could act as an elevator to bring deep-sea water above Europa's surface, where visiting spacecraft could sample it, study its habitability, and even look for life. This offers a convenient way to access the chemistry of that ocean without drilling through miles of ice.

R136 is a very massive and young dense star cluster in the Tarantula Nebula within the Large Magellanic Cloud, a neighboring galaxy to our Milky Way. Only Hubble can resolve the individual stars in the dense core, which is only a few light-years across and less than 2 million years old. Astronomers used STIS to obtain ultraviolet spectra of the individual hot luminous stars in the core and showed in 2016 that there are nine stars with masses over 100 times the mass of the sun. The detected stars are not only extremely massive, but also extremely bright. Together these nine stars outshine the sun by a factor of 30 million. This discovery has led astronomers to examine the 20 years' worth of STIS observations available in the Mikulski Archive for Space Telescopes (MAST) for further examples of monster stars in more distant star clusters. Some have recently been found in the dwarf galaxy NGC 5253, and the search continues for more examples.

Unlocking the Secrets of the Massive Star Eta Carinae

The volatile, erupting pair of massive stars called Eta Carinae has long intrigued astronomers. In 2009, STIS analyzed the ejecta from an eruption seen in the late nineteenth century, resolving the chemical information along a narrow section close to the binary. The resulting spectrum showed iron and nickel that had been cast off in the nineteenth century. STIS also revealed the interior material being carried away by the ongoing, colliding winds from Eta Car A, the primary star, and those of Eta Car B, a hotter, less massive star. A very faint structure, seen in argon, is evidence of the interacting winds excited by ultraviolet radiation from Eta Car B. Eta Car A is one of the most massive and luminous stars visible in the night sky. Because of the star's extremely high mass, it is unstable and uses its fuel very quickly, compared with other stars. Such massive stars also have short lifetimes, and astronomers expect that Eta Carinae will explode as a supernova within a hundred thousand years.

Deciphering the Composition of Supernova 1987A

Thirty years ago, astronomers witnessed one of the brightest stellar explosions seen from Earth in more than 400 years. The titanic supernova, called SN 1987A, blazed with the power of 100 million suns for several months following its discovery on February 23, 1987. Ten years later, STIS provided an unprecedented look at the light-year-wide ring of glowing gas surrounding SN 1987A. The long-slit spectrograph viewed the entire ring system, dissecting its light and producing a detailed image of the ring in each of its component colors that correspond to nitrogen, hydrogen, and sulfur. By dividing the ring into its component elements, astronomers put together a picture of how the ring was created.

Measuring the Outflow from the Heart of an Active Galaxy STIS measured the velocities of hundreds of gas knots streaming at hundreds of thousands of miles per hour from the nucleus of galaxy NGC 4151, thought to host a supermassive black hole. This was the first time the velocity structure in the heart of an active galaxy was mapped so precisely so close to its central black hole.

For more information on the Hubble mission and the servicing missions that made STIS possible, visit: