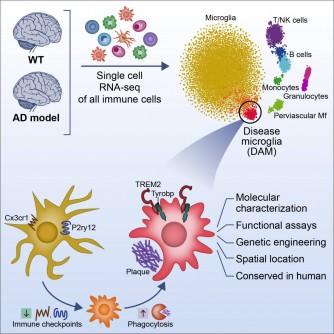 Newswise — Alzheimer’s disease is a neurodegenerative disease manifested by various neuronal pathological processes and a significant decline in brain function. Aggregates of beta-amyloid protein (“plaques”) accumulate within and between brain cells. Due to both structural changes and the weakening of chemical communication pathways, the junctions of neuronal networks (synapses) are lost. In addition, the cytoskeletal proteins of the axons lose their normal structure, impairing their function and causing massive neuronal death.

The brain is a fragile and unique organ that has its own specially tailored immune system, separate from the rest of the body. The primary role of the brain’s immune cells, called microglia, is to recognize, disassemble, and dispose of various substances that do not function properly in the brain, from dying cells to various cell debris and protein aggregates. Yet microglia activity is under tight regulation to allow them to dispose of waste without harming adjacent healthy neurons that retain important information. The gamut of their activity – from essential immune function to the risk of damaging healthy neurons due to hyperactivity – is well balanced in young healthy individuals, but might become a disadvantage in aging and under neuropathological conditions. A key question is, why are the brain’s resident immune cells not effective in repairing the damage associated with Alzheimer’s disease?

Alzheimer’s is often associated with local inflammation. In the absence of a clear understanding of the contribution of the systemic and brain immune cells to disease pathology, many scientists have interpreted the local brain inflammation that accompanies Alzheimer’s disease as a negative outcome of excessively aggressive microglia and the uncontrolled entry of immune cells from the periphery into the brain. Anti-inflammatory treatments were therefore attempted, without success, leaving researchers in the field puzzled as to the function of immune cells in neurodegenerative diseases.

Prof. Michal Schwartz of the Weizmann Institute of Science’s Department of Neurobiology has shown over the years that mobilizing cells from the systemic immune system does not always cause harm – and in fact, if well controlled, can even help in coping with various brain pathologies. But the question regarding the role of the brain’s own immune cells, the microglia, remains open: are they, themselves, useful? Useless? Or, perhaps, harmful?

Prof. Schwartz, together with Prof. Ido Amit of the Department of Immunology and members of their research groups – postdoctoral researchers Drs. Hadas Keren-Shaul and Assaf Weiner, and research students Amit Spinrad, Orit Matcovitch-Natan, and Raz Dvir-Szternfeld – now provide an answer to this question, along with a new research approach toward finding ways of treating Alzheimer’s.

The scientists studied a genetically engineered mouse model of the disease, whose genetic makeup includes five mutant human genes that cause an aggressive form of Alzheimer’s. The brains of these mice exhibit similar features to those that take place in the brains of humans suffering from Alzheimer’s. A significant obstacle to understanding the roles of immune cells in Alzheimer’s and other neurodegenerative diseases is the ability to accurately distinguish between similar cells with different functions, and thus understand who is a friend and who is a foe. The scientists employed advanced single-cell genomic sequencing technology – a “genetic microscope” developed in Prof. Amit’s lab in recent years – which enables scientists to fully sequence the genetic material of individual cells, allowing them to identify the unique function of these immune cells, even when they are extremely rare – in other words, separating the wheat from the chaff.

In this study, the scientists sequenced the RNA content of all the immune cells in the brains of the mice with Alzheimer’s – an endeavor that, until very recently, could not have been undertaken. Since Alzheimer’s is a progressive disease, the team repeated this experiment at different points in time during the disease’s progression, and compared the results with those from healthy mice. This led them to a fascinating finding: a subset of unique microglial cells not found in healthy mice, and which gradually change as the disease progresses. They called these cells disease-associated microglia (DAM).

The scientists found that the development of this unique type of cell depends on the reduction in the expression of regulatory proteins (checkpoints) that restrain microglia activity in the brain, and an increase in the expression of a protein complex that recognizes the accumulation of foreign lipids (fat-like molecules) and dead cells, including a protein called TREM2. A mutation in this protein is accompanied by an early – and dramatic – onset of the disease.

When the researchers, in collaboration with Prof. Marco Colonna of the Washington University School of Medicine in St. Louis, used an Alzheimer’s mouse model that does not express TREM2, the microglia failed to acquire the repair pathways of the DAM cells to remove the beta-amyloid plaques. An examination of the brains of the Alzheimer’s mouse model and a postmortem of Alzheimer’s disease patients revealed that these unique cells are located in close proximity with aggregates of amyloid plaques, suggesting a connection between the mechanism that leads to the activation of these unique microglia and their mode of activity. In fact, the newly discovered microglia express many proteins that have been previously classified as disease “risk markers” in Alzheimer’s patients, which highlight  their important beneficial role in these patients. In other words, mutations in proteins expressed by these cells cause dysfunction of plaque disposal and are therefore accompanied by an earlier onset and more severe disease.

“This broad set of findings,” says Prof. Amit, “leads us to the current understanding that a certain [genetic or environmental] failure in the process of downregulating the expression of the regulatory proteins [checkpoints] does not allow for sufficient upregulation of repair pathways, leading to the inability of the DAM cells we identified to appropriately perform their plaque-disposal tasks.

“This is a completely new concept in comprehending Alzheimer’s disease, based on data-driven models that allow for a mechanistic understanding of the central role of microglial cells in the disease, and on the insight that microglial checkpoints, which are imperative for normal function, become an obstacle in the diseased brain.”

These discoveries signify new potential targets in the search for an Alzheimer’s therapy, according to Prof. Schwartz: “By identifying key proteins that restrain microglia transition to become DAM, we will search for molecular ways to selectively reduce their expression/activity, thereby enhancing the repair pathways. In turn, this would lead to the acceleration of DAM cell development, an increase in their number and efficiency in removing ‘plaque’ in the brain, and, possibly, to curbing various disease symptoms. These, as well as targets that activate their phagocytic pathways, might serve as potential new targets for drug development.”

“Further,” says Dr. Keren-Shaul, one of the study’s lead authors, “our current studies are focusing on identifying the optimal molecules to target.”

“This challenge is central to the current investigations of our research groups,” say the two team leaders.

Prof. Michal Schwartz’s research is supported by the Weizmann-Tanz Collaboration for Research in Alzheimer’s Disease; Sonia T. Marschak, Lincolinwood, IL; the Consolidated Anti-Aging Foundation; the Nathan Cummings Foundation; and the European Research Council. Prof. Schwartz is the incumbent of the Maurice and Ilse Katz Professorial Chair of Neuroimmunology.