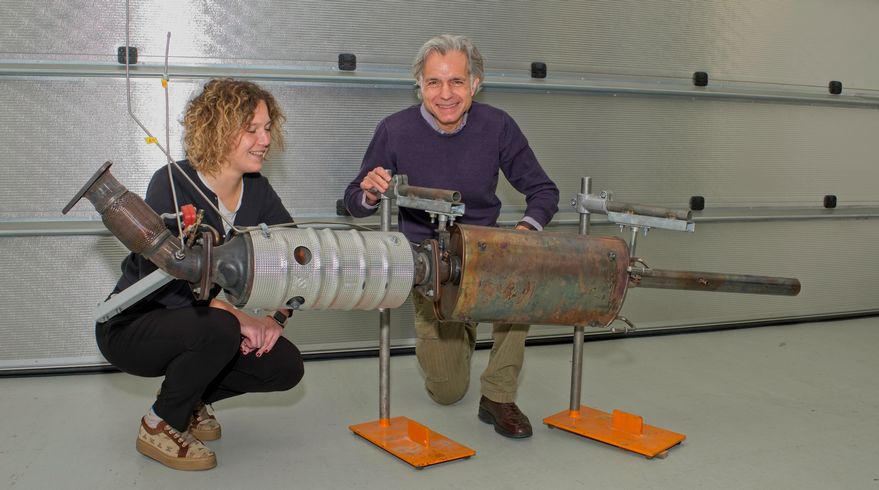 Viola Papetti and Panayotis Dimopoulos Eggenschwiler calculated, when a catalyst converter e.g. in a plug-in hybrid car begins to work after a cold start.

Newswise — From January to September 2019, almost 17,000 hybrids and plug-in hybrids were redeemed in Switzerland – an increase of 60 percent over the previous year. These cars can drive a few kilometers through the city electrically. They only need the combustion engine on the outskirts of the city when the driver accelerates onto the motorway or country road. The problem here is that the engine makes a cold start at high revs and engine load – quite differently than was previously the case.

Can exhaust gas purification keep up with this? Can the catalytic converters that we have been using since the 1980s be used in such cases? Viola Papetti and Panayotis Dimopoulos Eggenschwiler have calculated this with a specially developed mathematical model. And they offer recommendations on how cat­alysts could be preheated in the future.

Only a hot catalyst works

During a cold start, the engine pushes hot combustion gases through the cold catalytic converter. The catalytic converter must gradually warm up in order to develop its chemical cleaning effect. As long as it is cold, carbon monoxide, nitrogen oxides (NOx) and unburned hydrocarbons penetrate unhindered into the outside air. The good emission values of modern Euro 6 vehicles are only achieved with a warm catalytic converter. The differences are drastic: in the first 5 minutes after a cold start, a vehicle emits more pollutants than a 1000 km, non-stop, drive with a warm engine.

Chemistry and heat exchange in the catalytic converter

For their model calculations, the research­ers chose a typical catalytic converter for a 2.0-litre petrol engine. Using the OpenFOAM simulation program, they computed how the hot exhaust gases heat up the ceramic honeycomb of the catalyst and the catalytic cleaning layer known as the “washcoat”. At first, the catalyst is only “heated” by the hot gases, then the heat gradually pene­trates the ceramic and the sheet metal shell of the catalyst. A little later, the chemical reaction sets in: the pollutants are chemically decomposed on the washcoat. They provide additional heat.

The researchers’ model computations start on a winter day at minus 13 degrees Celsius. Nothing happens in the first 30 seconds of a car journey. Then the first quarter of the catalyst begins to heat up. After one minute, warming begins in the second quarter; only two minutes after starting the engine does the third quarter warm up. It takes a total of three and a half minutes for the catalytic converter to heat up to three quarters and clean all of the engine’s exhaust gases at 140 degrees Celsius.

Scenario for hybrids and plug-in hybrids

The researchers repeated the model calculation for a hybrid car. Suppose the catalytic converter had already been warm once and has now cooled down in stop-and-go traffic because the car was on the road powered only by its electric motor. The “cooled” catalytic converter still has a residual temperature of just under 90 degrees; in this case, too, it is only fully heated after three minutes.

The bad news: even the most modern plug-in hybrids emit toxic pollutants for minutes after each cold start. This could become a problem over the next few years if the EU continues to tighten its emissions regulations. The problem can only be solved if the catalytic converter is heated up as soon as the combustion engine starts. Or even better: before it starts. How could that work?

“I see three possibilities,” says Empa researcher Dimopoulos Eggenschwiler. “The engine could be used to produce hotter exhaust gases, which would cost additional fuel. One could also use the hybrid battery in the cars to preheat the exhaust gases electrically. And the washcoat of the catalytic converter could be preheated with the aid of microwave radiation so that the chemical reaction starts faster.” The question remains: which method costs the least energy?

The researchers have also computed this: When cold starting in the city, it is more efficient to preheat only the exhaust gases. A cold start on the motorway would cost too much energy because of the large amount of gas. Here it is worthwhile to preheat the washcoat directly. “In the end, only a combination of all methods produces the best results,” says Viola Papetti, who carried out the simulation computations.

“And there is one more thing”, says Panayotis Dimopoulos Eggenschwiler at the end of our conversation. “We can also apply our calculation meth­od to battery electric vehicles.”

The Empa researchers’ simulation program can in fact not only calculate the heat distribution in the exhaust tract of a combustion engine, but also that in a lithium-ion battery. This makes the tool perfectly suited to optimizing the cooling technology of electric cars – also during charging. Good rapid charging systems can only be realised with optimum temperature monitoring and cooling.