The Perfect Shot of Espresso Every Time with Chemistry 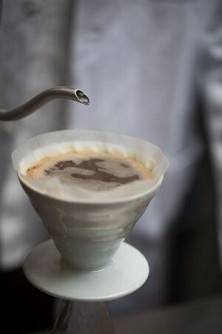 The perfect shot of espresso every time with chemistry

Newswise — NEW ORLEANS, March 21, 2018 — The average American drinks more than three cups of coffee a day, contributing to a $40 billion industry in the U.S. alone, according to the National Coffee Association. But not all coffee is created equal; flavor profiles vary. Focusing on espresso, scientists say they have now unlocked the key to creating consistent cups of java.

“One day you might have a good cup of coffee and the next day you might not. From a scientific perspective, it has always puzzled me why we couldn’t do the same thing twice,” Christopher H. Hendon, Ph.D., says. “My research looks at every variable that goes into making espresso coffee, from grinding and packing the ground coffee, to water pressure and mineral chemistry. If every single café in America were to implement the procedure, it would save the U.S. $300 million a year by reducing the amount of coffee beans used to make espresso, while improving reproducibility.”

Hendon’s research is some of the first of its kind, earning him the title, “Dr. Coffee.”

Previous research in his lab explored several variables that impact the reproducibility of espresso. For example, water hardness varies throughout the U.S., and this can affect flavor. “Hard” water with a high amount of magnesium and calcium causes coffee to have a stronger flavor than “soft” water This is because compounds such as caffeine stick to magnesium during the brewing process. Hard water can also have high amounts of bicarbonate, which causes coffee to have a more bitter flavor.

The freshness of the coffee beans can also impact how tasty a cup of coffee is. Freshly roasted coffee contains carbon dioxide and other compounds that easily evaporate. Over time, these volatile compounds escape the beans, resulting in a less flavorful cup of coffee. Lower temperature slows the rate of evaporation, which explains why storing coffee in the fridge extends its shelf life.

Hendon’s team at the University of Oregon has been focusing on the process of grinding coffee beans and the brewing method itself. “There is a point in grinding coffee beans when you make too many small particles, which stick together and result in reduced extractions,” Hendon says. Although smaller particles mean a greater surface area, which should result in consistently tasty espresso, there is a critical point at which smaller isn’t better. For this reason, the grinders used can have a significant impact on the flavor of the resulting cup of coffee.

By collaborating with baristas, Hendon developed a method by which they can achieve their desired flavor profile consistently. Hendon proposes an optimization process achieved by altering grinding size and brew ratio. “By predetermining the coffee-to-water ratio, as well as the water pressure, the maximum extraction can be systematically determined,” he says. “The barista can then iteratively improve their espresso reproducibility, while reducing waste coffee mass.”

Now, he plans to take his work in another direction, focusing on the impact of temperature on grinding coffee. Specifically, he explains that cooled coffee grinds more uniformly and would therefore impart greater control on the resulting cup of joe.

Hendon’s work was funded by the University of Oregon.

Optimizing espresso: Chemical and physical considerations, and a step towards reproducibly tasty coffee

Although unassuming, coffee as a collective industry accounted for $225 B USD (1.5% GDP) traded within the USA in 2015. One major contributor to this value was the physical production and consumption of coffee, itself. Espresso, a method of extraction at high temperature and pressure, is one of the most employed for producing the beverage. Under these conditions, the coffee/water interface is complex, highlighting the numerous physical and chemical considerations in coffee extraction under pressure. Consistent espresso is pushed further from reach due to our dependence on the equipment used in the manufacturing of espresso, where water chemistry, grinder efficiency, and espresso machine play key roles in achieving reproducibly delicious espresso.

The origin of espresso variability is inhomogeneous extraction from the espresso puck. The resultant espresso bed extracts inefficiently, imparting negative flavors and wasting up to 40% of the coffee puck. We conjecture that the solution to this variability was to minimize both chemical and physical variables that play operative roles in espresso.

This talk details an exciting numerical approach to achieve reproducible espresso based on experimental extraction kinetics of representative compounds in coffee, as well as physical measurements of particle sizes. Using chemical arguments we arrive at an analytical method for achieving high consistency espresso while minimizing coffee wastage, and demonstrate the synergy between coffee, math, and chemistry.