The Structure of the Smallest Semiconductor Was Elucidated

The smallest semiconductor composed of only 27 atoms, the Cd14Se13 cluster, has an interesting core-cage structure 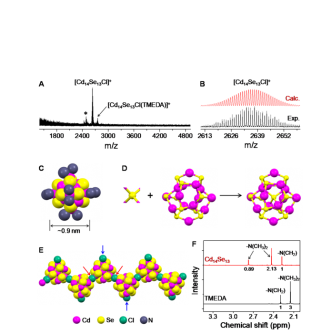 Newswise — A semiconductor is a material whose conductivity lies somewhere between that of a conductor and an insulator. This property allows semiconductors to serve as the base material for modern electronics and transistors. It is no understatement that the technological progress in the latter part of the 20th century was largely spearheaded by the semiconductor industry.

Today, technological advancements in semiconductor nanocrystals are currently ongoing. For example, quantum dots and wires from semiconducting materials are of great interest in displays, photocatalytic, and other electronic devices. However, numerous aspects of the colloidal nanocrystals are still remaining to be understood at the fundamental level. An important one among them is the elucidation of the molecular-level mechanisms of the formation and growth of the nanocrystals.

These semiconducting nanocrystals are grown starting from tiny individual precursors made of a small number of atoms. These precursors are called “nanoclusters”. Isolation and molecular structure determination of such nanoclusters (or simply clusters) have been the subject of immense interest in the past several decades. The structural details of clusters, typical nuclei of the nanocrystals, are anticipated to provide critical insights into the evolution of the properties of the nanocrystals.

Therefore, producing nanoclusters with homogenous sizes is important. “Magic-sized nanoclusters, MSCs”, which are preferably formed over random sizes in a uniform manner, possess size range from 0.5 to 3.0 nm. Among these, MSCs composed of non-stoichiometric cadmium and chalcogenide ratio (non 1:1) are the most studied. A new class of MSCs with a 1:1 stoichiometric ratio of metal-chalcogenide ratio have been under spotlight owing to the prediction of intriguing structures. For example, Cd13Se13, Cd33Se33 and Cd34Se34, which consist of an equal number of cadmium and selenium atoms have been synthesized and characterized.

Recently, researchers at the Center for Nanoparticle Research (led by Professor HYEON Taeghwan) within the Institute for Basic Science (IBS) in collaboration with the teams at Xiamen University (led by Professor Nanfeng ZHENG) and at the University of Toronto (led by Professor Oleksandr VOZNYY) reported the colloidal synthesis and atomic-level structure of stoichiometric semiconductor cadmium selenide (CdSe) cluster. This is the smallest nanocluster synthesized as of today.

Synthesis of Cd14Se13 was accomplished after numerous previous failures with Cd13Se13, which always ended up in undesirable assemblies, making them impossible to characterize. Director Hyeon stated, “We found that the tertiary diamine and halocarbon solvent play a crucial role in achieving nearly single-sized, stoichiometric clusters. The tertiary diamine (N,N,N’,N’-tetramethylethylenediamine) ligands not only provide rigid binding with appropriate steric constraints but also disable the intercluster interactions due to the short carbon chain, leading to the formation of soluble Cd14Se13 clusters, instead of undesired insoluble lamellar Cd13Se13 assemblies.”

The dichloromethane solvent supplies chloride ions in situ to simultaneously achieve charge-balancing of the 14th cadmium ion, which allows for the self-assembly of the clusters to form (Cd14Se13Cl2)n. As a result, single crystals of adequate quality could be obtained for the researchers to determine the structure of the clusters. The composition of the clusters obtained from the single crystal X-ray diffraction data analysis was in very good agreement with the mass spectrometry and nuclear magnetic resonance data. The overall shape of the cluster was spherical with a size of about 0.9 nm.

While most other MSCs with non 1:1 metal-chalcogenide ratios tend to have supertetrahedral geometry, the new Cd14Se13 was found to possess a core-cage arrangement of constituent atoms. Specifically, the cluster comprised a central Se atom encapsulated by a Cd14Se12 cage with an adamantane-like CdSe arrangement. Such a unique arrangement of atoms opens the possibility of growing nanocrystals with unusual structures, which needs to be further explored in the future.

The optical properties of the cluster showed the presence of quantum-confinement effects with band-edge photoluminescence. However, the photoluminescence features related to defect states were prominent due to the ultra-small size of the clusters. The structure and the absorption peaks observed in the experiments were well supported by the density functional theory calculations.

The researchers created the Cd14Se13 cluster through an intermediate Cd34Se33 cluster, which is the next known large-sized stoichiometric cluster. Interestingly, both of these two clusters could be doped via substitution with a maximum of two Mn atoms, which illustrates the potential to realize dilute magnetic semiconductors with tailored photoluminescence properties. The computational results showed that the Cd sites bound to halides were more susceptible to Mn substitution.

The implications of this study may go well beyond the synthesis of single-sized semiconductor clusters, as the tertiary diamines of different chemical structures may be extended to other clusters. Synthesis and determination of the atomic-level structure of other clusters may eventually help understand the molecular-level growth mechanism of the semiconductor nanocrystals.

It was shown that the Cd34Se33 cluster could be kinetically stabilized through a ligand-exchange-induced size conversion process developed in this work. However, more efforts and new strategies are needed to improve the solution-state stability for the structure determination of the next large-sized cluster Cd34Se33, which is the critical nuclei for the cadmium selenide-based nanocrystal growth. It is hoped that further studies of the size-, structure-, and dopant-dependencies on the optoelectronic, photocatalytic and spintronic applications may open new directions to scientific research on the semiconductor clusters.