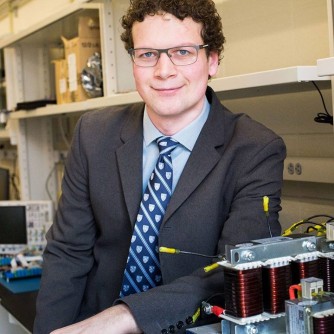 Newswise — Today’s electric vehicles and home renewable energy systems require several types of power converters, each taking up space and raising the cost. While most efforts to improve converters have focused on shrinking the size of the equipment, Assistant Professor of Electrical Engineering Matthias Preindl is reimagining the technology entirely: he’s designing virtual systems that have interchangeable converter modules and a software layer that controls the converter function. The result should require fewer electronics, speed up onboard charging, and cut costs.

Preindl recently won a prestigious National Science Foundation CAREER grant to support his work, which was inspired by virtualization that has become common in computer science and networks. The award, honoring exceptional junior faculty, will provide $500,000 over five years for research and development.

To understand how virtualization might work for power converters, consider the electric car. Today’s electric vehicles contain several types of power converters, each built for a specific task – an inverter works with the electric motor, DC-DC converters take power from the battery, another converter works between the power grid and the charger. Preindl is designing a way to avoid the need for several specialized pieces of converter equipment by replacing them with a stack of interchangeable autoconverter modules that can act as any type of converter when controlled from the virtual host.

“You’re unlikely to be charging and driving the vehicle at the same time, so you can use some of these modules during driving and then repurpose the same modules when you’re ready to charge the vehicle,” Preindl explained. “Instead of needing a certain rate of power to drive the car and to charge it, now I need only the power required to drive the car, and I can use a fraction of that power for fast-charging when the car is parked.”

Virtual modular power conversion should also increase the system's reliability. Today, when a converter component fails, the converter functionality is lost. By using autoconverter modules that can be assigned any converter task, Preindl can create a system that has redundancy, so when one module fails, another can take its place. “It's modular, it's scalable, it has a better reliability. There are several upsides if we are able to do this,” Preindl said.

Preindl’s novel design for high-efficiency, high-power-density modules and the use of virtual control software is also expected to cut the cost of electronics in electric vehicles by lowering the power electronic Volt-Ampere rating, which determines the size of converters needed. Preindl’s research so far suggests that using virtual modular power conversion can lower the Volt-Ampere rating for electric vehicle drivetrains by 20 to 30 percent. He expects a similar impact on home energy systems that draw power both from the power grid and from renewable energy sources or a battery. It’s unlikely that a home would need its full power capacity from its solar panels and its full capacity from the grid at the same time, so autoconverter modules could be repurposed by the virtual host as needed.

Columbia Engineering students will be evaluating the capabilities of virtual modular power conversion systems in two real-world conditions as part of the grant. For one test, students in Preindl’s lab will work on an electric drivetrain prototype for the Formula SAE electric vehicle design competition. A second student-driven project will work with an off-grid solar-powered irrigation plant in Senegal that makes excess energy available to the community for lighting and cooking.

Modularity is already being tested in DC-DC converters. Preindl and his students are taking the next step by expanding the concept across all types of converters. The virtual system could eventually help facilitate bidirectional energy flow between the grid and an electric vehicle or home system, potentially creating new opportunities for how grid power is stored.

Preindl, who joined Columbia Engineering in 2016, has been working on the next generation automotive powertrains for several years. His Motor Drives and Power Electronics Laboratory at Columbia works on improving the design and control of power electronic and motor drive systems, and has further applications in renewable energy and smart grids, for higher efficiency and performance.